In the world of Neverwinter there is no hundreds of keys to use, there is only few basic skills you have to remember: Q, E, R and 1-5. The game will explain how to use the various skills of your class, but in combat there are several other elements worth mentioning.

For example, every time you are in combat blue circle will be visible under your feet.

The most important thing, which is available from the beginning of the game is class tactics (dodging or defensing) activated by pressing the "Shift". With the right use of the tactics you'll be able to dodge or block most powerful blows and thus better support the team, or simply survive.

First thing you would want to dodge will be AoE enemy skills indicated in red.

AoE effects can have various shapes and appear in different plaves, not only under enemy itself. If you are not sure if given skill will hurt you or not it's always better to dodge.

In every fight you can see different numbers floating around your hero, companion, and the enemy, they are the damage and healing values along with various markings.

Floating text (damage) outgoing and incoming damage, healing done and received, and some additional information, all those have own color:

White: informative, , such as "Blocked" indicates that you have blocked an attack

In addition to the colors you can see few icons accompanying the above numbers:

Your character does not heal itself after the fight. To fill the HP after an exhausting fight or fall you have to use potions or skills. If you do not have the skills or medicinal, find the campfire and stand in it's area, you will quickly regenerate there.

Campfires can be replaced with use of item called Portable Altar.

When your HP drops below 50%, the screen begins to take red shade (the less life the more intense red) alerting you about risky situation and the need to heal.

If you have fallen in battle you will be in Near Death stage for maximum of 15 second. Now you can call for help with Shift+1 or simply die to reappear near closest campfire by pressing Shift+2. There is also an option to use Scrolls of life or Mass Life you can buy for Zen. 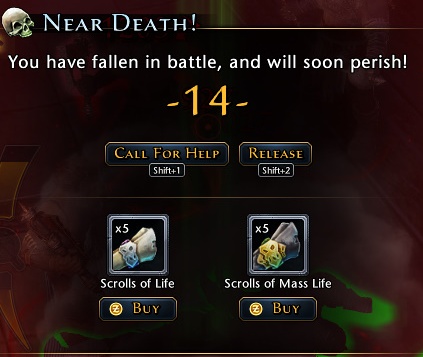 After the death you will notice a little silhouette icon under your character portrait, this indicates injury, and the more times you die the injuries are more serious, each causing different negative effects like slower movement caused by leg injury, less HP pool because of chest injury.

This condition can be removed by using Injury Kits, which have to be used as many times as many injuries you have. When you have some time you can leave you character for short while near campfire, after few minutes injuries should disappear one after another without using any kits.