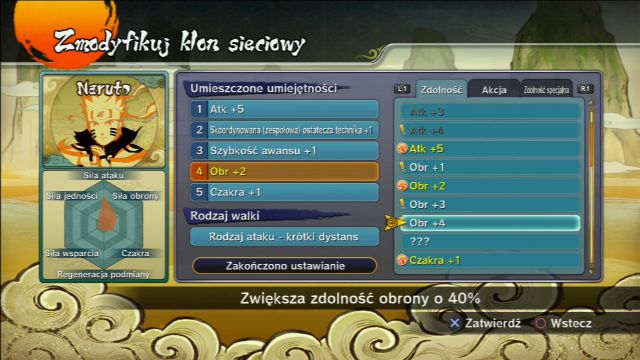 A network clone can be equipped with various cards, increasing its different stats.

A network clone is your "business card" for each player. After entering the Online menu, you can create one - it's nothing else as a character (or a group of characters, if you select support for him) steered by the computer. The difference is that you can also send the clone on a training, during which it will fight several battles, earn experience and has a chance to find various items, which can be used to modify the stats of the clone itself. Before you send it on a training, you can check its effectiveness by having a duel with it.

After sending your clone on a training, it will appear in someone else's world, as a part of his/her Ninja World Tournament - the player will be able to fight your clone, which will award it with experience / items, and if the player defeats it, he/she will be awarded with various items, as well as a copy of your clone. The clone can be equipped with various items, which increase his stats, like defense, attack, chakra regeneration, and so on.

You can also assign special cards to the clone, which will increase the likelihood of it using certain attacks during its bouts with other players. There are hundreds of items that can be assigned to a network clone. Those can be acquired doing almost any activity in the game - by playing matches in the Survival mode, fighting other players, or by completing Ninja Escapades and/or Ninja World Tournament. You can also earn some cards by fighting enemy network clones, which appear in your world. 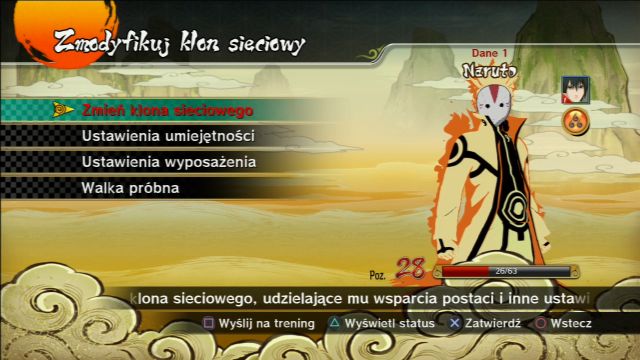 You can send the clone on a training.

As it was mentioned before, the clone can be send on a training, where it will be fighting with other players. Before you send him, you must know, that the training itself will last for several real-time hours. You can also abort the training before it's finished, but you will decrease the chance for the clone to receive rewards, and cut his experience gain. The longer the clone will be on a training, the more experience and the rarer the items it will get. The status of your network clone can be seen on the loading screens (if he is training, or if he completed it already), provided that you have connection to the Internet.