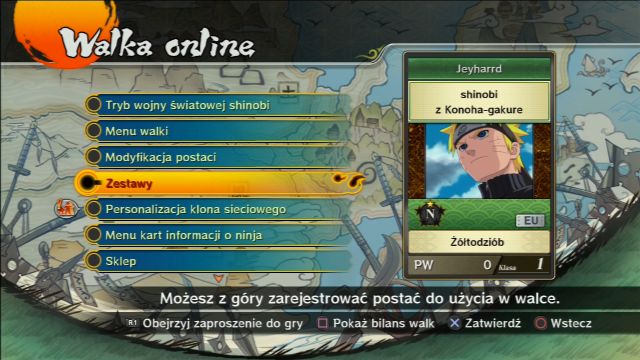 You begin with a "zero" ranking - by fighting with other players you can increase it.

Online gameplay offers various game modes, depending on your personal preferences. Those are: Shinobi World War and battle menu. The first one allows you to automatically join to other players and take part in a tournament. After selecting your character (individuals, without the usage of supports) each player will be located on the ladder and will be fighting other players, going through to the deeper parts of the ladder, closing on to the finals. Easy to guess, if you want to be the best, you will have to win all the encounters.

Battle menu allows you to choose from a variety of options, such as:

Unfortunately, despite the first thought coming to mind (after completing the Ninja World Tournament), there's no way to fight with 3 different players at the same time - regardless of the configuration (Free for All or 2 versus 2).

During your online adventure, you must remember about one thing - your enemies won't be fighting like your previous, computer-controlled foes. Just as you do, they will be constantly thinking about their moves - they will try to approach you in some way, force a substitution, to launch their powerful attacks when you can't dodge them, or they will lure you to attack them to catch you in a trap. You will have to do the same - analyze the enemy all the time, observe his chakra / health / substitution / Storm Bar all the time and adapt your tactics accordingly. You should also check the "Quick Tips" chapter at the beginning of this guide.

Unfortunately, there's one single thing that which spoils the entire online experience - out of the Earth, unheard of in different games lags. It does not matter whether you are fighting with someone from your own region (even the same country, or city) or if your enemy is living on the other side of the globe, nor the Internet connection - the lags can always (and probably will be...) happen. Another torment (but on the other hand some kind of leaver-protection) is the impossibility of leaving a tournament / league / shinobi world war before it ends (regardless of whether you will be fighting in it again or not) - there's nothing more entertaining than to watch several battles between players, when someone (or you yourself) has insane, a few second lags.

It's important to pay attention to this matter before the match starts - in the game lobby (before you confirm your readiness) you can check the latency of other players - if someone has a red icon near his name, it's a sign to leave the room as soon as possible and find another room. If all the icons are green, it means (at least in theory) that you will be able to have a peaceful, lag-free match.