Items in the game can be divided into two groups: ninja artifacts and bento. 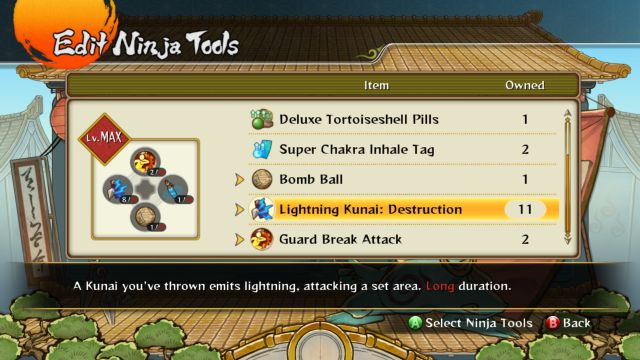 You can select your ninja artifact before the battle starts.

Those are the items you can use during the actual fight. The type and amount of items you can use must be determined before it begins - you have time for that after you've selected your character. There are basically two groups of ninja artifacts:

The selection of proper ninja artifacts can have a huge impact on the outcome of the entire fight - activating, for instance, Secret Book of the Mind's Eye (single player mode only) will give you a boost for several seconds, increasing the regeneration rate of your substitutions, allowing you to use them almost infinite amount of times during the effect. Another example may be a situation, in which you use a scroll increasing your attack, and at the same time you hit an enemy with a scroll which lowers his attack - it will give you a huge advantage, even if it's only for a few seconds. There's a whole bunch of different items, allowing for various tactics, and their usage is limited by the creativity of the player only. 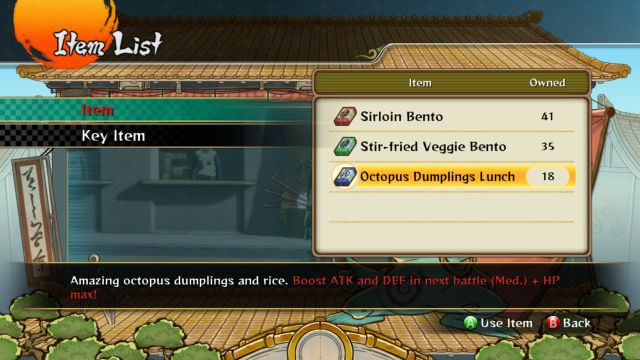 You can affect each character of your team with a different bento.

Bento allows you to increase the effectiveness of your character(s) during the following encounter - it's used during the single player modes only. There are various effects - it may be increase in defense and offense, decrease in chakra usage, or increase in chakra regeneration. Everyone will find something for himself.

Bentos are extremely important during the Ninja World Tournament (especially during the S+ rank), where you will have to face several rounds in row - by using a bento, not only will it increase the stats of your character, it will also replenish its health. In case of ninja world rounds, where you will be fighting with numerous characters, you can affect each character of your team with a different (or the same) bento.