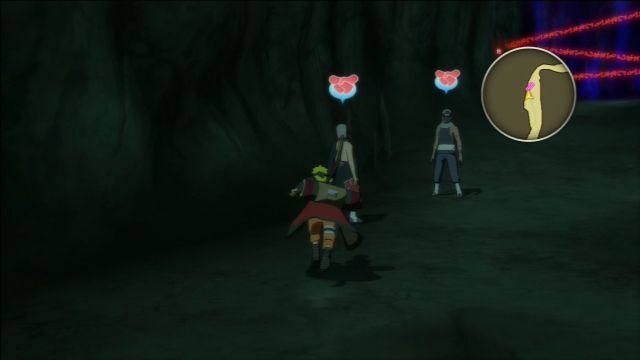 Another, second ally event unlocked after you've completed the preliminary round of Rank C tournament. To begin the quest, go to the tunnel on the right side (looking from the entrance to the cave, from the beach) - the same tunnel through which you were travelling to start the "Basking in the Limelight" event. At the very end of the tunnel you will find two ninjas, who you should remember, if you've finished Ninja Escapades. Those are Hidan and Kakuzu.

After accepting the task, you will learn that you have to pay 30,000 ryo for them to join you. You should have at least a few times more than that, so there's nothing else to do than to accept their proposition. As it will turn out, nothing comes for "free" - they wanted to outsmart you, that's why you have to fight them now.

Hidan, because he's the one you'll be fighting with, is extremely effective in close combat, but his combos are quite sluggish - you can stop them with ease by attacking him, prevent him from doing anything. You should always have 1-2 substitutions ready to get away if Hidan manages to get you in his combo. The duo would be a lot more deadly if they used their Ultimate Jutsu - they have a special jutsu, which does more damage than the "regular" ultimate ones. They can't use it however, as they are using Drive Type.

After defeating the enemies, you will have a short conversation, after which the duo will decide to join you after all. You will also receive: