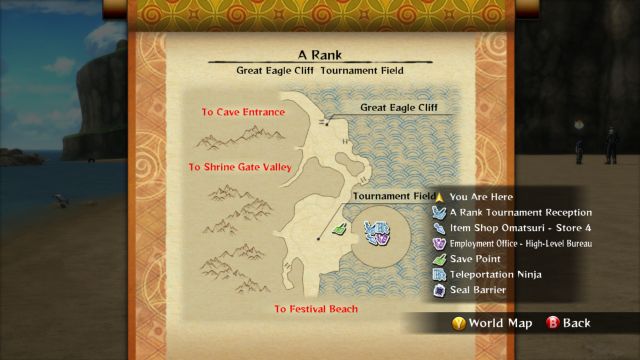 You should be familiar with this map if you've finished the story of Mecha-Naruto.

To take part in the Rank A Ninja World Tournament, start the "Ninja World Tournament" from the main menu and select the option to continue the game. You will be asked to select your character again, after which you will land on the beach again. During the cutscene you will learn that you have gained access to another part of the island (Rank A), and that you've unlocked the access to Challenges. To take part in them, go back to B Rank Tournament Reception - a nearby window will now be hosting an NPC with a list of challenges.

Rank A of Ninja World Tournament will be unlocked after you've finished the previous rank - B. The gameplay is fairly the same - you still have to play a qualifying round, after which there's a preliminary and finally main round, after which you will complete the B Rank of the tournament and gain access to the next one (S) and further section of the island.

To start your journey, go to Teleportation Ninja and select the option to teleport to A Rank Tournament Reception (Festival Plaza). You will be transported to a small building, inside of which most the events of A Rank tournament take place. You can use the opportunity and buy new items at two stores in this building. You can also complete Ally Events - "What Goes Around Comes Around", "Rock, Paper, Scissors" and "The Impressed Attacker". If you want to complete them, go to the "Ninja World Tournament - Ally Events" chapter.