It's time for the B Rank qualifying round and the first big surprise in the entire game - a gigantic difficulty level spike. If you've completed the previous rounds without a scratch, the game will catch you off guard. The enemies will mass-use their substitutions (and not once every 50 hits taken), dodges, blocks and they are overall way more effective in combat. 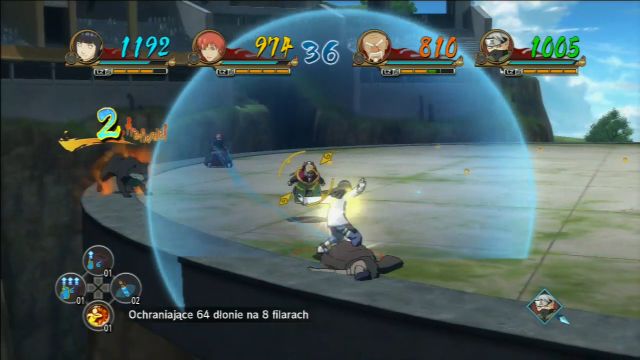 With the beginning of the Rank B tournament, obstacle characters will start to appear on the arena.

It seems that they start to focus the player character a lot more - previously you could have easily dragged one of the enemies to the side and smack him till he was dead, when the other two took care of each other, this time it's way more difficult to achieve. If you pick up awakening / ultimate jutsu orb, you can be certain, that 100% of the enemy's attention will be diverted to you, and they will swarm you with their attacks. Picking up this power-up can cost you a lot of Battle Orbs, but you can also earn huge amounts of them.

Aside from that, another novelty awaits you - Obstacle Characters. From time to time, on the arena, a random enemy (or enemies) will appear, who will attack anyone in his range - it can either be a huge wolf, a knight, or a weird monstrosity. Most of the attacks performed by those characters will deal huge damage, but observation will save the day. Just before they attack, a red outline of their attack will appear on the ground, symbolizing the range of the attack - if you will be outside of the red area, you won't take any damage. Also, if you can, you should try to drag your enemies into it, to earn some free Battle Orbs!

Besides those two mentioned things, the whole encounter is pretty typical - 3 rounds, with a single character from a team in each. The winner is the team which collects the highest amount of orbs. After the round is over, you will be automatically enlisted to the preliminary round, and you will unlock new Ally Events - "Mentor's Thoughts" and "Phantom and Worthy Cage".