After reaching the destination in the previous chapter, the action will move to Mecha-Naruto. After another series of cutscenes you will gain control over him - go to the same place you went with Naruto a few moments ago. After yet another series of cutscenes, you will learn, that Naruto and Mecha-Naruto had swapped with their bodies - Naruto's soul is now in the body of his mechanical alter-ego. After regaining control over the ninja, go back to the village, save the game and run down the stairs to initiate a conversation with Hinata. 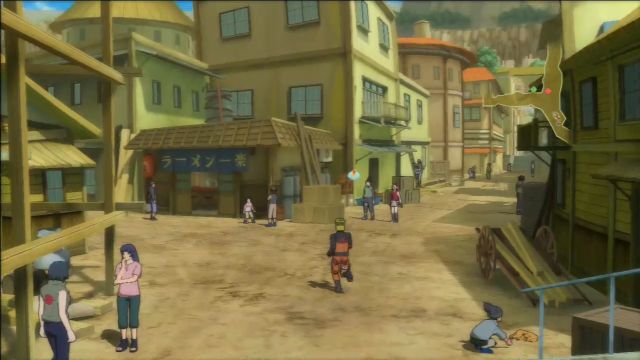 During the first moments Mecha-Naruto will only be able to walk.

Afterwards, you will regain control over Mecha-Naruto. Your task is to go to the center of the village, near the Ichiraku ramen store. After getting to the place, run to a group of ninjas standing on the crossroads, to start another conversation. You will now learn that you have to complete several tasks for Sakura. To do so, go to the Employment Office, which can be found in the square, near the lottery point (open up the map, if you can't find the office). To continue, go to the next chapter.