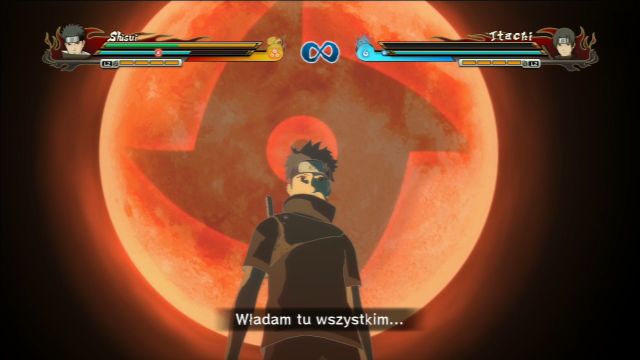 Shisui's Ultimate Jutsu is one of the most badass looking attacks in the whole game!

Your fight with Itachi will be quite an easy one, because the character you will be fighting with (Shisui) works in a similar manner, but he's a little more effective than your enemy. Shisui is deadly in close combat, and his Ultimate Jutsu operates in the same manner as that of Itachi's - the only difference is the attack's animation.

You will notice that your character differs greatly from all of the previous you had to fight with up now (in Ninja Escapades, of course). Shisui is very mobile, he jumps around the battlefield like a lightning, and despite the fact that his single attacks do rather little damage, it's very easy to perform his full combos (given his extreme speed and mobility) and link it with his jutsu, in which the youngster performs a series of quick ranged attacks. Such a combination will surely take a good chunk off the enemy's health and is trivial to perform.

While fighting with Itachi, you must be very careful about his clones - they move slowly, but due to inattention you can accidentally run into one of them, which will cost you a lot of health. If the enemy uses his Ultimate Jutsu, all you have to do is to simply jump away in any direction, or do a substitution.