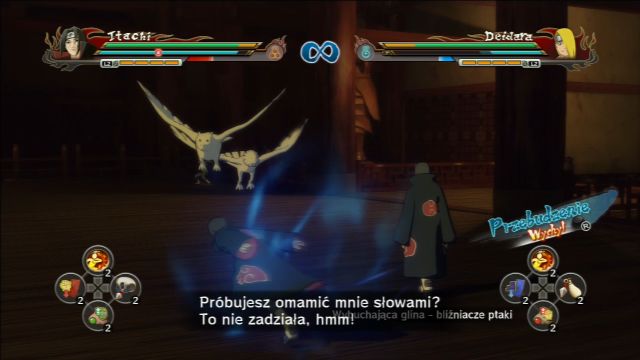 Do not let the enemy gain any distance from you at all costs.

This fight is very similar to the previous one, with only one difference - the roles will be reversed. Your character, Itachi, is strong in melee combat, while your enemy, Deidara, is extremely strong (and annoying) at long range combat - the bigger the distance between you too, the more you will struggle. You have to stick to the enemy at all costs and prevent him from gaining any distance - after this happens, he will swarm you with his explosive attacks, and there's a chance that you will lose a whole health bar before you are able to do anything.

Deidara is very vulnerable in close quarters, meaning that you shouldn't have any problems with him there - remember to make use of Itachi's jutsus, especially his "normal" one, in which he sends a clone to follow the enemy. When the clone gets closer to his target, it violently explodes, damaging the enemy. His ultimate jutsu has one of the shortest ranges in the game, but it can be easily applied by using two methods - shortly after dodging the attack (with substitution) and jumping behind the enemy's back, or by standing near his body (when he was knocked down) to activate it just as he is getting up (it's hard to time right, and the enemy can still run away if you do it perfectly, but it's possible.