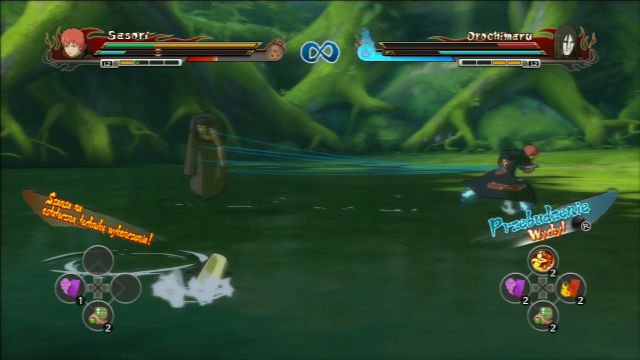 The enemy will hide under the water constantly, making it hard for you to lay any attack on him.

One of the most difficult fight in Ninja Escapades. The reason for that is the same which made the previous fight easy - you will be fighting using Sasori, who is effective on an very long range, whereas your opponent, Orochimaru, is extremely strong in melee combat. The enemy can easily jump past your puppet and get to your real body in a matter of seconds.

During this encounter you will be using your Chakra Rush almost constantly - use it offensively (which will make your puppet rush to the enemy) as well as defensively (to jump away from the enemy, who managed to get past your puppet and is heading your way). Sasori's Ultimate Jutsu is practically useless during this fight - your enemy is far too mobile for you to hit him with it (what makes things worse is that Orochimaru can jump into the water, which renders him immune to your attacks unless he emerges from it again), unless you manage to catch him doing any activity (like preparing to use his own jutsus). That is why you should only opt to use it at the end of the battle, to earn your bonus. The whole fight is extremely irritating, especially when you are trying to end the battle with a decent score, as well as finish the enemy with your Ultimate Jutsu.