This following chapter contains a complete list of achievements available in My Memory of Us. The descriptions will tell you whether it is difficult to unlock them. In total, there are 23 achievements and most of them require the completion of the main storyline or flawless execution of certain sequences.

These achievements require the completion of specific levels and chapters. This group includes the following achievements: Friends Forever (complete all levels), The Fall of Leviathan (complete The Leviathan), I will always find You (complete Inferior World), Not so happy couple (complete You're Not Alone Anymore). These achievements are the easiest to obtain.

The achievement is very easy to acquire, as early as in the prologue and consists of grabbing the girl by the hand - during the first meeting of the heroes press Z by default for the characters to hold hands. 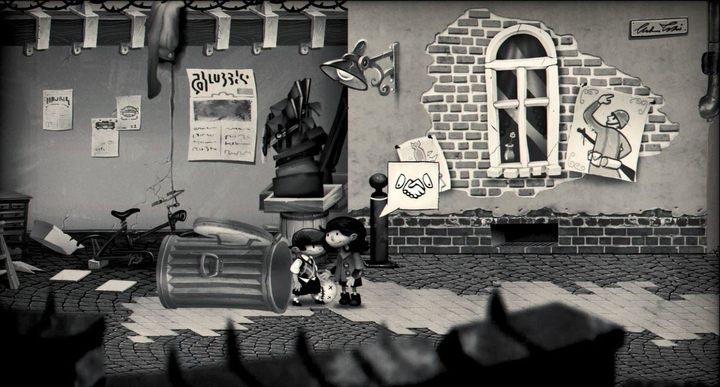 You'll meet the girl in the prologue - the game will tell you how to grab her hand. 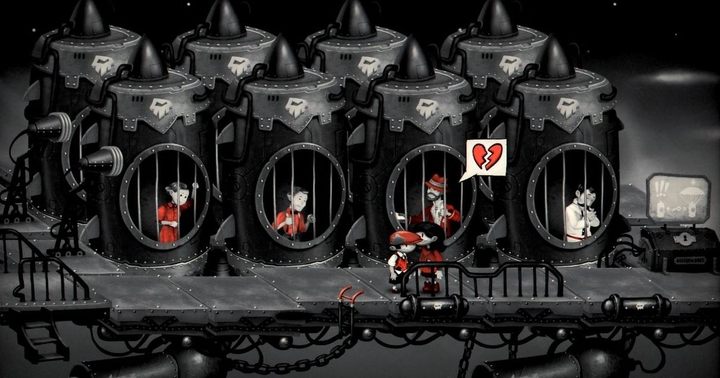 You will encounter the man right after you leave the room with sleeping robots - his beloved one is in the next wagon.

During the "Parents, Bathtub, and Giant Fish" level, visit the same place in the labyrinth three times. The achievement is very easy to unlock, just enter the same pipe bifurcation three times.

During "The Leviathan", discover the truth behind propaganda - this achievement can be unlocked at the beginning of the level, when you approach the second circuit box. Before you start turning the electrical circuits, first unlock the monkey wrench (see picture below, the circuits must supply power to the wrench symbol), take the wrench from the room, return to the previous circuit box and remove the battery. Then return to the room with the second circuit box and the a movie projection. Repeat the interaction on the circuit box.

The sequence below allows you to unlock the achievement - turn the circuits as depicted, get out of the circuit screen and see what has changed in the projected movie. 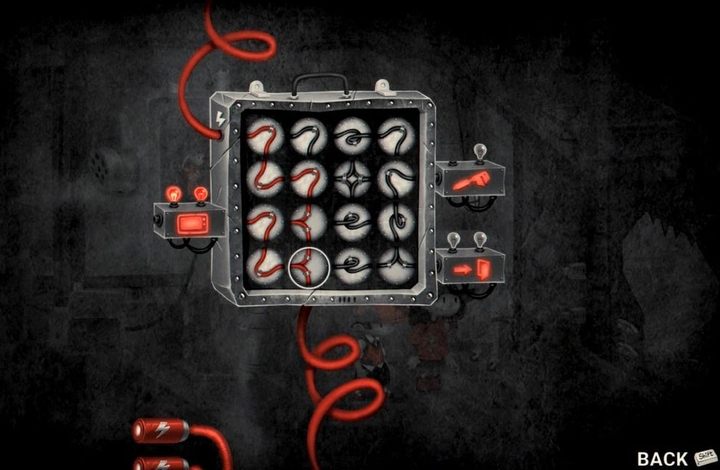 This setting will enable you to unlock the achievement for this level.

During "Inferior World", complete the bicycle stage without making any mistakes. This achievement will require some dexterity in bypassing obstacles, but it is quite easy to unlock. 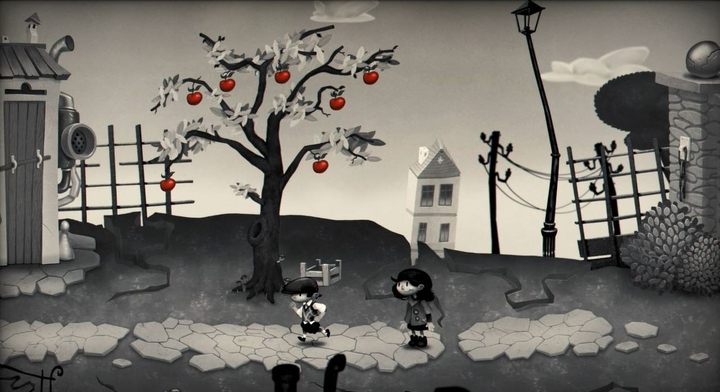 The achievement is quite easy to unlock and it has no time limit. 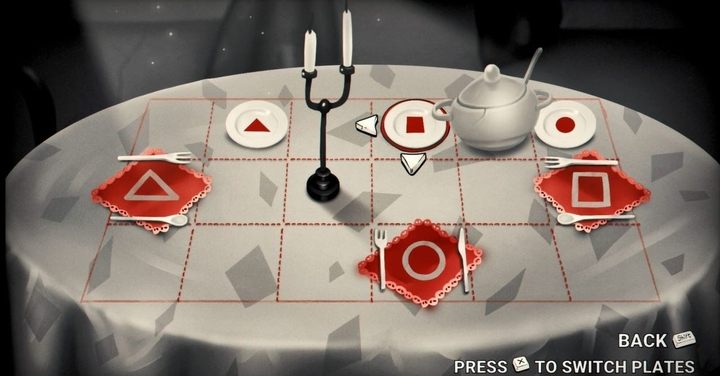 Use other items on the table (e.g. the candlestick) to put the marked plates on their places.

Make no more than 2 mistakes while dancing in "The Thief's Duty" - an easy achievement, unlocked in a rhythm minigame - just hit the appropriate buttons when the notes are in the area marked with vertical bars. 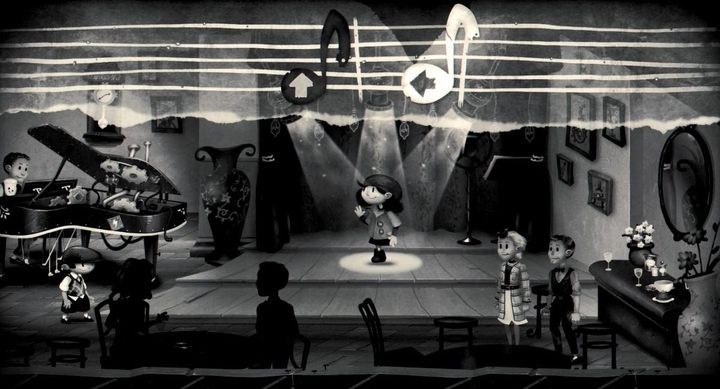 The rhythm minigame requires you to hit the correct keys when the notes between the two vertical bars.

Walk in the park

Complete "Changes, Changes, Changes" without alerting the guards. Quite an easy achievement, unlocked in a sneaking sequence. When getting past the stationary guards, you have to wait until they turn around. 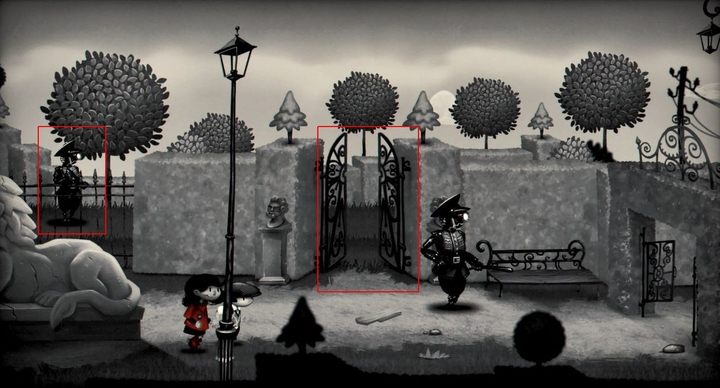 The picture shows the gate you need to use. Note the guard marked in the background - when he's at that spot, you can go past the gate.

Then, go quickly to the right and hide in the old tree trunk. When the robot patrol passes you, go out of hiding and head to the right. You will see the stairs and the robots behind them. Go up the stairs. From a safe distance, shoot the lamp with your slingshot. When the guard turns his back on you, sneak up to him and have the boy steal the lever, then approach the machine behind the robot, install the lever and turn it several times. Have the boy stand in the rays of light, wait for the guard to turn in your direction and use the mirror to blind him. Now the girl can pass safely. Proceed, wait until the guards split up. Sneak past the guards who are arguing with the civilian.

Two rascals in the dark

Set all the posters during "Call to Arts" without being noticed. A rather troublesome achievement unlocked during a stealth sequence, which requires you to simultaneously avoid the guards and set up posters. Use hideouts to avoid foot and flying patrols. When in hiding, you can look around with the help of the movement keys. Be patient and go out only when you're sure you won't come across a patrol. The sequence will be a bit simpler after you finally come across a walking patrol with a dog - there will be no flying patrols from that point on. Look out for the light coming from your opponents' flashlights all the time, so you can react and hide faster.

We don't need no fancy tech

Collect the key by changing the path of the drones no more than 3 times during "The Forest". This achievement requires some dexterity and patience. You will have to sneak under the nose of flying drones. Try to take advantage of the shadow where you need to use the key (at the very bottom in the middle) and use the enemies' long flight paths. Unlocking the middle lane for your opponents to use (to the left, on the middle floor there is a console to unlock) will help you. 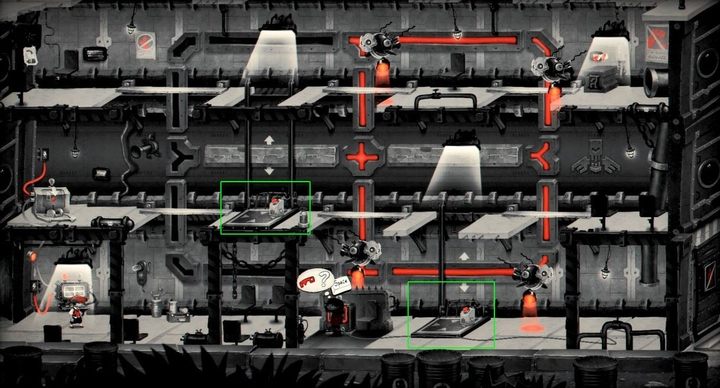 The picture depicts the location of platforms that move between the floors.

Don't be afraid of the dark

Don't let the girl stay alone in the dark during "Interrupted Adventure" - a very simple achievement, just make sure that the boy's lamp is fully charged, and thus provides maximum range of illumination.

During "Call to Acts" prepare the posters without making any mistakes. To start printing the posters, start using the interaction key when the paper is just before the press - the press itself has a delay due to the distance it has to travel from its resting position to the paper surface - compensate for this delay by using the press a bit earlier.

Complete the rotating game in "Parents, Bathtub, and Giant Fish" in less than 40 seconds. This achievement can be troublesome to unlock, especially during the first attempt. Use the picture below to prepare the appropriate tactics to conquer this sequence. 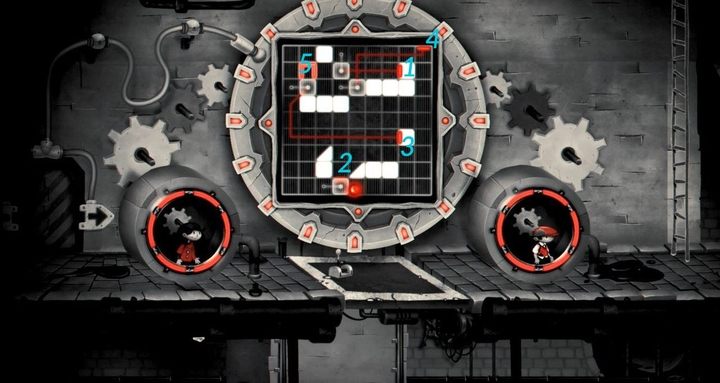 The puzzle requires you to lead the ball to a designated spot, marked with the red square.

Squares with red backlight are switches that move the transparent blocks. You can rotate the entire board to the left or right. The easiest way to start is to navigate to switch 1, then switch 2 and 3. You don't even have to touch the switch number 4. Your goal is the open square at number 5.

Beat the maze in "Parents, Bathtub, and Giant Fish" in less than 40 seconds. This achievement is troublesome to unlock the first time - use the map shown below to make help you get the achievement. 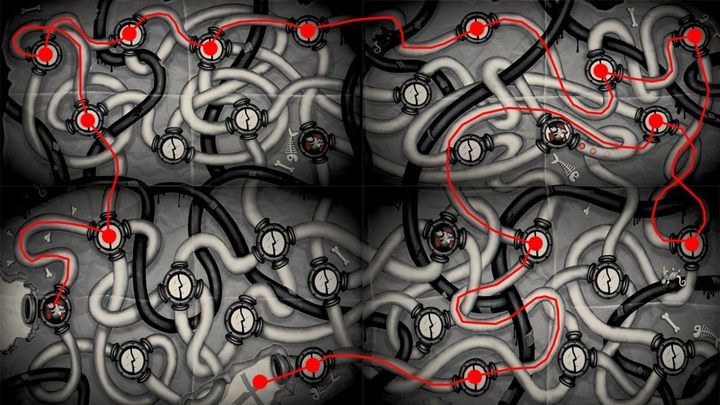 The picture shows the correct path to the objective (the x mark at the end).
See/Add Comments
JOIN FOR UPDATES