The guide for My Memory of Us focuses primarily on the game walkthrough along with solutions to all the puzzles and difficult stages. In addition to the walkthrough, you'll also find the location of additional materials in My Memory of Us. This will allow you to complete the game quickly and easily. You will learn where to find all the memories in the game and find solutions to all the logic puzzles.

The action takes place in a fictional world, which refers to the situation of Poland under German occupation during World War II, especially the situation in Jewish ghettos. My Memory of Us takes place in a fictional city, which was captured by the Evil King and his army of robots. Some districts were separated from the rest by a high wall to contain the "bad elements of the population" painted in red. The plot clearly refers to the tragedy of the civilian population during World War II. The heroes of the game are two children who try to avoid separation and survive the difficult times. The story in the game is nostalgic, sometimes grotesque, sometimes with elements of bittersweet humor. Thanks to the memories you will be able to learn more about the game world. My Memory of Us is an adventure game with arcade and platform game elements, developed by Juggler Games studio. The game was released on PC, PS4, XONE and Nintendo Switch platforms.

The guide for My Memory of Us contains:

What if I reach a dead end?

You won't - the game is designed in such a way that you can't get completely stuck. First of all, most of the things you need to use in some way are highlighted in red, and an interaction button appears when you approach them. Usually it is enough to look around to solve most of the puzzles. Observe your surroundings and speech balloons on the characters - they will often help you find the right way. 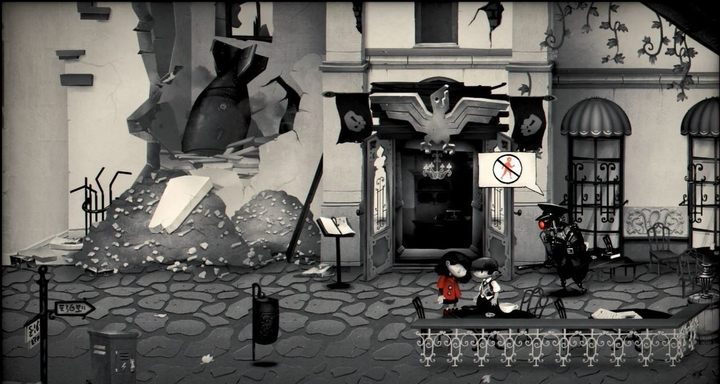 The picture shows how the game informs you where you should go - at this point you can see that the guard will not let the main character pass, because she is marked in red - you should try find another passage or come up with a way to trick the guard.

In My Memory of Us the two protagonists have different active and passive skills. The boy, given his size, is able to squeeze himself through pipes. His thieving skills are often useful, especially when you have to steal an item that your opponent has with him. He is also able to dazzle his opponents with the light reflected by a mirror and illuminate his friend's path with a flashlight, he's also good at sneaking. 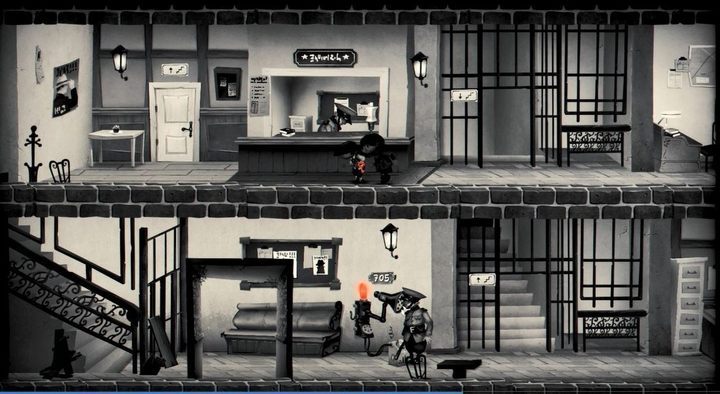 The picture illustrates the hand holding mechanics - allowing the girl to sneak together with the boy.

The girl, as the older one, has more strength, and does most of "heavy lifting" in the game. She has the ability to sprint, which is useful when escaping. Early in the game she gets a slingshot, which allows her to reach the buttons and switches that are normally unavailable. As one of the first to be marked in red, she will have to find a way to sneak past the guards.

The game requires cooperation between the two friends. The mechanic of holding hands allows us to share active skills with our companion, e.g. when we control the boy and hold the girl's hand, it is possible to sneak together. In the opposite situation, the girl may sprint together with the boy.

Will my PC run My Memory of Us?

Considering the fact that the game is 2D/2.5D, it should not cause any problems during the first start. The only problem is the fact that you can't change the graphics settings in game except for Post Processing effects.

The guide was created on the PC version of the game, with the following specs:

The game ran smoothly and without any problems.

Can I play My Memory of Us without Internet access?

Yes - the game was released on the Steam platform, which means that you can simply download it to your HDD and toggle the offline mode. My Memory of Us is a single player game, so you don't have to worry about Internet access.

The game offers an autosave feature, saving the game automatically at in-game checkpoints. The game will inform you by displaying a save icon in the right upper corner of the screen:

The game offers also offers the ability to replay individual chapters - the menu contains a relevant tab, from which you can select the chapter you wish to replay.

PC controls in My Memory of Us

Below you will find the essential controls for My Memory of Us for PC. You will also find the complete list in the Controls section.

Gamepad controls in My Memory of Us

Below you will find the essential gamepad controls for My Memory of Us. You will also find the complete list in the Controls section.

Completing My Memory of Us in 100% is not particularly difficult. None of the achievements is difficult enough to approach them indefinitely. The only achievements that can be troublesome are: We don't need no fancy tech (change the drone path up to 3 times during the "The Forest" level) and Spinner (complete the rotating game in "Parents, Bathtub, and Giant Fish" in less than 40 seconds). These achievements require some thought and strategy from the very beginning of going through these sequences. The rest of the achievements is quite trivial.

About My memory of Us Guide

My Memory of Us Video Game