Just a few days after the game's premiere, Mount and Blade 2 Bannerlord received a number of interesting mods. Fans of the game have quickly begun to modify and enhance all content of the game. On this page of our guide you will find information about best mods to Bannerlord. We have described here mods that remove unnecessary dialogue scenes with bandits, mods that improve trading or allow you to get infinite amounts of gold and reputation.

HOW TO INSTALL MODS TO MOUNT AND BLADE 2 BANNERLORD?

Each interaction with a group of bandits or a squad of another lord is preceded by a dialogue sequence. In some cases this is completely unnecessary - especially when we are attacking bandits and a pointless conversation only wastes our time. Fast Dialogue mod triggers a menu (during each interaction) in which we can start a conversation or start an attack immediately. Thanks to this, the gameplay in Mount and Blade 2 Bannerlord speeds up a bit, and we don't waste time listening to threats from bandits. 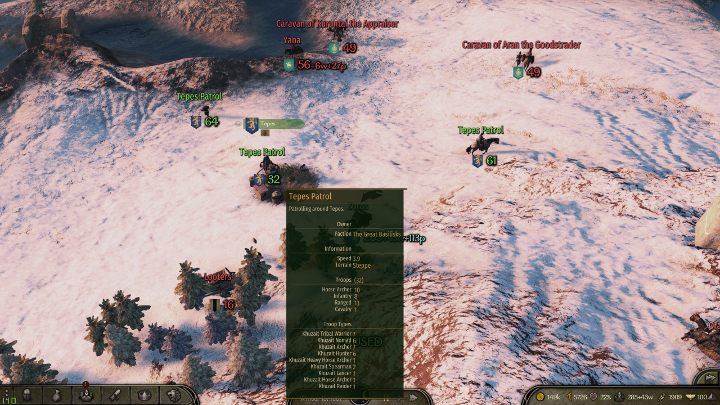 The patrols you have purchased will protect your villages from bandits.

Bandits wandering around our villages can interfere with people's travels between the village and the city - and this has a negative impact on the region's expansion and ongoing trade. Buy Patrols mod adds to the game an opportunity to buy a squad patrolling the paths around player's villages. The option is available in the menu of every village you own - just click on the Hire a patrol button. We get three different sizes of troops at our disposal - the more numerous the patrol, the more gold you have to pay.

Selling all your loot at Mount and Blade 2 Bannerlord by hand (manually) can quickly become tedious and burdensome. This can be fixed by using the Bannerlord AutoTrader mod which enables you to sell all items automatically. In the modification menu, you can set the value of items that should be sold with a single mouse click. In addition, you can also enable automatic purchase of items at predetermined prices, so you won't miss the best deals.

You will be informed of any attack on your lands.

The notifications in Mount and Blade 2 Bannerlord don't work very well. Due to the great amount of information, it is easy to miss the news that a war has just started or an attack has been launched on our land. Fortunately, Sound The Alarm mod fixes this issue. From now on, all important information is displayed in the form of a frame in the middle of the screen. This includes attacks on our castles, villages and cities, as well as declarations of war and alliances between factions.

The console in Mount and Blade 2 Bannerlord is locked by default, but thanks to Developer Console mod it can be quickly enabled. After installing the mod, press the CTRL key and ~ (tilde) key simultaneously during the game - the console will be launched. You can check the list of all commands by entering the help command. You can also use the following commands to get free gold, reputation or influence points:

In place of X, insert the desired value.