The sandbox nature of Mount and Blade 2 Bannerlord can overwhelm novice players - especially those who haven't played Warband or other parts of the series. To make the first few hours with the game more pleasant, we have prepared 10 starting tips. On this page, you will find tips explaining the basic gameplay elements and learn how to play Bannerlord. The basics of combat, recruiting soldiers, managing the party or getting better weapons and soldiers - all these tips can be found below. 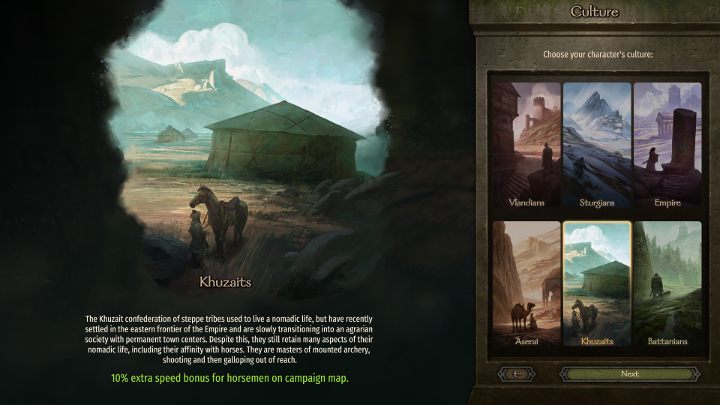 You can't change the culture you have selected during the character creation process.

You have to plan this decision well. The choice of culture cannot be reversed - this is the most important choice when creating a character. We have described them all on the Which one is the best culture? page.

Which culture is the best for beginning players? In our opinion, they are the Sturgians. Inexperienced players should base their army mainly on infantry - and this culture makes their recruitment and upgrading cheaper. Infantry units are the easiest to manage. They don't need proper positioning during battle (unlike ranged units) and they don't require additional costs after advancing to a higher level (creating cavalry requires having horses of a given level in your inventory).

Practice combat in the tutorial 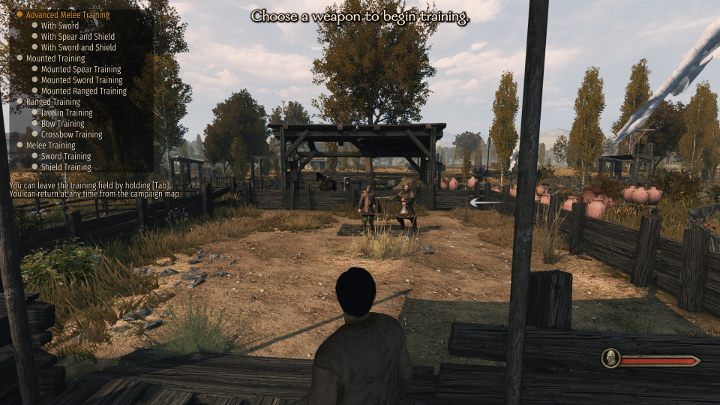 The tutorial will teach you about combat and the weapons - be sure to complete it.

Once you have created your character, you will be able to take part in combat training - do it. This is an excellent opportunity to learn about the combat system in Bannerlord. Here you will learn how to direct your attacks and how to block your opponents' strikes. The tutorial will also teach you all the types of combat - with a sword, a shield, a spear, a bow, a crossbow or on horseback.

Do you want to learn how to fight effectively, siege castles and towns, defend castles or command your units? Check out our chapter dedicated to the combat in Mount and Blade 2 Bannerlord. 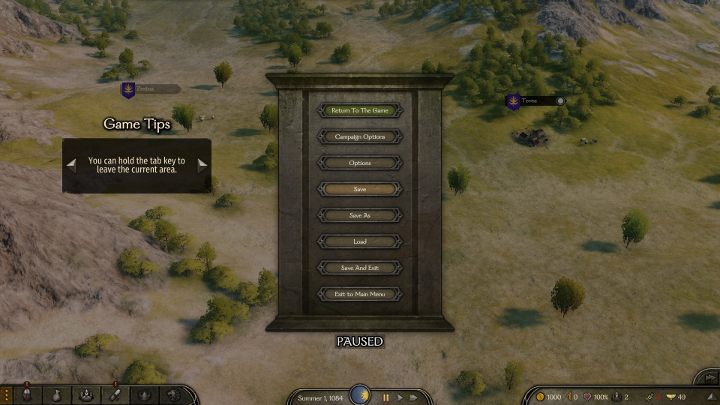 Saving the game frequently will save you some nerves.

After completing your training and started actual gameplay, you need to remember an important rule - save the game as often as possible. Mount and Blade 2 Bannerlord is an unpredictable game. You can be attacked at any moment by a stronger party. You can also fail a mission, which will negatively affect your relationship with the contractor. Because of those examples, you should always have a save file you can go back to. 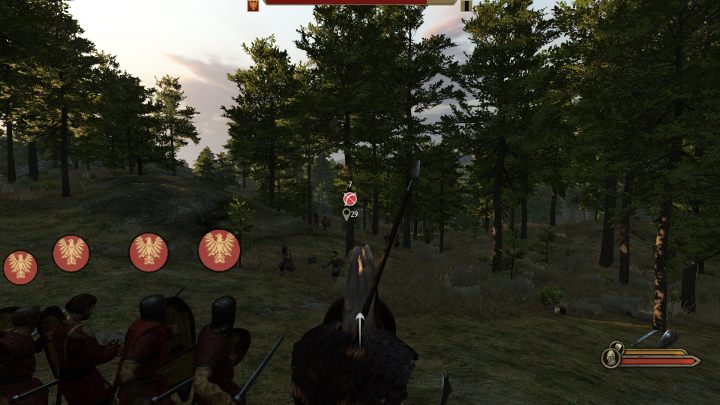 Shields will make it easier for you to block attacks.

They are novice players' best friends. If your character hasn't started the game with a shield in your inventory - go to the nearest city as soon as possible and buy a basic shield for a few dozen pieces of gold. Using a shield will greatly increase your chances of survival on the battlefield. Blocking with a shield is easier than with a weapon. It will also protect you from enemy fire. 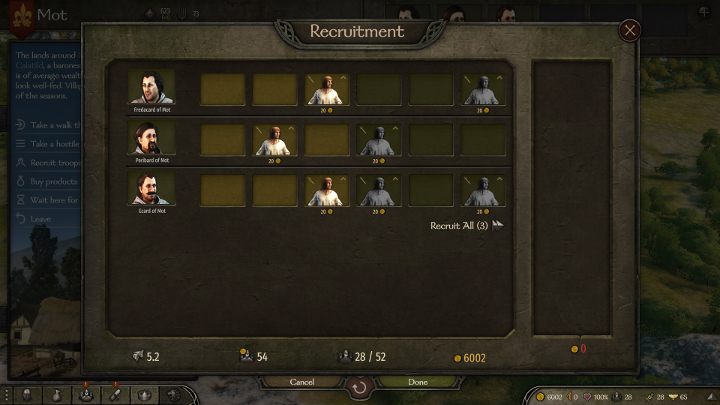 Soldiers can be recruited in towns and villages.

Once you go into campaign map mode, you have to start recruiting soldiers. You will receive 1,000 pieces of gold at the start, which is enough to create a party of about 20 units. With a team like this, you will be able to beat small groups of bandits. To get soldiers, go to a town or village and choose Recruit troops option. In the new window, you will see units who ready to join your party.

You can read more about getting soldiers How to recruit soldiers? page. 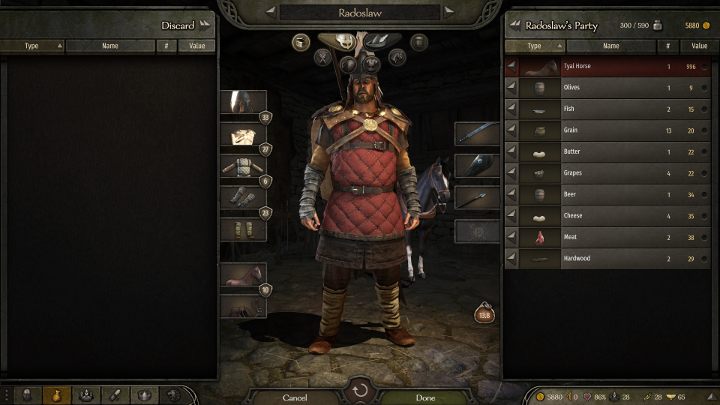 You have to provide food for your units.

When recruiting soldiers, remember that you have to feed your troops. You can buy food from traders or get it from defeated enemies. Without food, the morale of your party will continue to decline - this will lead to desertion. You should also try to provide various types of food. That way the morale will grow. This, in turn, will improve the Steward ability - it is responsible for the maximum number of people in your party.

A large army will make you a powerful lord in Bannerlord. Read How to increase party size? to learn how to make your party bigger. 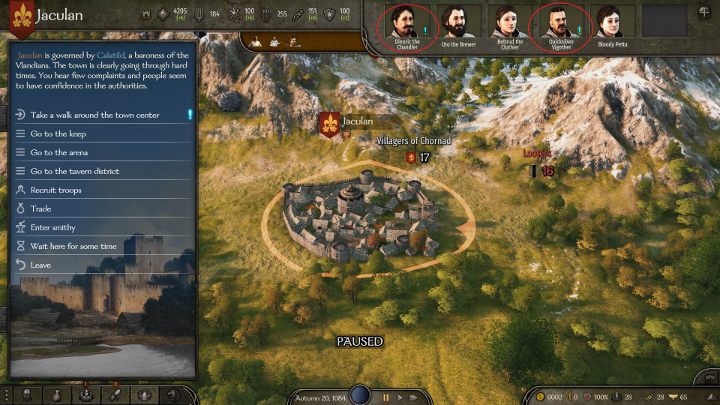 Characters marked with a blue exclamation mark will give you a mission.

Once you have a few dozen soldiers at your disposal, you can start going on missions. Doing them will help you earn a lot of gold and improve your relationship with the quest giver. There are a few types of missions in Mount and Blade 2 Bannerlord. You can, for example, escort a caravan, take out nearby bandits or find a spy. Missions can be started in towns or villages. If a character has a job for you, they will be marked with a blue exclamation mark on their portrait.

One of the mission types involves identifying and killing a spy. This isn't an easy task - we recommend checking out How to find a spy? page. 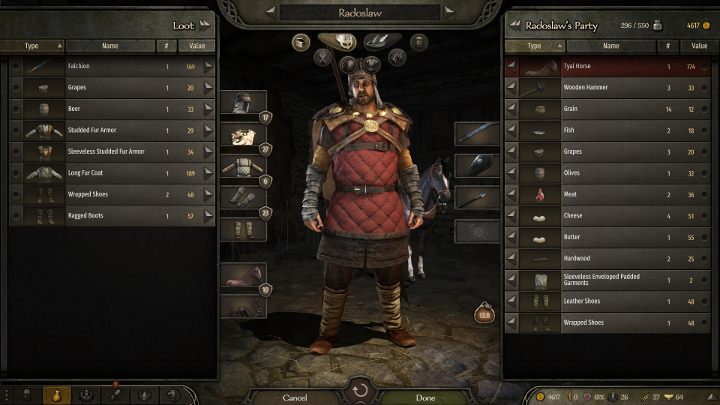 Remember to upgrade your weapons regularly.

You need to upgrade your weapons on a regular basis. You can get good equipment by defeating groups of Sea raiders and Mountain bandits - their weapons will definitely be better than the starting ones. With about twenty basic soldiers, you should easily deal with several groups of these opponents. You can also buy better weapons or armor, but you will need a lot of gold.

There are many ways to obtain gold in Mount and Blade 2 Bannerlord. We described the best of them on How to earn money? page. 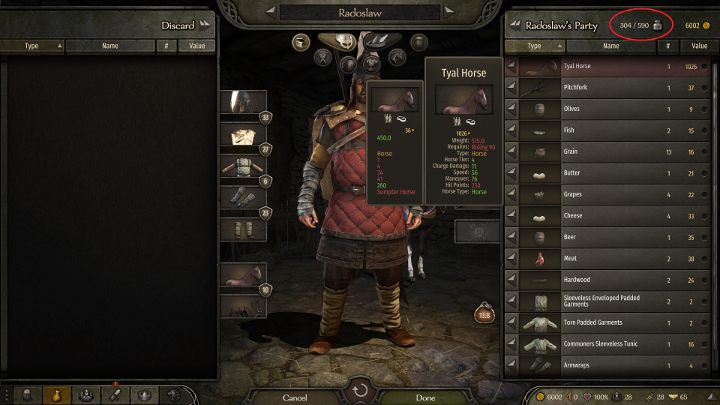 Information about current inventory capacity can be found in the equipment menu.

The capacity of your inventory determines how many items you can carry (each item weights a certain number) - once the maximum load is exceeded, the unit will move much slower on the map. The way to increase capacity, however, is very simple - just add more soldiers to the squad. You can also keep a few horses in your equipment - they also increase the load capacity. 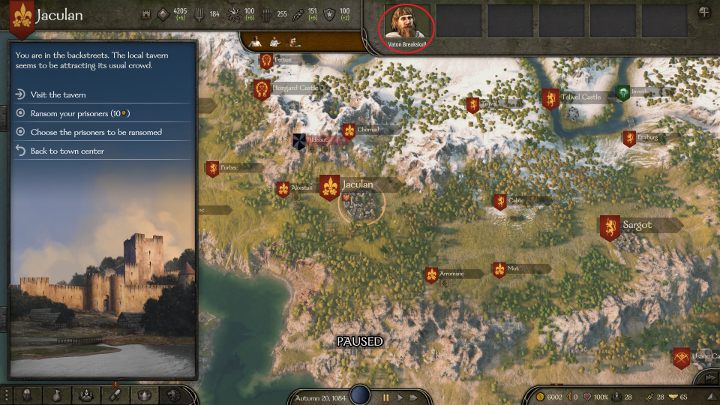 You can meet potential companions in taverns.

Companions in Mount and Blade 2 Bannerlord will help you in many situations. Their skills affect your party - for example, a companion with developed Medicine skill will treat the entire squad. Of course, your companions will also help you in battle. In addition, they can replace you in missions, which will allow you to increase the number of quests performed. It is worth getting at least one companion quickly. Potential companions can be found in town taverns. If you meet one, talk to them - they will join your party after you pay them.

More information about companions can be found on How to recruit companions? page.