In Mount and Blade 2 Bannerlord, money is immensely important. With enough gold, you can recruit new soldiers and upgrade them to higher levels, buy better equipment for your characters, or upgrade your villages and castles. In other words, money will allow you to thrive. This page of the guide lists several ways to make money and answers the question how to make money in Bannerlord. 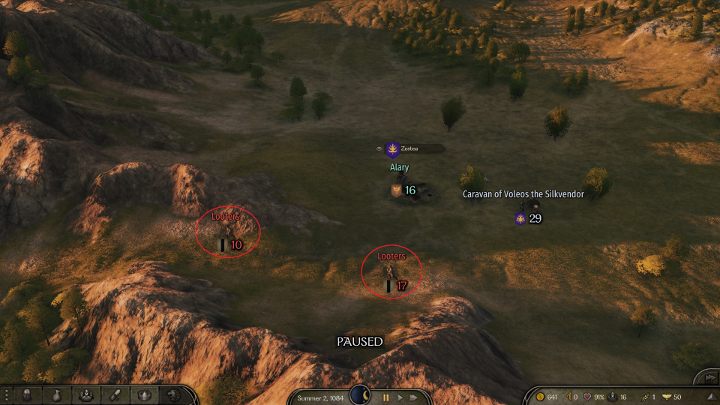 The game's world is full of bandits.

In the world of the game, you will encounter many bandit groups - hunting them is a great way to earn money. If you think that you can easily defeat the nearest group - attack it. Defeated bandits will provide you with loot that you can sell. Along the way, your character and your soldiers will get some experience. 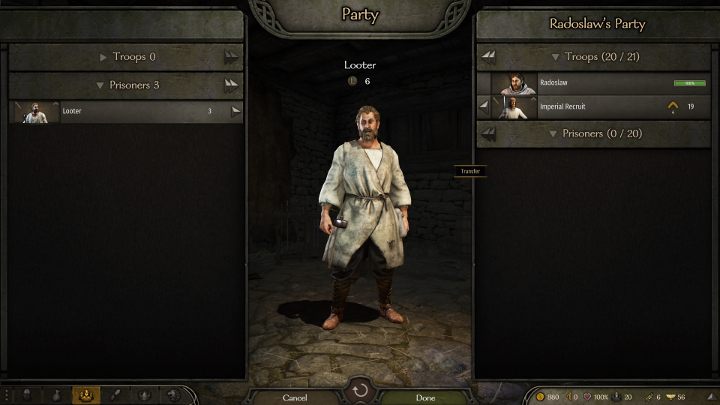 You can sell slaves in any city.

This mechanic combines well with the things described above. After winning a battle, you can get a chance to enslave some opponents - use blunt weapons to increase the chance of stunning enemies. Captured slaves can be sold in a city. The more experienced the slave, the more gold you will receive.

How to sell slaves?

Are you having trouble selling captured enemies? Check out the "Slaves - how to sell and recruit?" page in our guide. 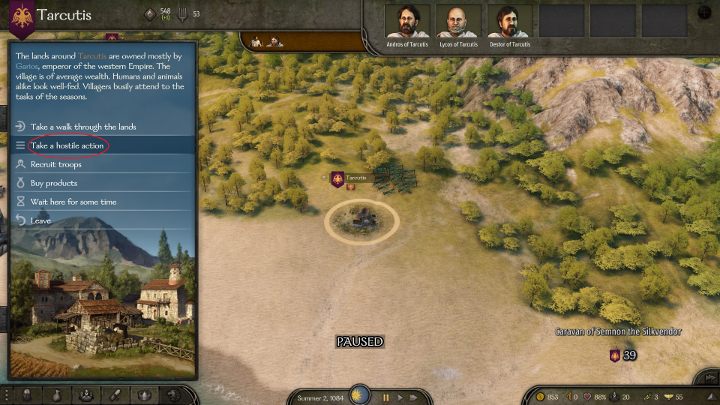 Raiding villages can give you a lot of gold, but this action comes with consequences.

Looting villages can result in various loot - the raided settlements will yield gold and valuable items. Nevertheless, remember that attacking a village owned by a certain lord will deteriorate relations with him, as well as with the settlement. Moreover, there is a high probability that the owner of the settlement will arrive with a sizable party if you start looting his land.

There are two ways to raid. Destroying the entire village will give you the most loot. However, after that, the location will be inaccessible for some time. Intimidating peasants gives you less loot, but the village will continue to function. 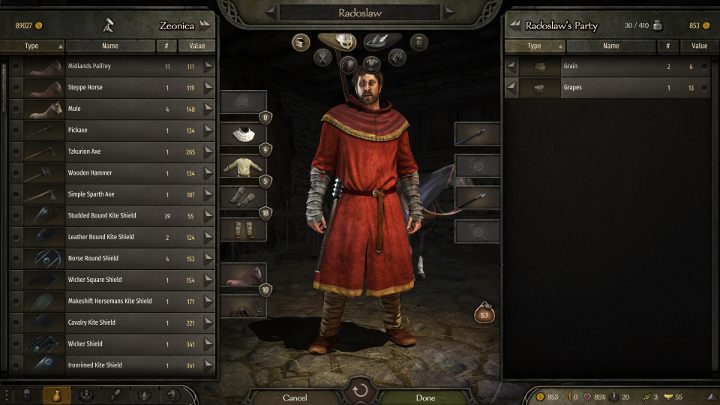 Trade requires you to travel all over the map, but the profits may be worth it.

In Mount and Blade 2, you can successfully apply the well-known trading principle - buy items cheaper, and sell them for higher amounts of money. The game uses a supply and demand system. Some products are less available in one region of the world and more common in another. You can apply this method and, for example, buy wheat in a quiet, thriving area, and sell it in a country beset by war and famine.

The economy system in Mount and Blade 2 Bannerlord has been explained on another page of our guide - "Economics - how to trade?". 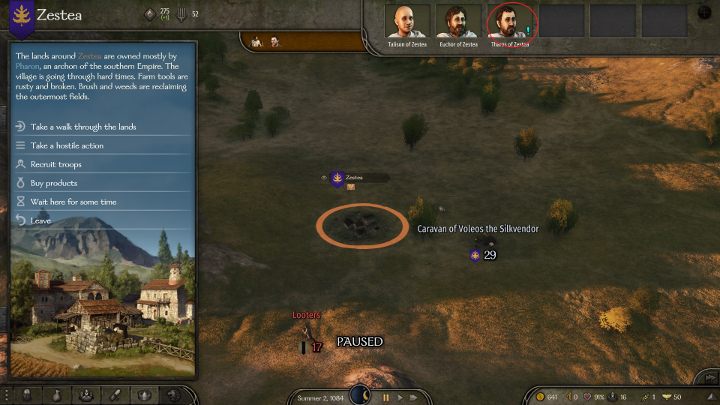 A blue exclamation mark means that someone in a given location has a quest for you.

Completing a mission brings many benefits. You can take on tasks from various characters (lords or leaders of villages) - usually they involve defeating a group of bandits or delivering a letter to a specific location. By fulfilling the needs of the quest giver, you will earn some gold, as well as improve your relationship with them. However, you must remember that a failed mission can lead to a deterioration in the relationship.

Army of Poachers missions are particularly useful. The task is simple and involves getting rid of poachers from the designated village - just go to the location at night and get rid of a dozen enemies. You will get over a dozen Leather items - one piece can be sold for up to 200 gold pieces. In addition, you will often receive more than 1000 pieces of gold just for completing the task.

Arena fights and participating in tournaments 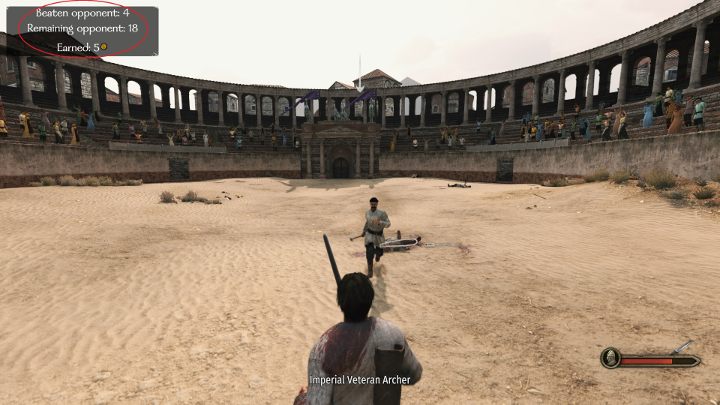 The number of defeated opponents and received gold is displayed in the top left corner of the screen.

A single fight in the arena won't provide you much gold - prizes range from a few to a few dozen gold coins. However, this way of earning gold has a big advantage - you have unlimited access to an arena. Besides, fighting in the arena has no risks - even if you get defeated, you lose nothing, and your health is instantly regenerated. This is a great way to earn some gold in a safe way and practice combat.

Tournaments are occasionally held in random cities. They operate slightly differently from arenas. These are one-time events - no matter if you win or lose, you have to find another tournament or wait for another one to start in the city, you can't reenter. Winning in a tournament provides a lot more benefits than fighting in the arena. First of all, you will receive a reward in form of a valuable item or mount. You can also bet on yourself to win each round - if you do win, you will earn extra gold from the bets.

HOW TO ENTER THE ARENA OR PARTICIPATE IN A TOURNAMENT? 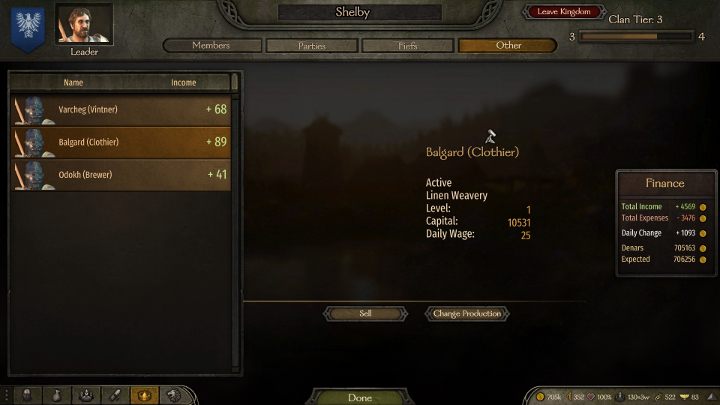 Workshop will provide you a daily income of gold.

The Workshop is a special building that produces and sells specific goods - beer, wool, wood or iron. Each Workshop which you have bought can generate a daily income - usually from several dozen to about 200 gold pieces. How much a particular Workshop can earn depends on the city it's located and the current situation of the area. To buy a Workshop just travel to any city and find a character named Shop Worker (look for Brewery or Pottery Shop in the city) - it will cost you about 13 thousand gold pieces.

A detailed guide on how to buy a Workshop, as well as information on which Workshop is best in Mount and Blade 2 Bannerlord can be found on another page of our guide - "Workshop - how to buy?". 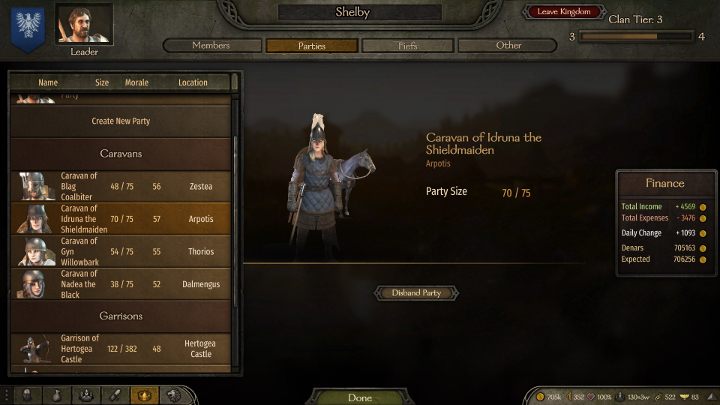 You must assign your companion to operate the caravan.

Similarly to the Workshop, the caravan provides daily income - even in the form of 1000 gold pieces. However, this has a number of disadvantages. You have to assign a companion to each caravan and also pay a daily security guard salary - this makes the caravan loss-making instead of earning money in the beginning. Besides, the caravan may be attacked by hostile lords. You can buy a caravan in any city by visiting a Merchant.

EVERYTHING YOU NEED TO KNOW ABOUT CARAVANS

The topic of caravans in Mount and Blade 2 Bannerlord has been described in more detail on another page of our guide - "Caravan - how to create it?".