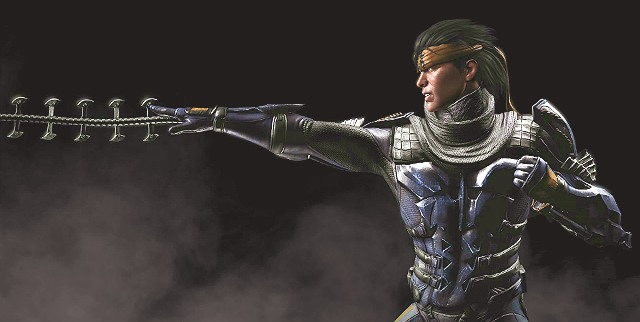 Takeda is a warrior trained by Scorpion, so some of his moves may seem familiar. He can very well keep the opponent at a distance and has a repertoire of interesting moves, with his lightsabers (Ronin version)!

With this move, you can jump over the projectile and deal damage to the opponent. The EX version drives the opponent into the ground, launches them into the air, thanks to which you can start a juggle.

Takeda lands a chain of quick punches. In the EX version, he deals more damage and the chain cannot be interrupted by the opponent. This can be used as a combo finisher.

Shirai Ryu: He can now use projectiles. Drags the opponent like Scorpion (both on the ground and in the air). Teleports with a blow like Scorpion (can be used in mid-air). Takeda can also curl up and dash towards the opponent (overhead). (B21 xx EX version of Kunai, B2 xx teleport, F21 xx spear)

Lasher: It is more of zoning, because Takeda's blades extend to a very long distance. Down, diagonal, square (it is impossible to jump onto it or you bounce off) (low damage). House kick that knocks the opponent into the air and can be used as a combo opener (mid). Sweep over a long distance.

Ronin: Takeda has two lightsabers that he can use for quick attacks of long range. The jump into the air looks just like shoryuryp in street fighter (in the EX version, there are two jumps). Takeda can also throw a saber to the opponent's feet and either summon it back or perform an upward slash, which launches the opponent into the air. You need to remember that after you throw the weapon, you cannot perform saber moves, until it returns to your hand.

Kill the opponent with a regular throw and press any of the punches, 4 times, during the animation.