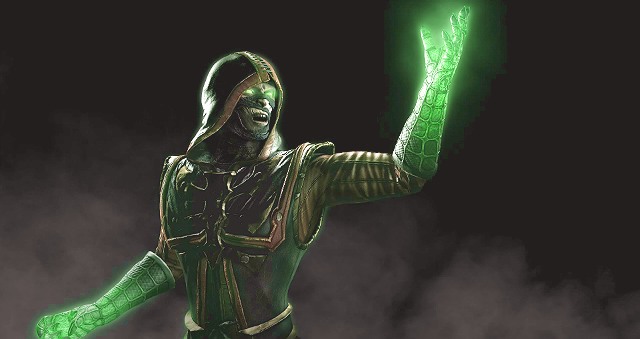 Ermac accumulates the souls of the dead, which is why he speaks of himself in plural. It is a very slow character that focuses on keeping the opponent at a range, holding his ground and countering their special attacks. The teleport makes up, a bit, for his lack of mobility.

A short-range projectile. You can fire it both forward and up into the air, thanks to which it is a good anti-air attack. Also, it can be used in mid-air. In the EX version, it cannot be interrupted and, apart from that, it knocks the opponent far away of Ermac. If you jump, you can also use this attack as an overhead, but you need to fire it right before you land.

Probably Ermac's best move. He lifts the opponent with the power of his will and holds them in the air, thanks to which he can start a juggle. It is perfect for keeping the opponent at a distance.

Ermac can now teleport to the other side of the screen, behind the opponent's back and land an attack. In the EX version, he additionally launches the opponent into the air, thanks to which you can start a juggle.

Mystic: Increased combat capabilities. Ermac can use his power to push the opponent away (it hits Mid and can be blocked). You can use this move to push the opponent, even if they are in mid- air. The condition is that you manage to catch their feet with the skill. After using his power, Ermac can also catch the opponent at a distance, turn them upside down and hold them in the capture state, for a moment, thanks to which you will have it easier with starting a combo. What is even more, he can flat himself and attack in mid-air (with a low blow). Another Ermac's attack is teleporting with a strike.

Master of Souls: In this variant, Ermac can throw a spirit projectile - Down, back + 3. Around Ermac, there appear three glowing spirits and, if you use them against the opponent, they disappear, but they entangle the opponent, thanks to which he will remain motionless. It is worth noting here that this attack can re-stand the opponent . Also, you can throw projectiles in mid-air. Ermac can also disappear from the opponent's sight, for a moment. In this state, he does not take any damage, because he is, simply, not there. The opponent can easily cross the spot, in which he disappeared, fire projectiles and hit. Until Ermac reappears, nothing happens. Also, you can disappear in mid-air.

Spectral: The greatest difference, when compared to the rest of the variants of this character is that as Spectral Ermac, you can fly. What is more, in mid flight, you can execute your attacks. The most mobile version of this character. Additionally, he can fly a la Superman, i.e. he charges across the entire arena, with his fist extended. What is interesting, in this variant, you can fire no projectiles.

Brutality<br>Perform 10 special abilities, during the entire match and kill the opponent with Air Force Port (v,<+4+B)