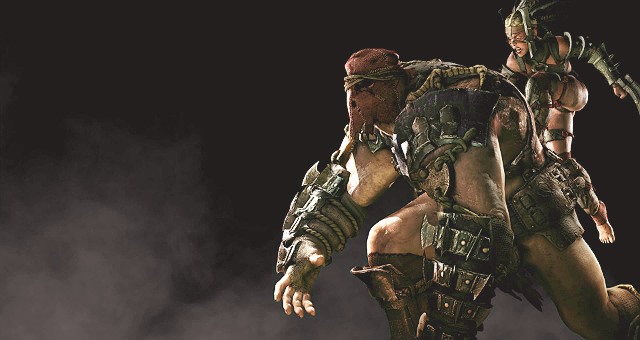 This character is specific in that there are two of him, instead of one. Ferra is the small girl on the back of the beefcake - Torr. The big guy can execute a series of moves, where he hurls the girl, or uses her to hit the opponent. A strange tactic, yet effective.

Torr hurls Ferra, who rolls across the entire arena and connects low. You can use this attack to end a combo. You need to keep in mind that, if you throw Ferra, it takes some time for her to mount Tor and, over that time, you will be able to use their combined attacks.

A combination that initiates a mini-combo, because Torr first slams the opponent overhead, and then charges at them and pushes towards the other end of the arena. As for the EX version, it can be used in two ways. You can enhance the first part, i.e. the overhead attack, which cannot be interrupted with a regular attack, or enhance the charge, to deal additional damage.

A grab, which can be used even on a blocking opponent. It is impossible to continue combo after this move, but the grab itself has quite a range, so it can surprise the opponent.

Ruthless: In this variant, you receive an overhead attack, which can be launched at three different distances, even across the entire arena! Neutral jump, with the attack has an immense range, thanks to which you can start a juggle while standing within a considerable distance of the opponent. Ferra/Torr may also deal damage at the cost of a small amount of their own health (v,v+2). This buff can be stacked 3 times so, you lose 15% of your health, but instead of an attack that used to deal, e.g. 7% damage, you now deal more than 15% so, this provides you with a decent bonus. Additionally, if you use it for a combo, it turns out that you deal decent damage. A long range grab.

Vicious: This variant is not too much different from the previous one. In fact, you receive two new moves. The first one is the Ferra toss towards the opponent, who then starts to stab them with blades. What is even more, if the opponent throws a projectile at the moment, Ferra ignores it and reaches her target anyway! The second difference is that the range of the grab is limited and it is much slower. What is even more, the grab is now interactive so, it requires you to choose attacks.

Lackey: This variant is the greatest alteration - Torr fights without Ferra on the back. She is now staying around and watching the fight. Due to this, Torr's range is not that long, anymore. The range of the grab is long again and it harmonizes well with low punch (v+2) as an opener + grab. Torr also gains a charge (<,>+4), which knocks the opponent down. The interesting thing is that you can neutralize the opponent's projectiles with the charge, and push towards the opponent. Another special move is leg sweep - Torr curls up and rolls towards the opponent. What is interesting, this move hits Mid instead of Low, contrary to what may be apparent. The range of the EX version is much longer. The last special move is shyrjuken! Torr jumps into the air, with his fist extended, and hits the opponent. It is perfect as an anti-air move. What is more, the EX version additionally provides ground bounce thanks to which you can continue into a combo.

Brutality<br><br>During the fight, perform run, at least 3 times, kill the opponent with the charge (<,>+3) and hold down > during the animation.