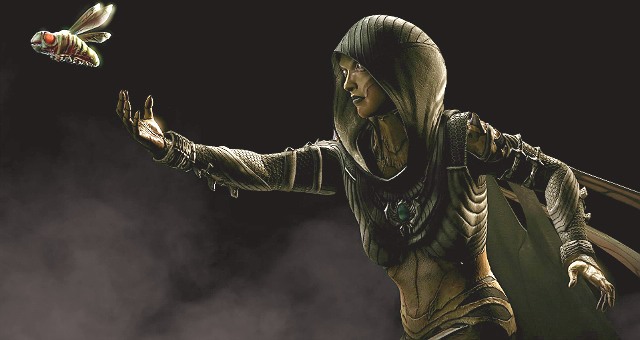 A specific character with long ranged attacks, due to her additional limbs springing out of her body, while landing strikes. D'Vorah is very versatile, when it comes to keeping the opponent in the air, with juggling. Also, she can deal some damage to the downed opponent.

D'Vorah releases mucus from her palms, which soaks into the ground and resurfaces in front of the opponent. This makes the opponent use a crouching block, which you can use for an overhead attack. It is a good idea to use this attack when the opponent is dropping to the ground, which exerts additional pressure. Spawning Pool is present in th emajority of combos of this character.

D'Vorah may perform an air throw, which is perfect for ending the (<-+1,2) combo. You can throw the opponent to the right or to the left, depending on which direction you press, after you grab the opponent.

D'Vorah uses her additional limbs to attack the opponent quickly. It is a nice Finisher for combos and, additionally, it tosses the opponent to the ground, thanks to which you can end it with Spawning Pool and make the opponent block.

Swarm Queen: D'Vorah can use the help of wasps or bugs. Wasps stun the opponent for a moment, and bugs stun for much longer, thanks to which you can easily start a combo. In this version, Spawning Pool has been replaced with Vortex Swarm, which adds capture state and keeps the opponent in the air, which is a nice combo opener, or may be used to connect one combo with another.

Brood Mother: D'Vorah may use projectiles, or bugs sent towards the opponent. The EX version releases two bugs. Also, D'Vorah may throw a bug onto the ground (Krawler), which head forward and deals damage low. It is perfect for attacking opponent that is dropping onto the ground, or as a combo opener.

Venomous: In this version, there is an additional function to D'Vorah's attacks - poisoning. Thanks to this, the opponent takes additional damage over time, after they are hit with one of the limbs. What is even more, the poisoning effect can be stacked! The more blows you land, the higher the dmg over time. The "bug projectile" is replaced with a spray that deals constant damage and stuns the opponent, temporarily. It is worth noting here that, in the spray's EX version, if the opponent takes it all on the block, you receive back 3 of the EX meter! There also is the re-stand function of the spray. Another important point is that D'Vorah can launch X-Ray in mid-air.

During the fight, start a 4 strike combo, ended with Backward Air Throw (in mid-air (v+T,<).