The following page of the guide to Monster Hunter Rise explains what Rampage is. We included the most important information about defending the Stronghold of the village and described all Hunting Installations and types of monsters. We suggest how to level up the Stronghold quickly and to prepare to fight the hordes. At the end of the page, you will find a handful of tips on how to complete the Rampage mission.

Rampage is the kind of mission that will be unlocked playing the main storyline. These missions involve defending Kamura village from waves of monsters. If the gate blocking the entrance to the village is destroyed, the mission will fail.

Rampage Missions are a great place to collect materials from monsters, receive rewards, and increase the Hunter Rank, especially if you complete the task with the rank S. To find out how to get the highest rating defending the Stranhold, see a separate page of the guide: Rampage S rank - how to earn? 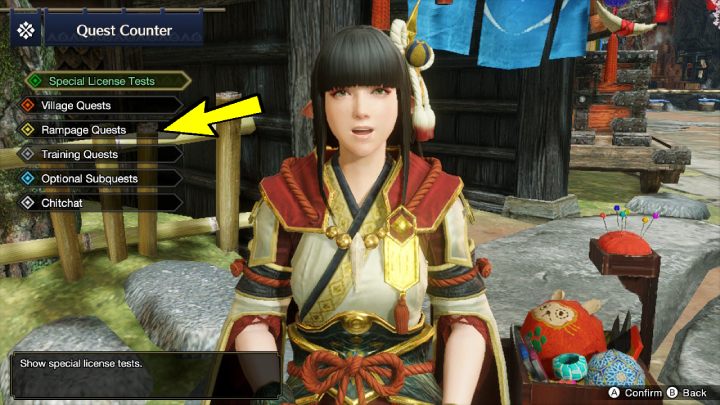 Here are the most important information about Rampage: 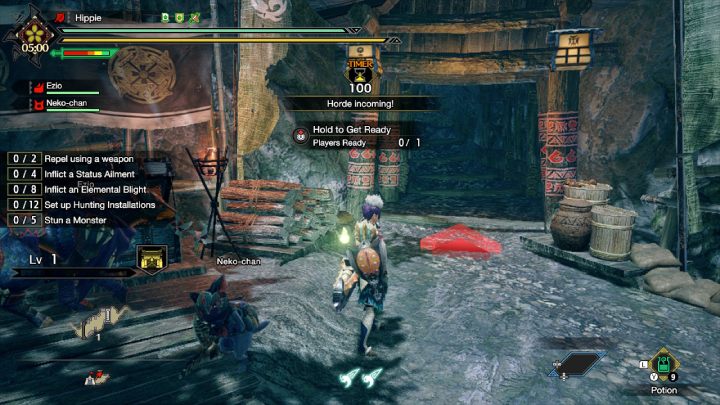 Each Rampage task will begin in the Stronghold base, which is a similar place to hunting camps. There, you will find a box from the guild, in which you will be able to create the necessary items or potions and change your equipment.

After the mission starts, you will have 2 minutes to prepare before the first wave of monsters appears.

In the base will appear Prism Spiritbirds, which will increase your stats until you complete the quest. Make sure you interact with them before you go into the battle ground. 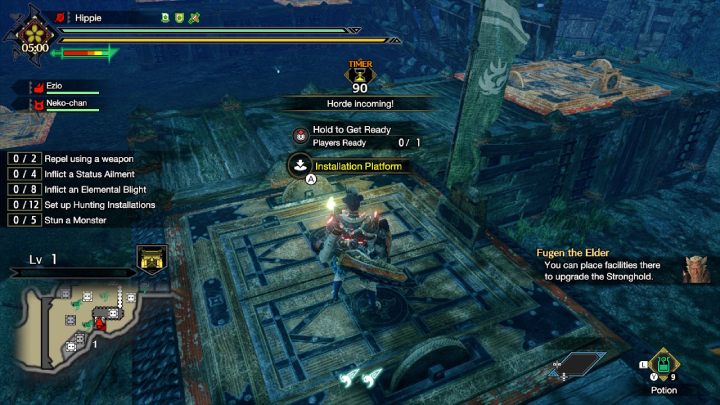 On the Stronghold ground, there are many platforms on which you can place large Hunting Installations. These are special machines available only during the Rampage. You can find the locations of these platforms on the minimap.

Go to the platform and press A to select the type of installation you want to place. 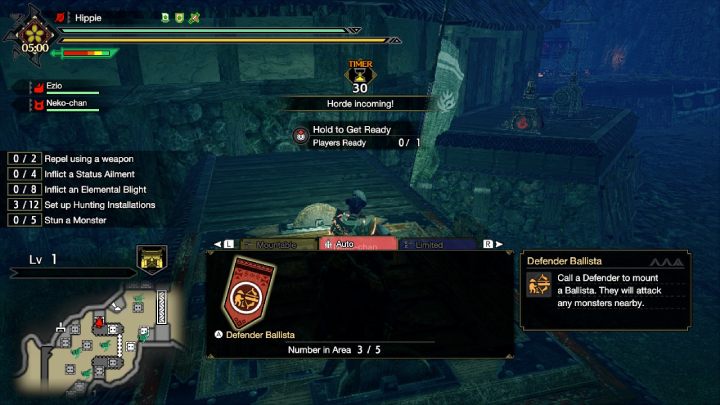 There are 3 types of installations that you can put on platforms:

As the Stronghold level increases, new installations will be unlocked. 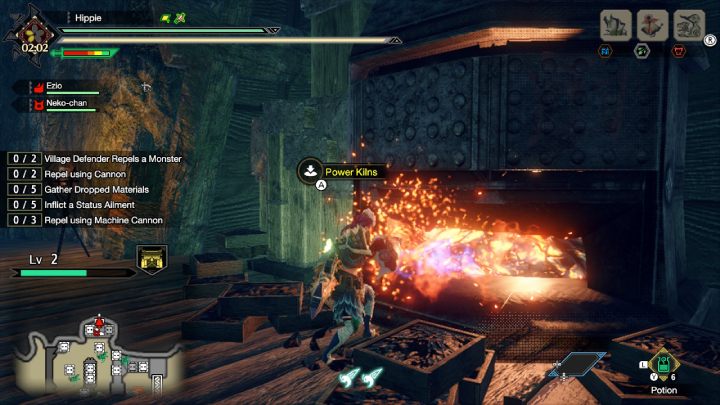 In addition to the machines mentioned above, depending on the level of the Stronghold, you can find heavy hunting installation on its grounds:

Repelling hordes of monsters and performing side quests during the Rampage provides experience points for your Stronghold. Advancing to the next Stronghold levels unlocks new Hunting Installation, increases the amount of ammunition, and strengthens and increases the duration of the counterattack signal. 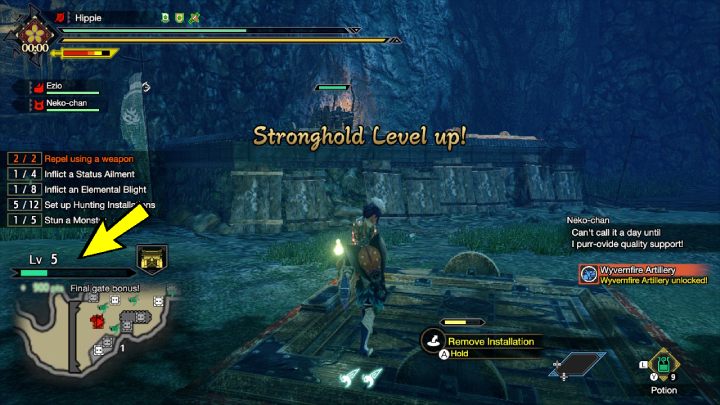 You will find the level of your Stronghold on the left side of the screen, above the minimap. The Stronghold level resets after each completed Rampage mission. 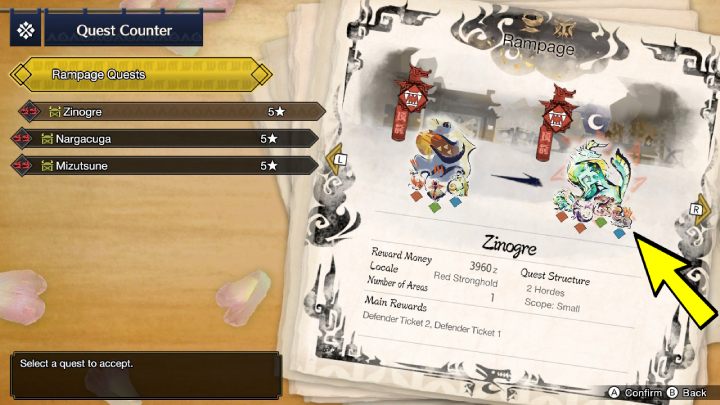 Hordes of monsters consist of several beasts and the main threat that leads them. In Rampage, you can fight against the maximum of 3 hordes. You will find the exact number and types of monsters before accepting the mission and in the mission description.

Monsters from hordes are classified according to the following types. These icons will be located above the heads of the beast. 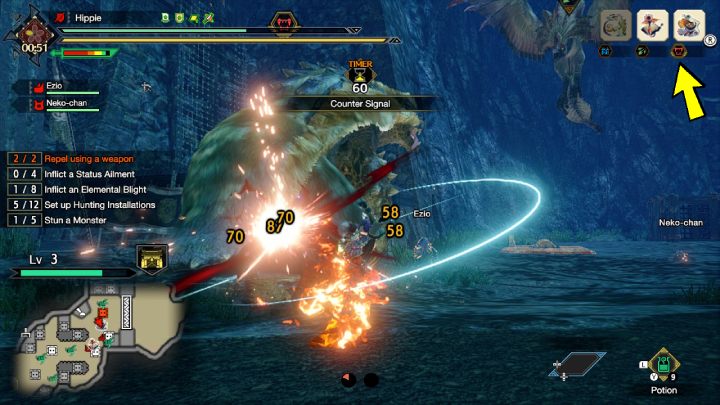 The main threats are easy to identify. These monsters are much larger and stronger than the rest of the beasts, and their icon has a gold border. Defeating them will provide a lot of Stronghold experience points and raise the final rating of the Rampage. 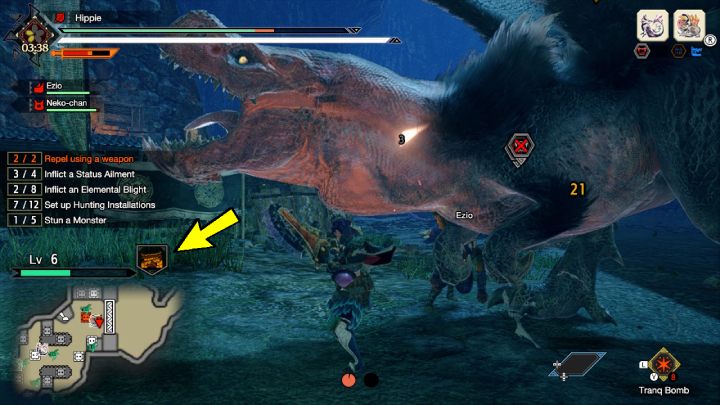 The Rampage mission can take place in one or more areas, depending on its difficulty. You will have to defend the gates blocking the entrance to the next area and the most important gate to the village.

The main gate loses its durability due to monster attacks. Its status is shown on the screen as an icon next to the Stronghold level. 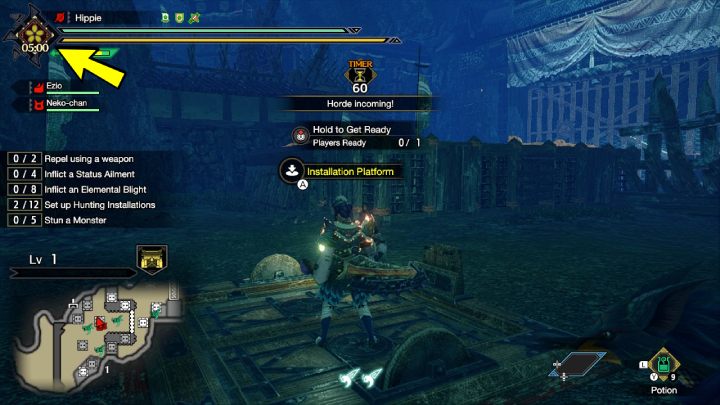 The upper left corner of the screen has a clock showing the time left to maintain the main gate. Between each wave of monsters, you will get a short break. Use this time to repair and prepare new hunting installations, sharpen weapons, and, if necessary, change your equipment in the camp.

If you have completed all preparation and still have time left before the horde appears, hold down the right analog to begin the siege.