This page of the guide to Minecraft Dungeons has information about the game's world - its construction, division into locations, and exploration. You will also learn about the environments and their impact on gameplay.

The world in the game was divided into a number of smaller locations. At the beginning of the game, you only have access to one of them. However, by achieving specific goals, you will unlock the next levels. The developers did their best to make the map as diverse as possible - during the adventure you will visit forests, deserts, and mountain peaks. Each of these places has unique opponents.

Your camp acts as a main base. There you can practice combat or buy and sell equipment. Initially, the village is small. But as the game progresses, you will develop it. This is because you release its villagers during various missions. 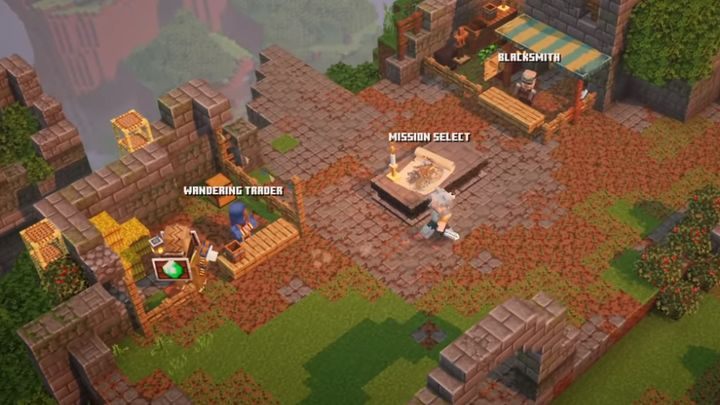 You switch between locations using the world map available in the camp. When you point a mission, you will see a panel containing the basic information about a given quest. You will learn from it about your current level and the recommended one. You will also find information about the number of items you can find during it and the current difficulty level.

The locations related to missions have limited space. The levels vary in size. You can explore large open spaces or claustrophobic dungeons. To move around them smoothly, the developers have implemented a mini-map - your current position will be marked on it. A thorough exploration of the level will allow you to get new equipment.

Each mission available in the game can be replayed. By going through them again, you will be able to get better equipment. However, each playthrough of a given mission increases its difficulty level.