This guide to Minecraft Dungeons contains a complete set of information about this action spin-off of the popular Minecraft.

In our guide we have prepared a section which provides answers to all troubling questions. In the FAQ, you can find information about saves, crafting, whether you can return to previous levels, difficulty levels or character-related aspects like how to switch a character.

Also, we have prepared pages with all information regarding the character development. We have described weapons and ways of character development. In our guide you can also learn more about the combat system. Our starting tips will make it easier for you during the first hours of the gameplay. Additionally, we have created an appendix which contains information about in-game controls, keybinds and system requirements.

Because the map in Minecraft Dungeons is quite specific, we have dedicated a few pages to comprehensively explain this topic. Our guide provides information whether your character is visible on the map, how to discover new areas and how to travel through the in-game world. In our guide there is also a special section dedicated to bosses. You can quickly learn more about boss attacks. Also, we explain what are the most effective ways to defeat these horrifying foes.

We have created an extensive section about chests and secrets available in Minecraft Dungeons. By reading these pages you will be able to quickly and easily discover all the secrets that can be found in the game.

Minecraft Dungeons in a nutshell

Minecraft Dungeons is an action-adventure game developed by Mojang AB and a spin-off of the cult Minecraft.

The title is set in a fantasy land. During the game, you must face a villain known as Arch-Illager and his army of monsters who want to destroy your village. To thwart his plans, you must go on a dangerous expedition.

The gameplay in Minecraft Dungeons focuses on the exploration of procedurally generated locations as well as battles with opponents. The combat system is arcade, making the game accessible for beginners.

On what platforms is Minecraft Dungeons available?

Minecraft Dungeons will be released on PC and Xbox One, PlayStation 4 and Nintendo Switch. The release date for all the platforms is the same.

Minecraft Dungeons is not a free-to-play title, you have to buy it. The game will also be available to the Xbox Game Pass subscribers from the day of its release.

Does Minecraft Dungeons have online mode?

Yes. Minecraft Dungeons has a solo mode. However, the title also offers a co-op mode for up to four people.

Microtransactions - does Minecraft Dungeons have any?

Minecraft Dungeons doesn't have any microtransactions or lootboxes.

How long is Minecraft Dungeons?

It's hard to estimate the overall length of Minecraft Dungeons. It depends on your gameplay style and how much time you devote to exploration. If you just want to run-through all levels that the developers have prepared, then the game will take from a few to several hours. However, if you decide to collect chests, discover secrets, test new difficulty levels and embark on a quest to obtain new equipment, then you may play the game for dozens of ours or even longer. 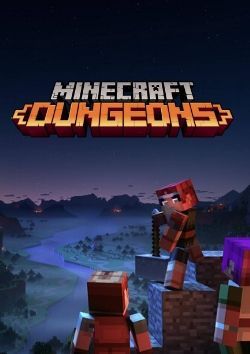 Minecraft: Dungeons is a fantasy action adventure game. This is a spin-off of the extremely popular Minecraft; both productions were developed by Mojang AB.

The action of the game takes place in classic fantasy land, reminiscent of the Middle Ages, but enriched with strong magic elements. The plot revolves around a villain known as Arch-Illager, the leader of monster armies. Players take on the role of brave adventurers and their task is to save the village that has become this villain's target.

Minecraft: Dungeons is a classic action adventure game. We explore dungeons, swamps, and canyons full of dangers. We must avoid pitfalls and fight monsters using an arcade combat system.

We do practically the same as in dungeon crawler RPGs, but the mechanics remain faithful to the solutions of action adventure games. That's why there's no traditional system for improving hero statistics. Instead, character development is done by finding better and better equipment, mainly weapons.

Minecraft: Dungeons has been developed to provide good gameplay for both a single player and a cooperative mode for up to four people.

The setting of the game was made in a characteristic style modelled on the original Minecraft, where both the elements of the environment, as well as characters and monsters have the form of angular solids, which makes the whole look like it was built with blocks.

Lean years continue, but we will get a few new games in May: the remaster of Saints Row: The Third, Xenoblade Chronicles, Maneater, where we play a shark, should all keep us entertained. In May, we'll also play the first, mysterious game from Amazon.

In April, we will run away from the terrifying Nemesis in the Resident Evil 3 Remaster, see if Square has successfully recreated the magic of Final Fantasy 7 and whether Fallout 76 can redeem itself yet. Stay at home and play these!