What hardware and controller should I choose to fly a plane in Flight Simulator?

From the very first moments of controlling a Cessna or Robin you will quickly find out that controlling an aircraft by using the numeric keyboard is a rather bad idea. The plane reacts very violently and is difficult to control. Making small, precise adjustments of the flight trajectory really takes a lot of patience and effort. Using keyboard as the controlling device only make sense if we want to benchmark the game or do some sightseeing in order to test our hardware - it has nothing to do with the joy of flying.

You should definitely equip yourself with some kind of analog controller that allows you to assign axes to control the ailerons, wing flaps and the height rudder of the airplane, not the buttons. Smooth axis tilting and the ability to keep these tilts at a desired level is crucial not only to get a realistic flying experience, but to make the steering much easier and more enjoyable compared to the keyboard itself. There is quite a range of equipment to choose from - from gamepads, through joysticks, HOTAS sets, to flight sticks, separately connected pedals and head tracking devices. What are the pros and cons of different solutions?

The simplest solution is a simple gamepad used for other games, which allows you to control the plane with the left analog knob and the triggers to operate the rudder of the direction. However, if you use a gaming controller you won't be able to make any sort of special controller configuration in the form of reduced axis sensitivity, which has been described in detail in the Controls section. All because the tilt of the gamepad knobs is very small and it is difficult to get the right precision in this area.

The advantage of the gaming controller is primarily that it has analog axes and we probably already have it at home. It's a good choice to start with when we're just wanting to check whether flight simulators may suck us in. However, remember that controlling the aircraft forces you to use a lot of different buttons and in addition to gaming controller you still need to operate the mouse efficiently and support yourself with the keyboard. 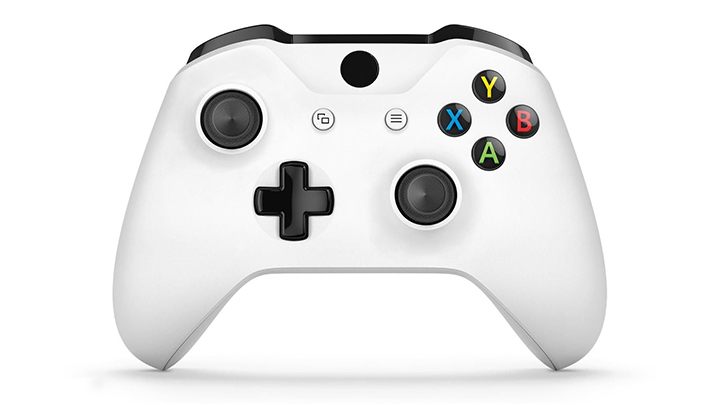 The good old joystick, which was once a must-have item for any gaming computer, is by far the most versatile solution. It will be useful not only for the Microsoft Flight Simulator, but also for combat aircraft simulators and space simulators. It provides the right ergonomics and much longer tilts of axes than in gaming controllers will allow for the right precision while controlling a plane.

If you want to buy a decent joystick, then forget about the cheapest models with just a few buttons. Your joystick should have three essential features:

Some more expensive models have several HATs right next to each other, as in real fighter jets, and the throttle lever may also be different. When selecting models of well-known, reputable companies, we can expect better quality of workmanship, useful additional software and above all, better precision in the long term of use. Cheap models may require recalibration in the Windows Settings more often than high quality equipment. 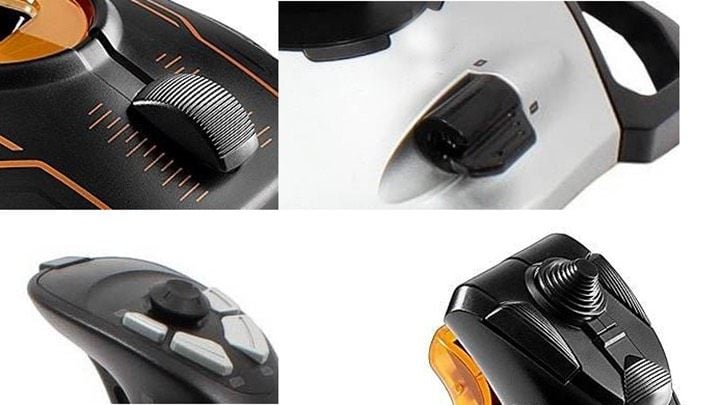 Regardless of appearance or manufacturer, the HAT and mini-throttle should be a must-have accessory for our joystick.

HOTAS - Hands On Throttle And Stick

If you treat flying a little more seriously, it is worth to have a separate throttle which, in addition to a very precise long range axes to control engine power, usually has a lot of additional buttons and extra axes to which you can assign the most important controls in order to make them always at hand.

You can find cheaper, universal designs on the market that do not refer to any particular aircraft, but are still very comfortable and have a decent quality. The more expensive HOTAS can be divided into two main categories:

Those of combat aircraft are, again, a little more versatile. They can be used for various types of simulators: civilian aircraft, combat aircraft, and spacecraft. They are characterized by the fact that the throttle handle itself has a huge number of buttons available under the fingers of the left hand as it rests on the lever. Military pilots use them to quickly track targets, etc. 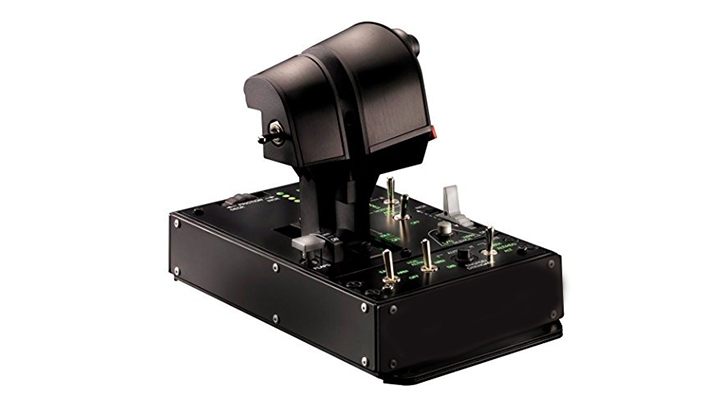 Throttles modelled on the cockpits of military aircraft are slightly more versatile.

Throttles for civilian aircraft do not have as many buttons. They usually have three separate levers: power, mix and propeller angle, because that's all that's needed to operate a modern turboprop engine. The more expensive models will have other key components, such as the height trimmer wheel and buttons dedicated to the complex handling of Autopilot. It's a good choice when we're confident we're going to stay mainly with civilian aircraft simulators. 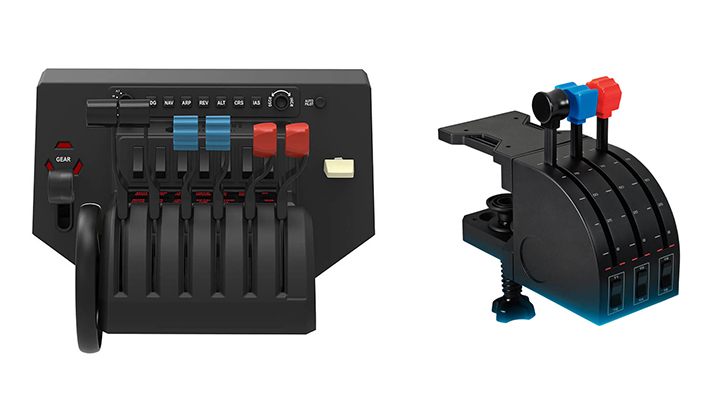 Depending on price and manufacturer, throttles modeled on civilian aircraft offer different functionality. From engine control alone, to convenient access to flaps, trimmer and Autopilot.

If we devote ourselves exclusively to civilian aircraft simulators, we should consider to get a Yoke instead of a Joystick. It somewhat resembles a steering wheel, which can also be tilted forward and backward. It is definitely a less universal solution and it will be hard to use it as controlling device in space sims or military sims, but for small Cessna or a large jumbo jet it's a perfect option.

Unfortunately, in comparison to a joystick, it requires more desk space and stable mounting to the tabletop. Similarly to HOTAS sets, we can also buy Yokes right away with a throttle, that is, in a set. 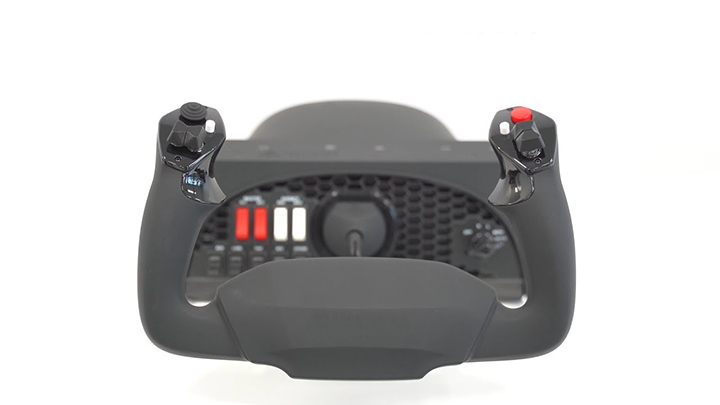 In order to complete our home airplane cockpit, we will finally have to make a decision if we want to buy separate set of pedals. They are not as essential as a joystick or a yoke, so you can leave them at the end. They are responsible for the aircraft rudder and wheel brakes, so we use them mainly during takeoffs and landings. At the beginning of your adventure with flying, you can leave these elements on the keyboard, but over time you will definitely appreciate the convenience of the analog rudder and brakes, which can be very useful during difficult crosswind landings. Separate wheel brakes are also helpful in making sharp turns during taxiing.

There are only few models of pedals available on the market. You can find cheaper models made of synthetics and solid high-quality pedals made of metals. The latter are quite expensive. They are also offered as a complement to the joystick + throttle sets.

Let us point out that these pedals cannot be used with driving wheels in racing games. In aircraft pedals, the entire device can be rotated to which a directional rudder is assigned. Thus, by pressing the pedals in a car racing game you will only activate car brakes.

Cheaper solutions should be enough for a start. However, we should pay attention to the spacing of pedals (some are very close to each other), which may be uncomfortable for some people and the way of fixing the pedals to the floor. Depending on whether we have carpeting or panels/tiles, they should have some sort of locking hooks and a double-sided tape. Eventually, they can also be leaning against the opposite wall. 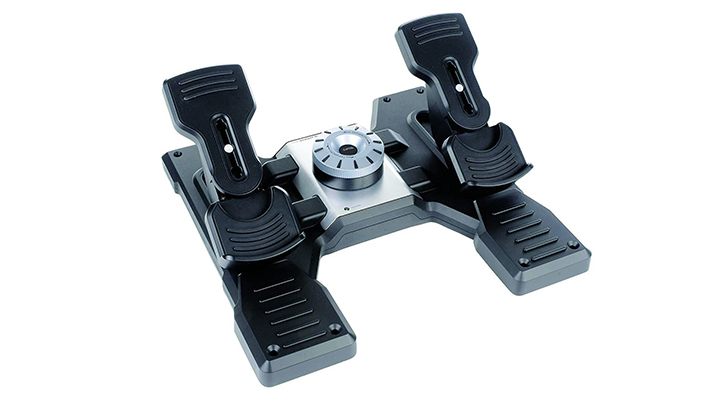 A device to track the movements of the head, or actually the eyes, is becoming increasingly popular in simulators. Thanks to it we don't have to operate the camera with a mouse - we look around the cockpit in a completely natural way, by pointing our eyes in the chosen direction. It takes a bit of getting used to it, because a slight nod causes the camera to rotate 180 degrees, but thanks to clever calibration and proper software it comes out quite naturally and doesn't cause any unwanted camera movements.

This quickly becomes very convenient, and in military aircraft or spacecraft simulators, when the pilot has to quickly follow the opponent during a circle-around combat, it is a mandatory option. This technology is also supported by games such as Euro Truck Simulator 2, DayZ, DiRT Rally, Elite Dangerous or ARMA 3. It is, in a sense, a cheap alternative to VR.

There are actually two commercial devices of this type on the market: Track IR and Tobii Eye Tracker, but in the world of flight simulators only the first one has been supported in Microsoft Flight Simulator. 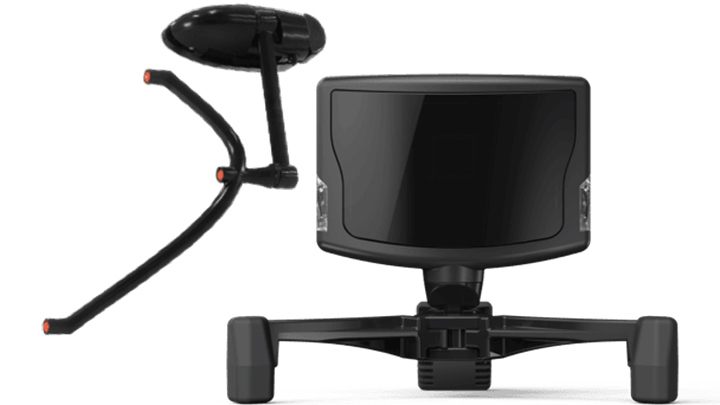 Head-tracking devices are expensive, but fortunately, cheaper alternatives can be found too.

The official Track IR device is very expensive. Alternative products, which are using webcam after small modifications and are based on free OpenTrack or FreeTrack software, are equally useful.

If you are looking for a cheap alternative to track head movements, it is worth to choose a device with a suitably adapted camera and a device mounted on a clip to the headset/headband, rather than a baseball cap, which is much less comfortable solution.

The second choice you have to make is the source of power: USB cable or battery. Here, a set without any cables is much more convenient. However, if you spend long hours flying, it is worth having backup power at hand.

It is also worth mentioning that alternative devices for tracking head movements are quite simple in construction and home-grown engineers will easily find schemes to create a three-digit headband on their own.