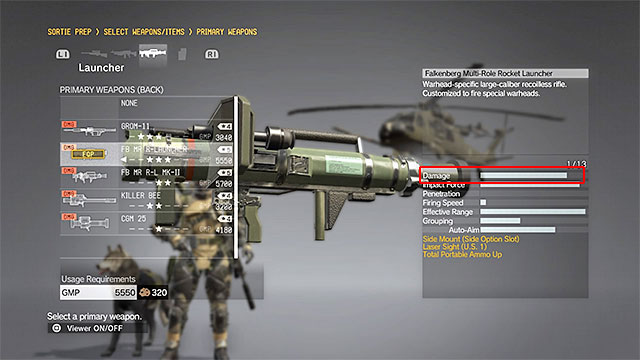 Before you start the fiftieth mission in Metal Gear Solid V, you have to prepare for it well so that you don't die after 1 or 2 attacks and the battle won't take too long. The first thing is your equipment. Taking the best rocket launcher that you have is an absolute priority. When browsing launchers, choose the one that deals the most Damage (the parameter is marked on the picture above). It doesn't neccessarily have to be a model with auto-aim, because you probably won't miss a huge target like Metal Gear. 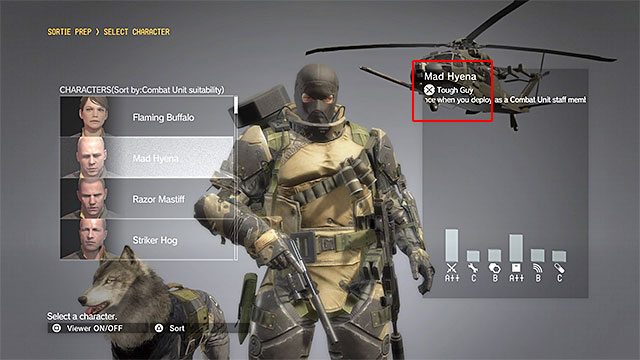 Another important aspect is switching Big Boss to one of the Diamond Dogs. To do that, select the Characters tab in the preparation menu and find someone with the Tough Guy ability (for example the character in the picture above). These characters have increased endurance. That's not all, because it is also good to equip such hero in the best Battle Suit available and a headgear (if possible). 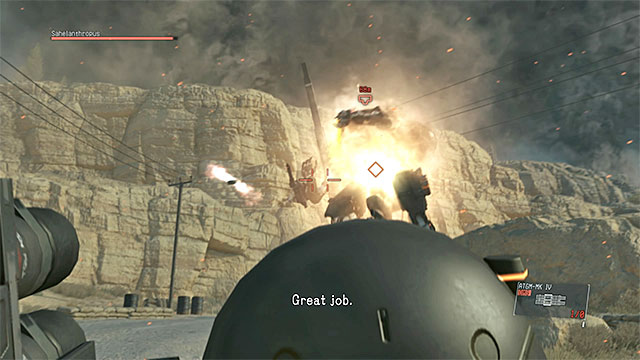 D-Walker will be only slightly helpful when fighting the boss.

The choice of your companion during mission number 50 is not that important, because just like in the first version of the mission, you mainly have to count on yourself (and on support from the helicopter). Choosing D-Walker will save you some credits and you can use all the rockets at the beginning of the battle (make sure that they are your main weapon). However, it will not deal a lot of damage to Metal Gear. 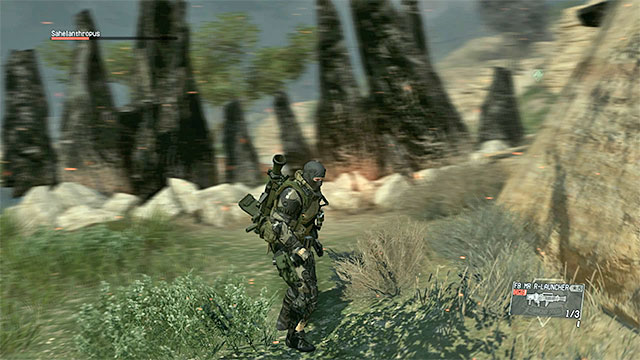 You can play the battle the same way as before. Focus on launching rockets towards the target and at first, aim at his head. This will allow you to complete an optional objective. Also, try to aim at the torso each time Sahelanthropus draws his swords, because this part of the armor is weaker then. Don't forget about calling for supply drops when you use all your rockets.

As it was mentioned earlier, Metal Gear deals much more damage on Extreme mode. You have to be especially careful when he uses stone spires. They can easily reach your hero and deal serious damage after they explode. Staying on the move is the best strategy. Moreover, you can use your rocket launcher when surrounded by spires, which will get you out of the trap. As for the rest of Sahelanthropus's attacks, hide behind the rocks when he tries to use his laser and when he launches missiles or drones (a lot of drones can quickly bring your hp bar to the end). 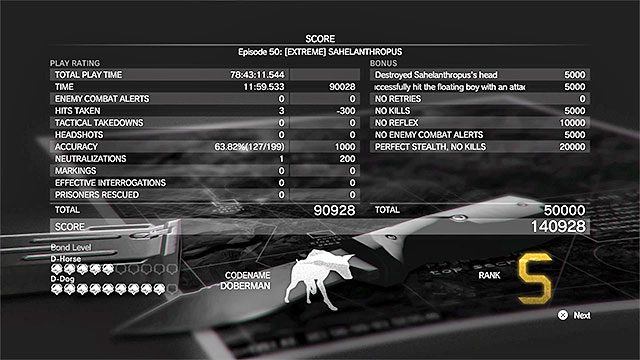 It is quite easy to obtain the S rank in the final mission.

During the last stage of the fight with Sahelanthropus, use the strategy described in the walkthrough to mission number 31. Keep shooting at The Floating Boy when the time slows down. As you can remember, doing this will make Metal Gear defenceless for a while and you can launch 1-2 rockets at him.

Winning the battle with Sahelanthropus is not as difficult as for example the second fight with Quiet. If you take proper equipment and use it well, you should win in about 10-15 minutes. You should also obtain the S rank.