This unofficial Metal Gear Solid V: The Phantom Pain guide will comprehensively present the extraordinarily complex and fascinating game made by Hideo Kojima. The entire guide has over a dozen of smaller and bigger chapters which describe things like the game mechanics, quests description or finding the hidden surprises. The first few chapters contain the tips about the game's basics. Following chapters are focused on exploring the game's world, the stealth mode, eliminating the enemies during a direct confrontation or using the help of your assistants. This part will be concluded with the F.A.Q. chapter with information like how to make a quick fortune or which scientific projects are worth your time. The most complex part of this guide is focused on the main plot walkthrough and it describes how to complete every quest in 100%. There is also a description of all 157 Side Ops you may unlock during the game. The following chapters will describe the collectibles and secrets (Cassette Tapes, Blueprints, Memento Photos and others), the proper management of the Mother Base and how to unlock the achievements. You should also notice that this guide has a lot of screenshots which will show you the most important areas or items. You will also find few maps which will help you to navigate in the gigantic area you are going to explore.

Metal Gear Solid: The Phantom Pain is the very last game made by Kojima Productions studio which is managed by Hideo Kojima. During this game you will play the Big Boss character, mostly in Afghanistan and Africa in 1984.

In this guide we have used the following color designation:

COLLECTIBLES AND SIDE MISSIONS

Last update : May 11, 2016, visit COLLECTIBLES AND SIDE MISSIONS 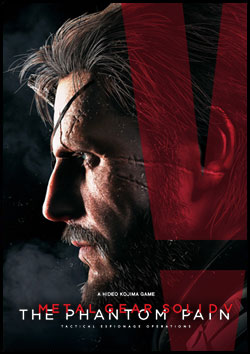 Metal Gear Solid 5: The Phantom Pain is another installment in the popular Japanese series of stealth action games created by Konami. The Kojima Productions studio is responsible for the production.

The main protagonist of Metal Gear Solid 5: The Phantom Pain is Punished Snake (aka Big Boss), one of the key characters in the Metal Gear universe, which is well known to the veterans of the series, thanks to Metal Gear Solid: Peace Walker among others. He wakes up after nine years in coma, which was a result of suffered wounds, including the loss of his left hand.

The creators introduced a lot of significant changes to the gameplay system. One of the biggest news is the open world, offering a lot of fun and freedom of choice of the path. Metal Gear Solid 5 is powered by a brand new engine – FOX Engine, developed by engineers and programmers of Kojima Productions.

MGS Story Recap: Watch before you play The Phantom Pain

Some people call Metal Gear's story a mess, thats why we decided to make a story recap before release of The Phantom Pain.