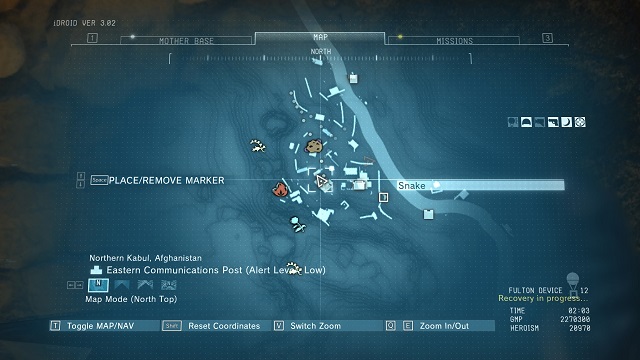 The location of two posters.

Two posters [Soviet Soldier and Glamour Girl (Horizontal)] are hanging on the walls inside one of the buildings, located in the South-Western section of the Eastern Communications Post in Afghanistan. The Soviet Soldier cardboard box in the vertical position allows your character to fool Russian soldiers, if you are in a safe distance from them. If you are in a risky situation and you stand still in a box, while directing the poster in the direction of the enemies, soldiers, after a short time, will think that you are one of them. Unfortunately, if you are too close, they will immediately attack you. The Glamour Girl (Horizontal) cardboard box, in the horizontal position (the character is crawling) causes the enemies, who notice the poster, to immediately run towards your position to take a better look. When that happens, you can either quickly get out of the box and attack the enemy to incapacitate him, or leave it unnoticed and go to a safe spot.

Note - You should use Soviet Soldier poster when in Afghanistan and PF Soldier when in Africa. Choosing a poster with the wrong soldier will not bring you the required effect.