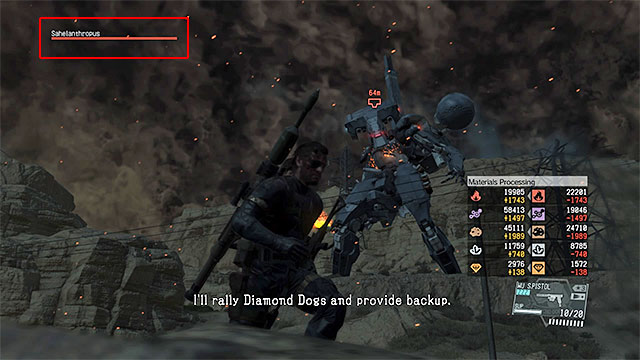 Sahelanthropus' health bar can be found in the upper left corner of the screen.

Mission 31 of the Metal Gear Solid V game is entirely devoted to the encounter with the Sahelanthropus. The huge mech must be defeat in direct combat. You have to, practically, do this on your own, without any backup, as the helicopter with your allies on the deck will appear on the battlefield only from time to time, helping you only a little bit.

The Sahelanthropus' health bar can be seen in the upper left corner of the screen, and your main task is to, obviously, deplete it. Don't worry that the process will take a long time, as the enemy is heavily armored, and achieving success over the mech will take several minutes at the very least. A thing worth noting is the fact, that during the whole encounter there won't be any checkpoints, so if you die during it, you will have to start over from the very beginning of the fight. It's a good idea to remember about that fact and to not take unnecessary risks, and regenerate Big Boss' health in a safe place each time you sustain serious injuries (more on that topic can be found in the further part of this section).

The following pages will describe main attacks of the Sahelanthropus, as well as the suggested tactics which should be most effective against the enemy.