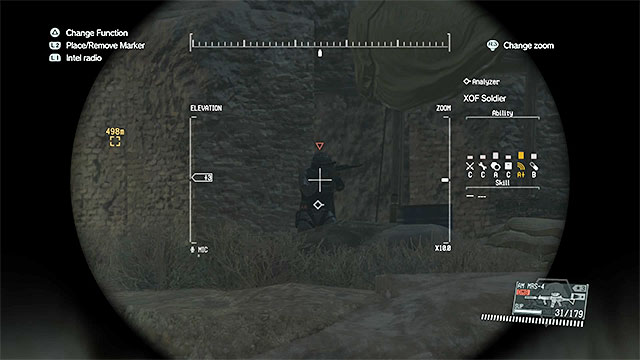 The first thing that should be done after getting to the OKB Zero base is to locate the second enemy wielding a sniper rifle. That foe can be found right next to the wall on the right side. If you have access to your own sniper rifle, use it to eliminate the enemy as soon as you have the opportunity. If, for some reason, that's not possible, you will have to sneak by the enemy very carefully, avoiding sections of the map that are better lit, reducing the danger of being spotted. 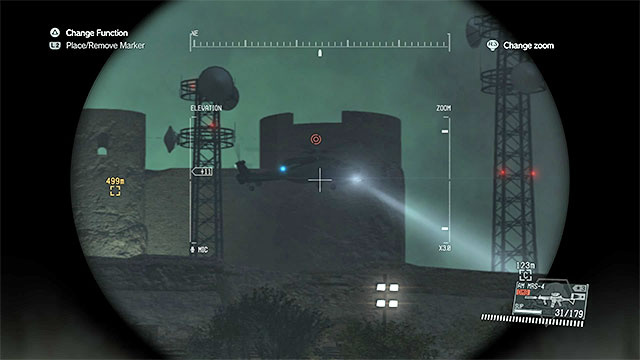 Avoid the enemy helicopter throughout the whole mission.

During your march through the enemy base, you should remember about a couple of things other than the enemy sniper. There will be a helicopter flying around the base all the time, and you have to do whatever it takes to remain hidden from the machine crew. If they manage to locate you and aim their searchlight over your position, quickly lie on the ground, use the sneak mode and don't move until the helicopter flies away. Additionally, watch out for the two-man patrol squads, which, obviously, are quite a challenge to eliminate, the new Walker Gears patrolling around the main route, as well as the enemies that are using searchlights to illuminate the area. Searchlight can be easily avoided - you must simply wait for the soldier to direct it in another direction. 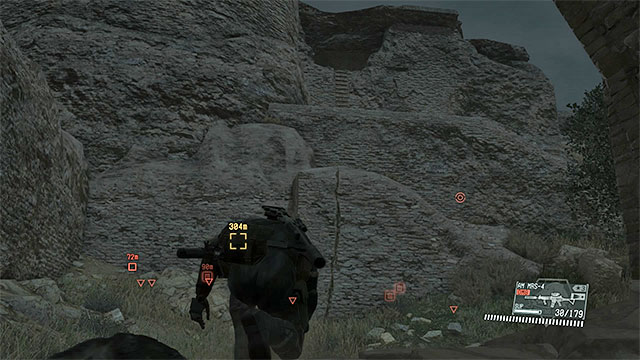 Another wall that can be climbed..

Just like the last time, there are two routes leading to the second section of the enemy base. Going through the gate is an extremely bad choice, as there's a high chance of being detected by enemy Walker Gears, as well as the helicopter patrolling the sky. Check the area to the left of the gate, and you should be able to locate the wall that can be climbed, which will get you to the further section of the base without the risk of being detected. 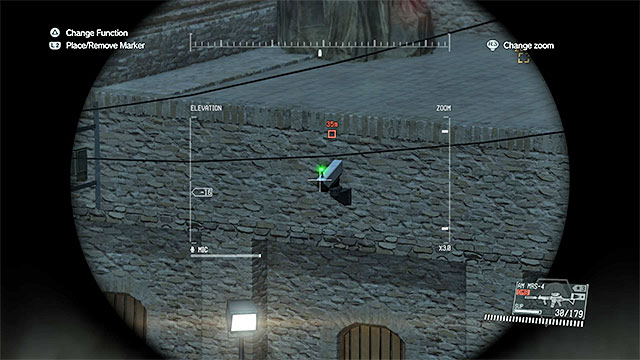 There's a novelty in the section of the enemy base - surveillance cameras.

The second section of the enemy base is an area you should be more careful while moving in - it's a lot smaller, which means that the enemies are more densely deployed. Use D-Dog to perform reconnaissance and pay attention to the enemies located on the upper walls, as they are able to detect Big Boss from a greater distance. The main novelty of this part of the base are surveillance cameras. You must avoid getting in their vision at all costs, as well as refrain from destroying them, as every attempt of doing so will alert enemies, who will go check why they suddenly have no vision. 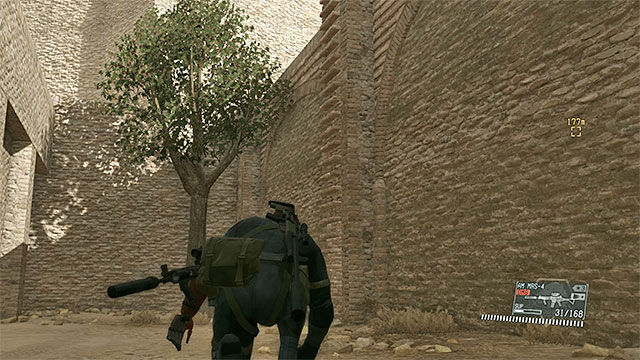 A ladder, leading to the upper walls of the base.

This section of the map yet again gives you to the choice of whether to get through the main gate, or to look for an alternative approach. Just like before, the latter solution is the better one. Focus on the walls on the left from the gate and locate a ladder, which will allow you to get to the top of the said walls. Don't rush, as there's a high chance of enemies patrolling the nearby area. Distract them, or simply wait for them to move away before climbing the ladder all the way to the top. After getting to the upper walls, use the passageway leading to the third and final section of the enemy base. 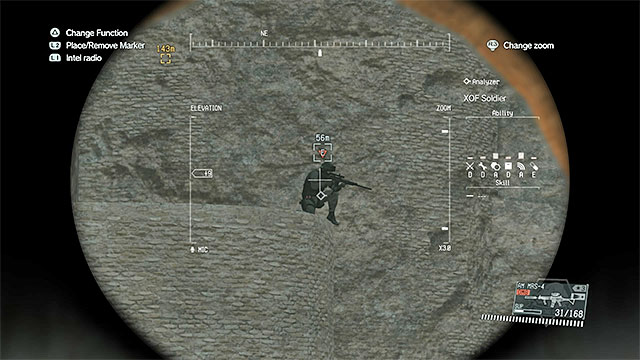 You are very close to your mission destination, but you shouldn't rush, as there's another (fortunately the last one) sniper nearby. The soldier can be found on one of the vantage points, located to the left of the gate. You can either take him out from a distance, as well as sneak up on him from the flank. After you've dealt with him, check the area below you and make sure that there are no Walker Gears there, as well as if the enemy helicopter isn't nearby. When both of those conditions are met, you should head towards the main entrance of the base. 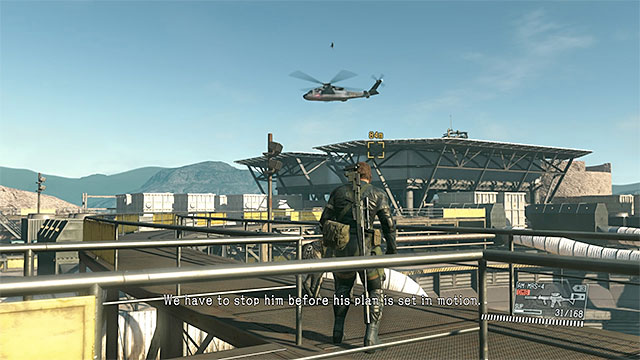 The final part of the mission is trivial, because there are no enemies in the area anymore. After getting to the mains section of the enemy base, ignore the elevator shaft and use the nearby stairs, which will get you to the upper floor. From here you have to head towards the helicopter landing pad, where the Skull Face awaits. After getting there, a partially interactive scene will begin, during which you must make sure that Big Boss follows Skull Face and gets into the jeep.