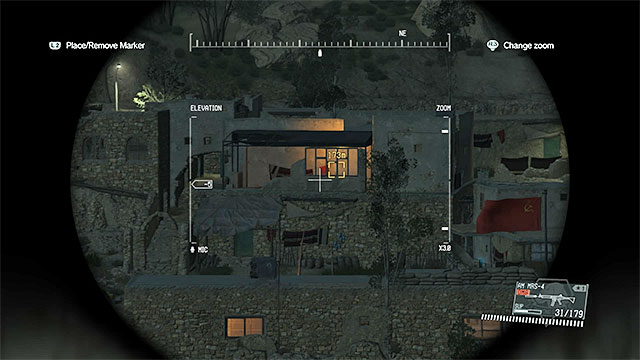 Regardless of whether you found the file or not, you need to get to the Da Ghwandai Khar village in the Eastern part of the map. Along your path, you should watch out for, at least, one more outpost. Just like in the case of the previous village, start by climbing to a high vantage point (a good one is to the West of your destination). Use the binoculars to mark all of the soldiers that you can see. Apart from that, locate the building shown in the above screenshot - this is where Kazuhira is being kept. 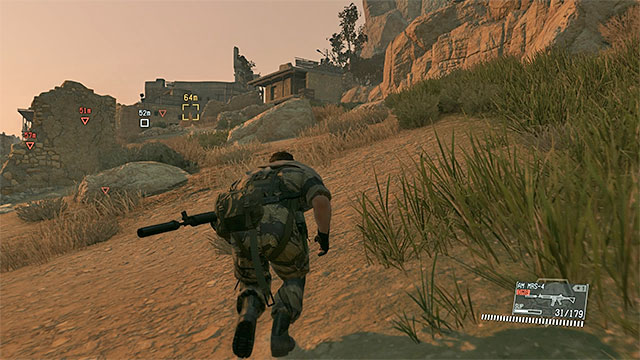 Cross the most poorly guarded part of the village

I recommend that you approach the building from the South-East, because this part of the village is relatively poorly guarded. Stick to the rocks and crouch (if necessary, you can also crawl). Depending on how good was your reconnaissance, you can either head straight towards the buildings, or hide behind corners of the nearby cottages to check out on the immediate area. 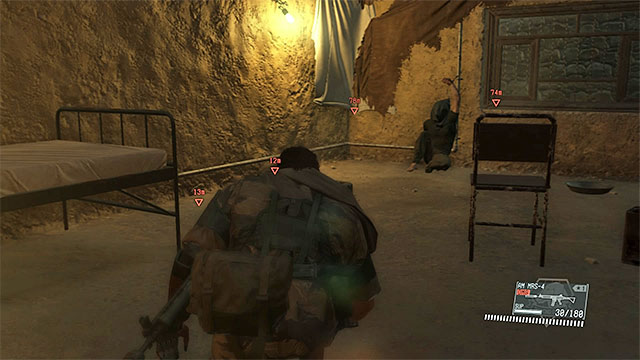 Before you reach your destination, try to secure the entire Northern part of the village, which will make it easier for you, later into the mission. Hide the stunned opponents behind buildings, in the way that prevents them from being discovered prematurely. You can enter the building you are looking for, either in the traditional way, or by climbing onto the rooftop of one of the nearby cottages, from where you jump onto the rooftop of that particular one. Be vigilant here, because there may be someone in the main room and, apart from that, you can be spotted through the window. Kazuhira is being kept in the smaller room - approach him to start a cutscene. 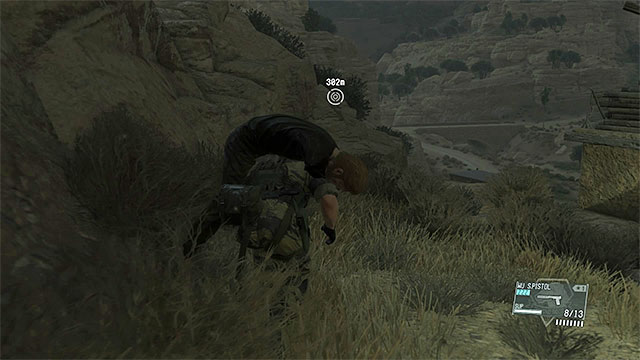 Carefully, carry the man out of the village and head towards the nearest landing spot.

You need to make it out of the village. Since your character is carrying Kazuhira. You can your use pistol only and, it is because of the limited movements that it was so important to secure the area beforehand. Leave the village the same way you came, so reach the Northern part of the village and head South-Eastwards. Head towards the designated landing spot. The attempt to extract the man will fail and Skulls appear. 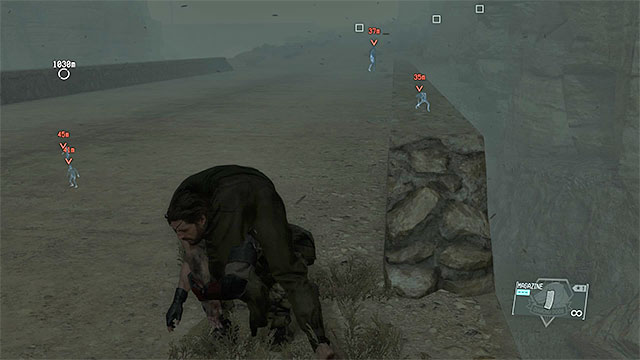 Skulls are zombie of a type. However, do not let them trick you, because moving slowly is only their default mode of movement and they have quite a wide range of vision. If you let them spot you, they will become more vigorous and you will stand no chance against them, in a direct confrontation (in such a case, you will have to escape on horseback).

It is much better to leave the dangerous zone and remain undetected, especially that this will reward you with completion of one of the secondary objectives. Focus on the two zombies heading towards the bridge (the above screenshot). Wait for a bit longer - the zombies should either stay on the bridge or take the path to the side. Depending on what they did, take the safe route and walk away from the area, with Kazuhira on your back.

Note - If the zombies separated, use, e.g. an empty ammo clip to encourage them to go in the same direction.

Warning - If you don't want to be slowed while avoiding the zombies you may put Kazuhira on a horse and move forward alone. After bypassing the Skulls squad you may call your horse who will appear with the hurt ally as well. 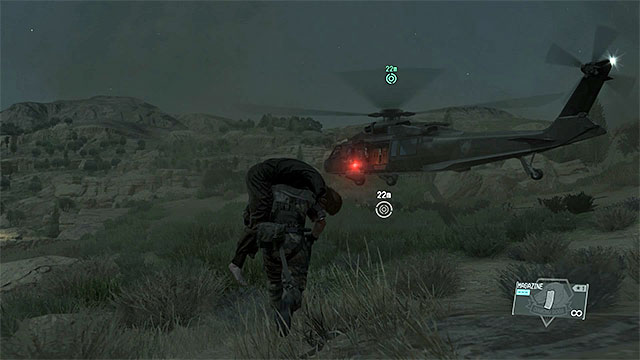 To end the mission, you need to go to the second designated landing spot, close to the Da Wialo Kallai village. Along your path, watch out for the enemy outposts. Put Kazuhira on the board of the chopper. If you want to end this mission at this point, you simply need to get into the chopper yourself and wait for it to fly away (alternatively, you can complete secondary objectives, if you have missed them).