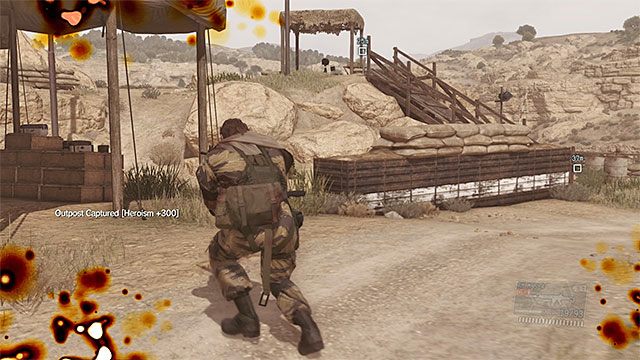 The risk of being wounded is a natural part of each direct confrontation with enemy forces. Healing mechanism in Metal Gear Solid V is rather simplified. All "regular" wounds will be automatically healed as long as you provide a few calm moments for Big Boss to regain full strength. So, whenever it is needed, try to find a safe hideout. Sometimes, the main character might receive some serious wounds. In that case the only way to heal him is holding the action button. You shouldn't ignore such wounds, because of them Big Boss might not be able to run or jump on a horse. It might make it much harder to win a battle or escape from a dangerous territory.

Important - the character you control can receive injuries or die in many different ways. Most of all, avoid falling from high altitude, touching the mines placed in some locations, standing near objects that might explode (like barrels) and move on open terrain in locations patrolled by enemy machines.

If you fail in healing the main character and he will die, you can return to the last checkpoint or restart the whole mission. You should select the first option, thanks to that you won't lose too much of your progress (the game creates new checkpoints regularly). Repeating the whole mission is useful only if you're attempting to obtain the highest score and rank.