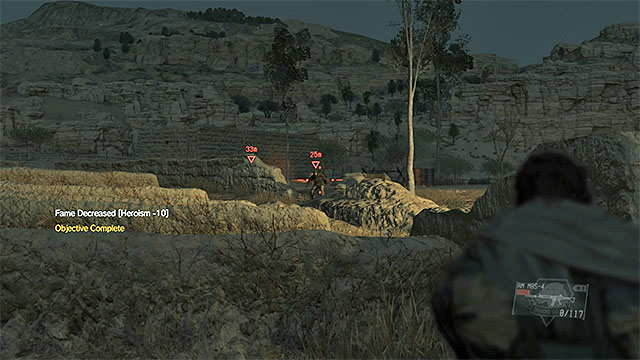 Metal Gear Solid V awards remaining undetected, but in some circumstances it is recommended or even required to participate in direct confrontations with enemy forces. In some cases it happens due to the game storyline. However, mostly it happens when you weren't cautious enough and you've alarmed the enemies.

Once the battle starts, you can of course try to escape (preferably on a horse or inside a vehicle), but you can also choose to remain on the battle zone. During the battle, most of all try to regularly use cover (Big Boss automatically sticks to them) or, if it's not possible, lie on the ground and try to attack enemies from higher grounds. Assault rifle works best in eliminating regular soldiers. You should aim at enemy heads. Grenades can be helpful as well as long as you precisely aim where to throw them. A well aimed explosion can hurt or eliminate few enemies at once.

Enemies are eager to use grenades as well. When you notice that someone is preparing to throw a grenade, shoot at him and try to disrupt him. If it's too late for that, then quickly move someplace else. Otherwise Big Boss will be knocked to the ground or he will die. In addition to grenades throw, you should also look out for actions like trying to surround you. Additionally, you should aim to finish all confrontations as quickly as possible. Otherwise, the enemies might call for reinforcements.

In some situations, melee attacks might be helpful in eliminating opponents. You should decide to use CQC when a single opponent has gotten close to you. Don't try to fight opponents with your fists when there are more than one enemy nearby. You can perform few hits in close combat or a throw. In both cases the attacked guard should be knocked down to the ground and stunned - it means you can additionally use Fulton on him. 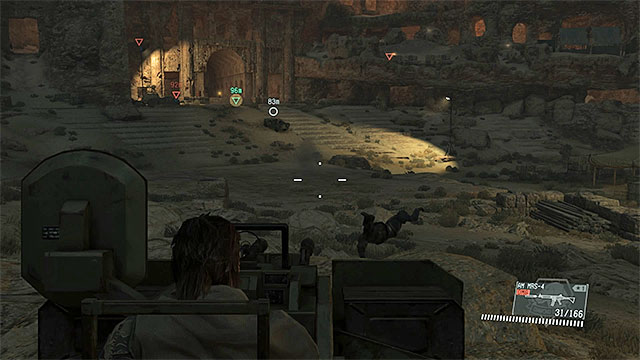 You can use enemy defense systems for your needs

You can also use some heavy equipment for eliminating opponents, like, for example, a grenade launcher. You should also look around for military equipment that can be found in the battle zone. You can, for example, find an armored vehicle and take control of its weaponry. It is also a very good idea to find fortified stationary cannons. Many of them allow you to attack enemies with heavy fire. Of course, when using them you can't move around and enemies might try to use that. Some of them also have a limited range.

Important - Confrontations with enemy vehicles and flying machines have been thoroughly described on one of the further pages of this chapter of the guide.