Once again, you won't need a map here, because you'll be exploring the flak tower for the most of the time. If you decide to follow my instructions, you won't have any problems eliminating all three halftracks and you won't risk your life during these fights. Your only concern will be to eliminate one of the enemy snipers.

You've got a lot of options here, however if you don't want to have any problems with this particular objective, you should consider following my exact instructions. You will have to land near the northern side of the flak tower. Check the screen, because that's where you'll have to touch the ground. If you increase the velocity of your approach, you shouldn't suffer any injuries while you're still in the air. You should also know that the landing site won't be guarded by anyone. 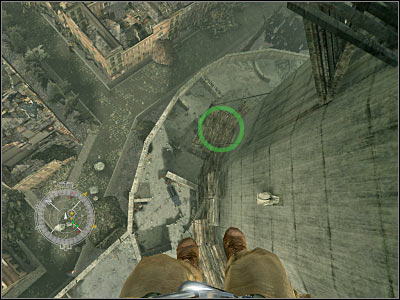 You may enter the flak tower. There's a corridor here, so you won't have to leave this area looking for an entrance. If you had already disabled both elevators, you should be safe here, because you won't encounter any soldiers. Your task is going to be very simple. You must locate a cargo elevator in order to use it. There's a small button here. Press it (screen). 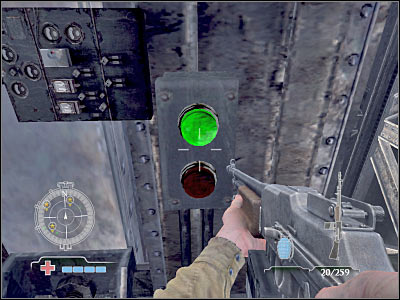 Obviously you will have to wait for the elevator to get here. Enter the elevator and look for a small handle. Pull it. The elevator is going to start. I'd strongly recommend that you hide behind some of the nearby crates. Wait for the elevator to reach its destination. You will probably see a few soldiers here. Don't attack them. Instead, try moving towards new crates (screen). It would be wise to stay out of sight for the time being. 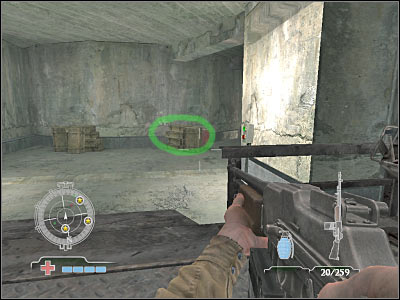 You should be able to see some explosive crates in the distance (they're red). Try shooting at them. Obviously this will cause a huge explosion. Not only will you get rid of all soldiers, but you'll also neutralize the first halftrack, without even getting closer to it. Take a look at the screen if you're having some problems finding it. 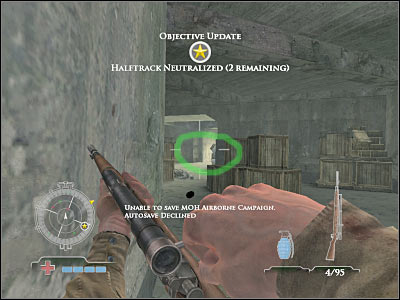 Now you will have to start moving towards the right corridor. It's very easy to find and you won't encounter any soldiers along the way. The second halftrack can be found just around the corner. Check the screen, because that's where you should be standing. Sadly, destroying a barrel won't be enough. You will also have to kill the gunner. Use the machine gun. 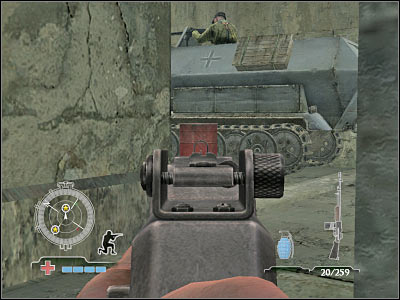 DON'T go back to the tunnels. Instead, head on to a destroyed halftrack. There's a large exit from the flak tower to your left. You must go there now. Be careful, though. You will encounter several enemy soldiers here. Eliminate them quickly, before they manage to use grenades against you. I'm sure that you won't encounter any major problems here. Turn left and start moving towards your final (third) target. 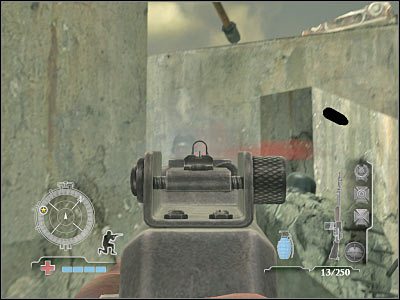 Before we'll deal with the halftrack, you will have to kill a sniper I was telling you about. It's a very important thing, because you would have been exposed to his fire while trying to disable the vehicle. Lean out only for a short period of time, so you will be able to kill him. Thankfully, you won't have to worry about any other snipers. 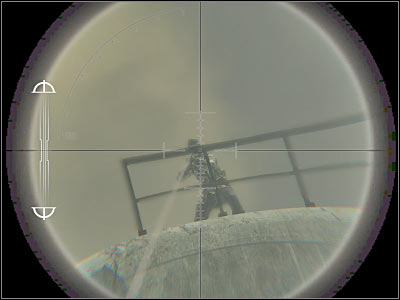 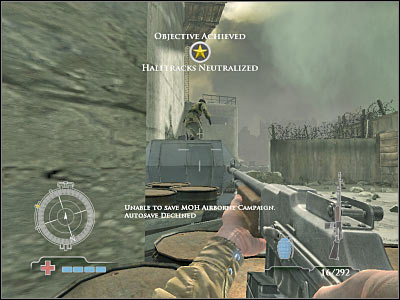