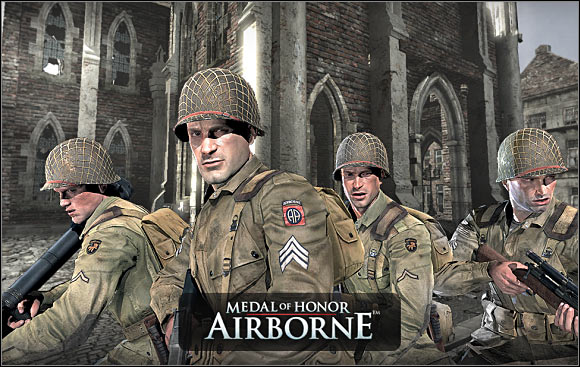 Welcome to the unofficial game guide for the latest addition of the "Medal of Honor" series - "MoH: Airborne". This guide consists mainly of a detailed description of all missions of the singleplayer campaign of the game. You should know that for the most of the time you will be allowed to fulfill given mission objectives in any order, however sometimes you will have to stick with the main plan, following the only route to a current destination. Each mission description contains several important things. First of all, you will have an opportunity to take a look at a global map, so you'll know where to go. I've displayed all objectives and told where they are. You will also find out where to land, however remember that it's always up to you to choose a landing zone. There are at least two different paths leading to each goal area and I've tried my best to show them to you. I've also added a few hints about the best tactical approach. Some of these actions won't be spectacular, but you'll be able to reach your goal much easier or you will have an opportunity to surprise enemy forces.

I would also like to say about a few very important things. Make sure that you've read and understood these hints:

- "Medal of Honor: Airborne" is a much more difficult game than some of its predecessors. As a result, I wouldn't recommend being in a lot of hurry. Otherwise you'll probably end up dead and you'll be returned to the nearest checkpoint area (which is probably going to be an allied plane). Also, make sure that you advance to your target properly. You will have to use nearest objects for much needed cover. Additionally, don't forget about the sprint feature. It's going to be very helpful, especially if the area is not safe and you want to reach a building or a better cover area. You should also consider attacking enemy units from one of the flanks, however make sure that they don't see you coming. It would also be wise to occupy buildings and other higher grounds for a better view of the surroundings.

- Make sure that you're checking your health bar very often. You shouldn't have any major problems finding first aid kits, however I wouldn't recommend losing health bars by taking part in very dangerous actions. Also, it would be wise to wait for the health bar to replenish itself, however this will only include a current slot. If you lost an entire slot, you won't be able to get it back until you've found a med kit.

- It's always very important to land in a strategically important location. Thankfully, you will be allowed to practice parachute jumps by taking part in a short tutorial section of the singleplayer campaign. I'd strongly recommend getting ready for each landing, so it won't be botched. Otherwise you wouldn't be allowed to use your gun right away.

- Don't forget that you can't create any quicksaves during the course of the singleplayer campaign. There are only autosaves and they are being created each time you've reached an important area or fulfilled one of the mission objectives. As a result, I don't recommend taking part in dangerous fights, however you can't stay in one place for too long, because enemy troops will receive reinforcements.

- It would be wise to choose favorite types of weapons at the start of the game. This means you will be using very often and you will be able to upgrade your guns much faster than usual. I prefer sniper rifles to standard machine guns, but the choice is yours. 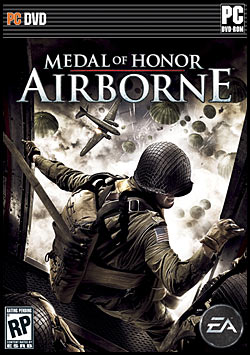 While building on the key tenets of the franchise including historical accuracy and authenticity, Medal of Honor Airborne is set to redefine the series by introducing players to an entirely new way of experiencing a WWII FPS - notably the fully interactive Airborne experience.

Step into the boots of Boyd Travers, Private First Class of the 82nd Airborne Division and engage in battles throughout Europe. From rocky beginnings in Sicily to war-winning triumphs in Germany, each mission begins behind enemy lines, with an intense and fully interactive airdrop. View the entire operation from the air, and then control your parachute to choose your landing spot. On the ground, gather your senses and assess the terrain. A wide variety of authentic, customizable weapons are at your disposal, each with distinct characteristics. Choose your path in this free roaming FPS environment.

The Medal of Honor Airborne development team continues to ensure that the ideals and integrity of the prestigious congressional Medal of Honor are accurately reflected in the game. The producers sought counsel from numerous expert sources to make certain the game is historically accurate and as true to the WWII Airborne experience as possible. Serving as a military spokesperson for Medal of Honor Airborne, Capt. Dale Dye, who has worked as the Military Technical Advisor for the last 7 Medal of Honor games, will help to create a truly authentic experience.

- Missions in a free-roaming FPS Experience the intensity of a cinematic, story-driven game with the freedom of NON-LINEAR missions in a free roaming FPS environment.
- Start each mission with a fully interactive airdrop into enemy territory. Your landing spot can dramatically change the way each mission is played out.
- A wide variety of historically accurate CUSTOMIZABLE WEAPONS are at your disposal.
- Develop skills on your personalized weapon with field modifications that remain persistent throughout the entire game.
- Medal of Honor Airborne will present the MOST BELIEVABLE HUMANS in a game.
- Utilizing the very latest technology to deliver truly believable humans within the gaming environment.
- Dynamic Online play

Medal of Honor: Airborne Game Guide is also available in our Mobile App