You may have some problems with this particular mission objective. You'll be exploring a large warehouse building for most of the time, so you won't have to worry about encountering any snipers. Instead, you will have to avoid soldiers with better chest armors and heavy machine gun posts. The munitions stockpile will be located in the basement, so you'll have to travel a long way in order to reach it. Thankfully, you will be clear out rooms using various approach methods, so you won't be going in a straight line. 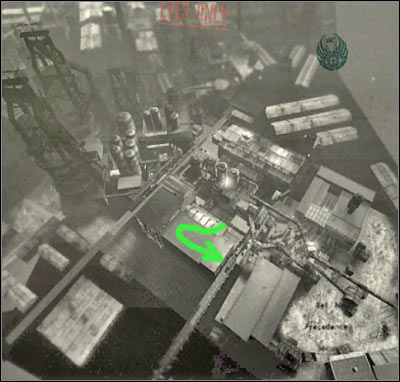 The landing site is going to be located in front of this warehouse. Check the screen if you're having some problems finding it. Obviously this is going to be a bonus zone (Skill Drop), however you must land INSIDE the warehouse. As a result, you will have to slow down your approach once you're close enough to the ground. Thankfully, you won't be dealing with any troops at the same time, so you may focus only on receiving a proper bonus. 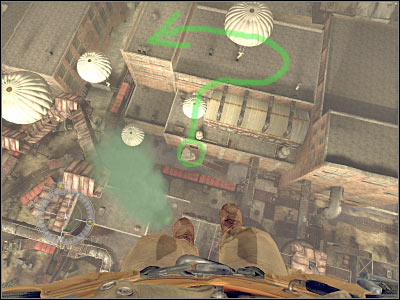 Once you've safely landed on the ground, you should consider choosing a machine gun from your inventory. The entrance should already be secured, so you don't have to worry about anyone surprising you from the back. Enter the warehouse and start shooting at the visible enemy units. Make sure that you're not standing in the open, because that would make you an easy target. You will have to kill at least 2-4 German units. 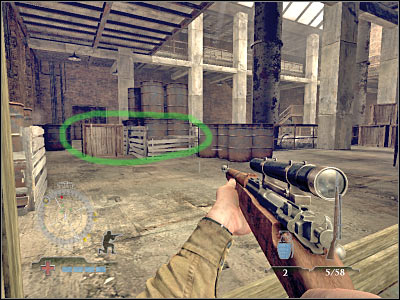 Try securing this section of the warehouse. Once this is done, I suggest that you turn left and explore that area of the warehouse. You'll encounter some additional troops there. Be careful while you're close to the left room, because a small group may be hiding there. It would be a good idea to kill them right away. 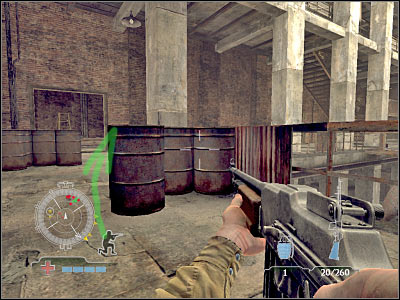 In order to secure this passage, you will have to wait for enemy troops to get here. You could also wait for reinforcements to show up. Make sure that you're using a machine gun during these fights. You can also throw a couple of grenades at enemy soldiers, however I would recommend saving them for later. 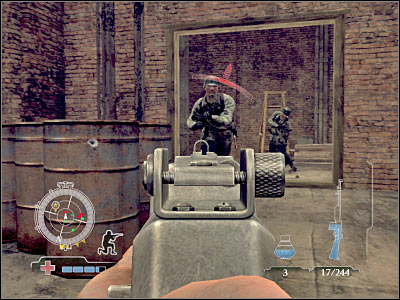 Now you will have to turn right. Hide behind one of the nearby barrels. There's a large staircase in front of you. Don't go there. Instead, try securing it. You will have to kill all of the remaining enemy soldiers. Use the sniper rifle if you're having problems killing them. You should be able to take full control over this floor very soon. Go back to the entrance and turn left. There's a second corridor here. You haven't checked it before. Now's your chance. 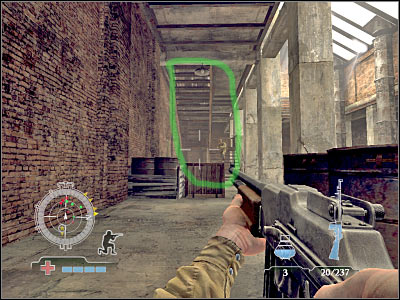 Keep heading forward. There's only one passageway here, so you really can't get lost. You should be able to reach the stairs. The munitions stockpile is in the basement, so you will have to get down to the lower floor. You could also try and neutralize the heavy machine gun post from here, however it won't be necessary. 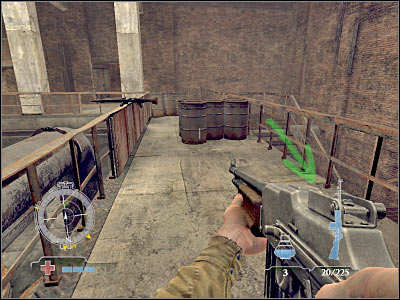