The first task of this mission will require you to land in a very difficult spot. Not only you will have to be very precise, but you're also going to have to eliminate one of the enemy soldiers. This has to be done almost immediately after you've successfully landed. Thankfully, it's not going to take a lot of your time to reach the radio station and you will only be attacked by two larger groups of enemy units. Furthermore, you will receive assistance from some of your colleagues. 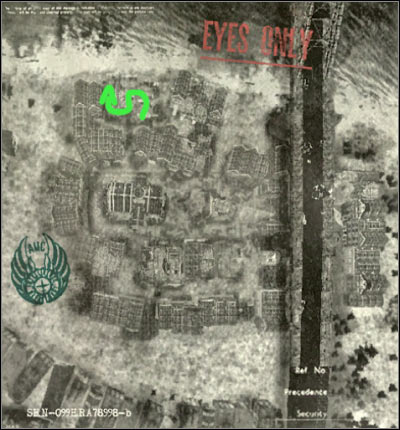 The building you'll be trying to get in to is located in the northern section of this map. Take your time and familiarize yourself with the surroundings. It's not as bad as it looks. :-) That's where you'll have to steer your parachute. Like I've said before, you'll land near your first target. Obviously this is going to be a bonus zone (Skill Drop). The landing itself can prove to be quite difficult, especially since you'll have to knock down of the enemy soldiers. If you land a little bit higher, you may also consider attacking him with your gun. Either way, you will have to be very precise here, not only to receive a bonus, but also to survive. 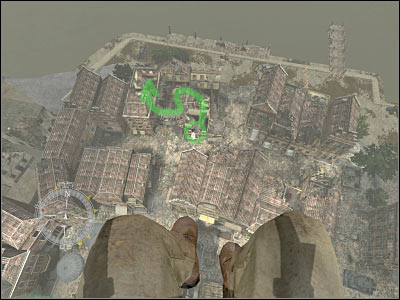 First of all, you should near the left wall. Take your time and explore this area. You will also have to check your compass in order to find out exactly how many soldiers you'll be dealing with. Make sure that no one surprises you. Thankfully, you'll be dealing with single soldiers or smaller groups, so it shouldn't be much of a problem. 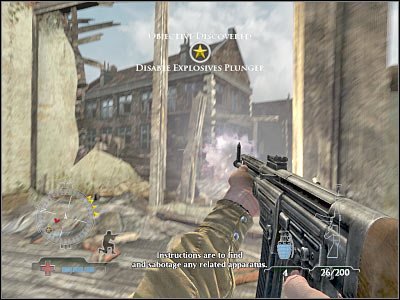 There's a ladder nearby, however I wouldn't recommend using it, because you would find yourself in a very uncomfortable position. Instead, try going north and then turn to north-west. As a result, you should be able to reach a new room (screen). Choose a good machine gun from the inventory, because you'll take part in a few fights. 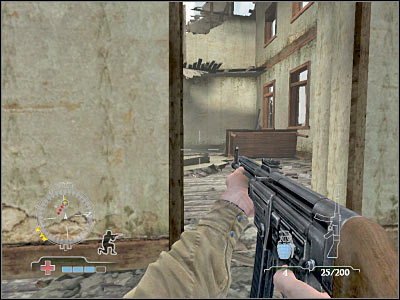 This room is going to be guarded by at least 2-3 enemy soldiers. You won't have to use any of the carried grenades to kill them. Instead, try aiming at their heads. You could also wait for them to leave their cover areas, however don't expect for them to attack your main character. You won't have to worry about other passageways, because it's highly unlikely that someone appears there. 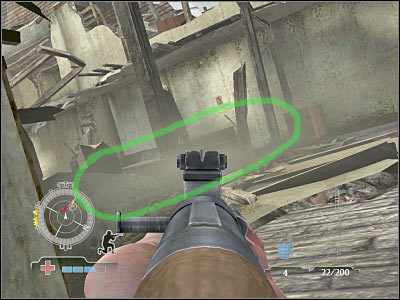 Once you've killed all enemy soldiers, try moving closer to the stairs. Be careful, though. Most of the upper floor will be occupied by new enemy units. Additionally, some of the enemy soldiers may actually try and advance towards you. Attack them while they'll be using the stairs. Consider choosing long bursts, instead of single shots. You will also have to watch out for your back, because other German soldiers may try to perform surprise attacks here. 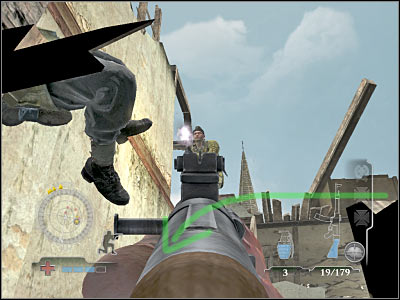 Once you've reached the upper level, hide behind one of the available objects and wait for a few of your colleagues to get here. Once this is done, lean out and start shooting at the enemy soldiers. You should be able to take out at least two of them from here and you won't have to worry about them using grenades against you or your teammates. 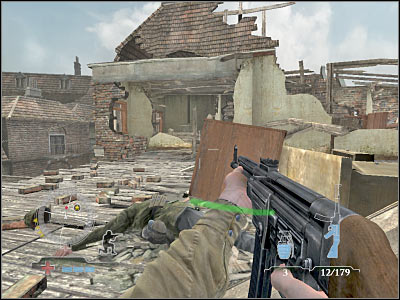 Try getting closer to your main objective. The last group is defending the radio which is located to your right. This time it would be a good idea to use at least one grenade, however you could also try and lean out a lot. As for the radio equipment, one successful shot will take it out, so you won't even have to get closer. 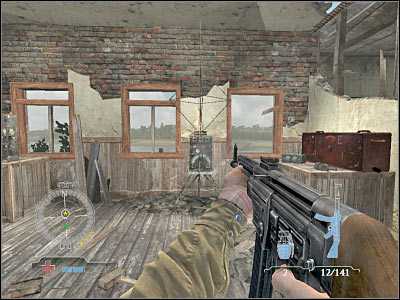