Your first task for this new mission will require you to assemble a very powerful weapon, so you'll be able to use it against an enemy tank. In order to do this, you will have to collect four different parts. They will be scattered throughout a large area, so it's not going to be easy. This part of the mission will take place near one of the green zones. Your main concern is going to be an enemy tank. It will appear on the map once you've picked up your first part (it doesn't really matter which one it's going to be). Sadly, you won't be able to destroy the tank until you've picked up everything. The good news is that you will be allowed to save your progress once you've collected each part, so even if the tank kills your character, you won't have to start everything from the beginning. I would recommend splitting this objective into two parts. First we'll going to pick up three items and then we'll only go for the final (fourth) object. 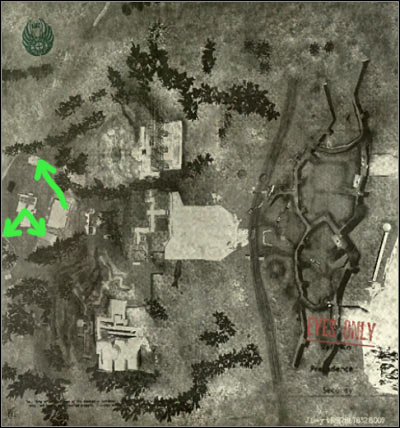 I've already mentioned before that you should land twice in order to ensure a safe victory. Let's begin with the first landing and I'll explain the second one later during the course of the mission. The best landing zone for this particular goal is a roof area for a small house. I'm sure that you won't have any problems finding it. Not only you will receive a Skill Drop bonus here, but you'll also land near one of the components. 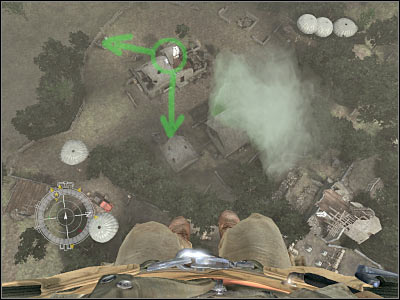 Make sure that you've landed on the roof. Otherwise you won't be rewarded with any bonuses and you would have to spend at least 20-30 seconds finding the ladder. DON'T leave this area just yet, because you will find your first component here. Step up closer and press the action key to pick it up. An autosave will be created here. You will also be presented with a very important cut-scene. As you've noticed by now, an enemy tank has arrived in the area. Sadly, you won't be able to destroy it at the moment, so you'll have to avoid its attacks. 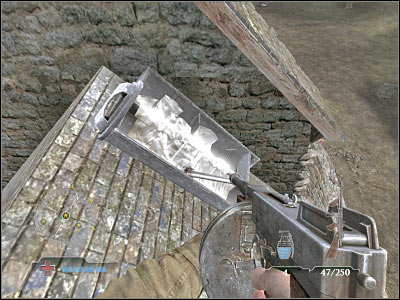 Once you've regained full control over your main character, turn right and IMMEDIATELY leave the roof area. You can't stay here for more than two seconds, because the crew of the tank would have automatically spotted you. Once you're safely on the ground, enter this small building. You should be quite safe here, because the tank won't destroy any of the surrounding walls. Just make sure that you aren't standing close to a door or a window. Check all rooms. You will find medkits an explosive ammunition. Pick it up! 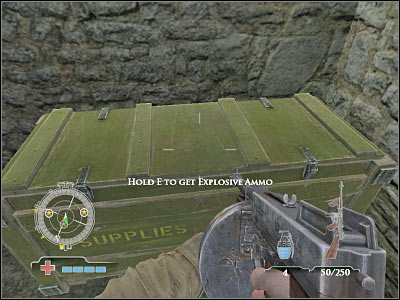