This is going to be a rather challenging task, mostly because there's only road leading to the top of this hill, so you won't be able to surprise all enemy units. There are a lot of enemy soldiers in the area. As a result, you must stay focused in order to avoid making major mistakes. Thankfully, other allied soldiers will take part in the assault, so they'll help you out a little bit. Don't be fooled, though. The success of this mission depends solely on your behavior. 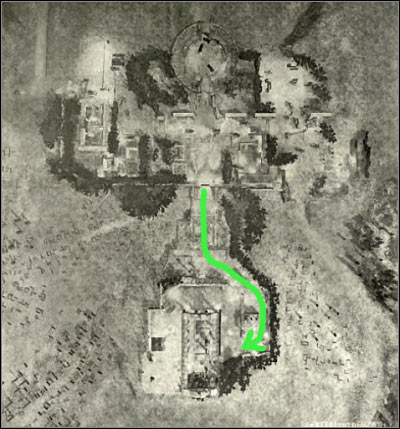 You will begin near the stairs. You will have to use them to get closer to the top of the hill. Obviously you shouldn't be in a lot of hurry. Before you decide to proceed any further, try taking out several opponents from a larger distance (you must use a sniper rifle). Ignore your colleagues. There's no time meter on the screen, so you can plan your each move very carefully. Once you've secured the area in front of you, start moving forward. Use nearby objects for cover. 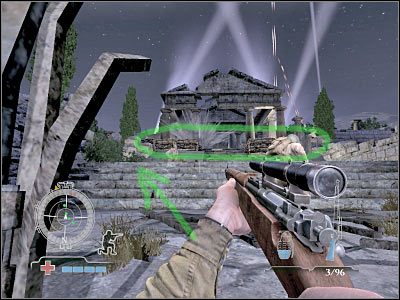 I'd strongly recommend that you choose a passageway which should be located to your left. This will allow you to surprise some of the enemy troops. Get closer to them, lean out carefully and start shooting. If you have any grenades with you, it would also be wise to use them here. Aim at larger groups of enemy soldiers. Also, watch out for your teammates. You won't be punished if they die, but it's best to keep them alive as long as possible. 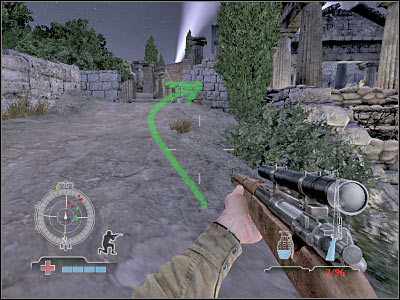 Try going south. You should stay close to the left (eastern) wall. Hide behind one of the large pillars. Start leaning out. This should allow you to take out all of the remaining enemy units. German soldiers will probably be surprised with your attacks, so that's a huge advantage. You will be fighting them at a small distance, so consider using a machine gun, instead of a sniper rifle. 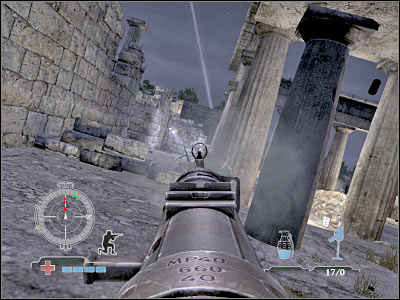 You should be getting closer to your first heavy machine gun post. If you're lucky, one of your teammates will use a grenade here, so you won't have to neutralize it on your own. Otherwise you would have to lean out carefully in order to be able to take out the gunner. Once you've secured this heavy machine gun post, stay here for a little while longer. Choose a sniper rifle from the inventory. One of your allies should approach this structure in the meantime. I wouldn't recommend using the machine gun post on your own. 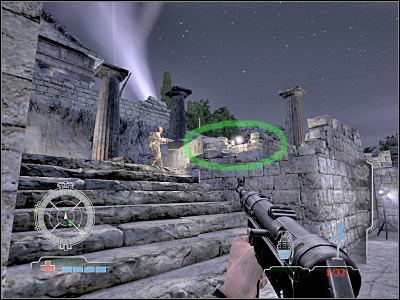 This is going to be a challenging segment of this mission, however if you have a sniper rifle and a lot of ammunition at your disposal, there's nothing you should be worried about. Otherwise you would have to consider assaulting enemy positions in order to fight them at shorter distances. Enemy soldiers will be coming from the east. Most of them will stop near the stairs, so you shouldn't have any problems finding them. Try to take out at least 10-15 soldiers. Remember that you won't have to reach the top of this hill right away. Take your time and kill as many enemy soldiers as possible, especially if you haven't spent too much ammo for the sniper rifle. You should be quite safe here, especially since one of the allied soldiers will be using a nearby heavy machine gun post. Wait for other allied soldiers to advance towards the stairs. Once you're ready, follow them. 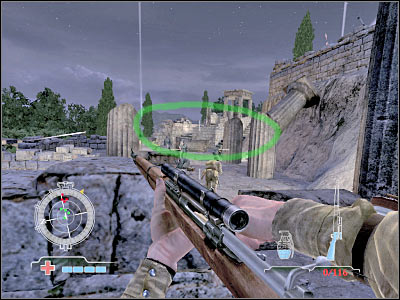 Start moving east, because it's the only passageway to your current destination. You should be able to reach the stairs very soon. Be careful, though. This area may still be guarded by single enemy units. Kill them. Once this is done, head on to the upper level. Start moving south. You should notice a few crates here. Hide behind them. Next, move to the wall, so you won't get shot by anyone. Get ready for some challenging fights. 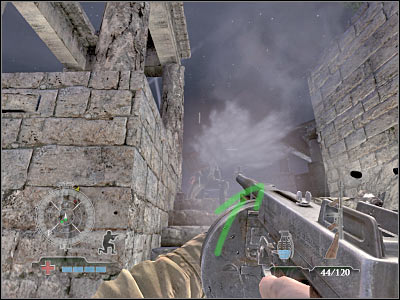 You will encounter a new group of enemy soldiers just around the corner. This is a small passageway which leads to the south. Be careful. Most of the enemy units will be hiding, so you may not notice them at first glance. You will have to secure this entire area. Once this is done, make a few steps forward. The game will display some new objectives here, however you must be standing close to the stairs. 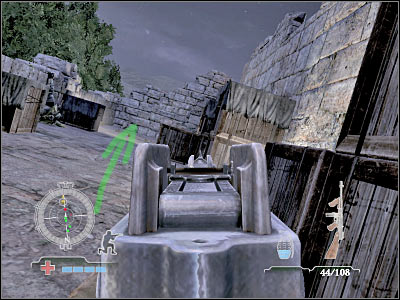