A new or an imported character?

You'll have to decide whether you want to import an old character or create a one at the beginning of the game. I would strongly recommend importing Shepard from Mass Effect 1 as long as you've played the previous game and didn't forget about leaving the saves intact. Using an old hero will allow you to easily transfer all the decisions you've made to Mass Effect 2, including the most important ones (what happened to the Council, Wrex and Ashley/Kaidan).

Important! If you're playing as an imported character you'll also have a chance to change Shepard's looks and the main character's class. The only thing left intact will be your choices! 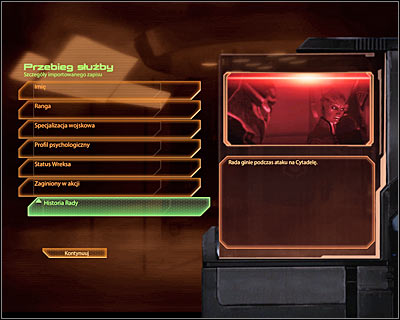 You don't have to remember your previous choices, because you're going to be reminded of them at the beginning of the game.

Thankfully even if you decide to create an entirely new character you won't miss out on any major things. You'll still take part in an interesting journey and you won't have to worry about some of the quests being unavailable. You should also know that you'll have a chance to influence some of the things from your past by answering questions during your trip to the Lazarus station (prologue).

Starting a game with a new hero:

If you've decided to create a new character for the purpose of Mass Effect 2 you'll have to confirm that you want to start a new game and then you'll have to choose a gender. Don't be fooled by not being able to choose character's class and other things, because you'll be allowed to do this after completing a very short introduction on board of the Normandy. 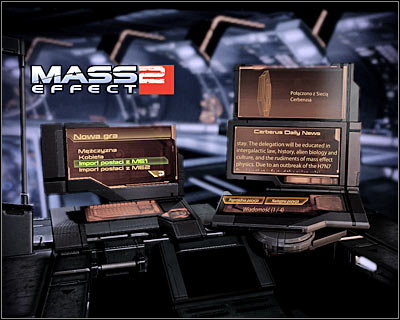 If you've already completed the game you'll also have a chance to import a character from Mass Effect 2. Naturally this is not mandatory - you can ignore this choice and start again by creating another unique hero.

Starting a game with an imported hero:

If you've decided to import an old character from Mass Effect 1 and all you see is a blank window then you'll probably have to tell the game where to look for the saved games.

Here's a complete solution to what needs to be done:

1) Exit the game and eject the DVD from the tray.

2) Insert the game to your DVD again, wait for an autostart window to appear on the screen and choose Configure from the list.

3) Choose Saved Games - it's the last option in the upper left column. Click on a large button to begin the process of searching for saved games from Mass Effect 1.

4) You must now locate a folder with your saved games. Assuming you're using default settings you'll find them on the system partition:

5) Click on the OK button (you won't have to select single files - only an entire catalogue). Close the configurator and don't forget to confirm that you want to save the changes you've made.

6) You may start the game again and this time you should notice that Shepard has appeared on the list (after choosing to import a character). 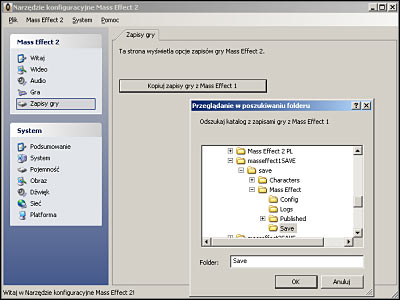 You must click on the button located in the main window to start searching for the saved games. Locate a folder named Save and click on the OK button.

- Even if you decide to import a character from Mass Effect 1 you'll still be forced to start the development process from scratch. This means you won't be allowed to begin the game as a high-leveled hero and you won't be given access to your previous skills and equipment.

Mass Effect 2 is a much easier game than Mass Effect 1. I wouldn't recommend choosing a default difficulty setting (Soldier) unless you're a rookie player. Winning most of the battles on this setting is going to be very easy. Real challenges can be expected only later the game and only while completing primary missions. If you're a more experienced player you should choose between two higher difficulty settings - Veteran and Hardcore. I wouldn't recommend choosing the highest Insanity level if this your first playthrough. Instead you should listen to what the game is saying and finish the campaign on a lower difficulty level first.

All of the remaining fields should be left intact, especially the one allowing your teammates to think and use powers on their own.

Important! You'll be allowed to make other choices AFTER completing a very short introduction (rescuing Joker on board of the old Normandy + several cut-scenes)!

The most important decision you'll have to make before you officially start the game is to choose a character class. You should know that you won't be allowed to skip this step even if you're using an imported character, because all the classes are brand new. Mass Effect 2 gives you a choice of six major classes and you can become: 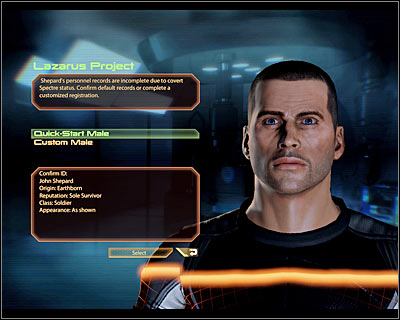 You can finish the character creation process after completing a short introduction on board of the old Normandy.

All the classes ale generally well balanced, however if you're a less experienced gamer then you should consider choosing a partial or a full combat specialist. Doing this will allow you to use several types of weapons. A combat specialist also has to pay less attention to using powers and taking good sidekicks for certain missions. My two candidates are a soldier (he can use many types of guns and slow down time) and a vanguard (awesome biotic attack named Charge). If you're planning on choosing one of the other classes you'll have to rely on your biotic and tech abilities, not your firepower. I think that biotic classes are the easier ones to master (preferably full biotic specialists - adepts), because a lot of enemies are resistant to tech powers. You can find more information about each class from the next section of this chapter - Character classes and powers.

Same rules apply to Shepard's psychological profile (this step is also reserved only for new characters). Choosing a war hero will get you paragon points, choosing a ruthless person will get you renegade points and choosing a survivalist will result in receiving a little of both.

The last step is to choose a special power, however this only applies to a situation if you've already finished the game and you're starting a new playthrough. Otherwise this step will be skipped. You can find out more about the special powers from the Unlocking special powers section of the guide.