During the combat remember, that Shepard companions aren't too smart, so you should control their actions by commanding them to take cover, attack specific targets or move in given direction. Especially useful is command to take cover: your companions seek for nearest obstacle, hide behind it and shoot at enemies.

If you play as adept, avoid to come to the front. Instead stay at the back and attack enemies using biotics (e.g. singularity - talent especially powerful against whole group of opponents when appropriately advanced). You could send your companions at the front then. For this same reason, if you have an adept in you squad, you shouldn't send them at the front. Unfortunately, you can't give commands individually, so adept would run forward with the other member of the squad and expose himself to attacks. On the other hand, character trained to direct combat will be wasted staying at the back. This is why the best solution is to create Shepard-adept or soldier. 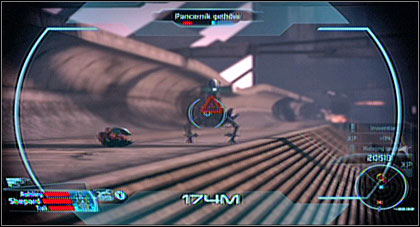 While fighting in Mako remember, that its armor is not very reliable while the distance to the target is short. It's way better to play sniper then. When you perceive enemies, switch to turret view, zoom and eliminate them one by one. In case of bigger vehicles, use the cannon. It's also useful to get rid of the covers. Missiles fired by armatures and colossi can be avoided just by jumping over them.