The guide to Mario Kart Tour consists of an extensive FAQ section where you will find answers to the most important questions. You will learn, among other things, how to get points during races, what are the differences in cc Karts and check all the available bonuses. If you got bored with your current character, you can check information on how to unlock new ones. In case of problems with the gameplay, you can read the chapter dedicated to the controls.

Mario Kart Tour in a nutshell

Mario Kart Tour is a mobile spin-off of the Mario Kart series available in a free-to-play model. The game was developed by Nintendo.

In Mario Kart Tour, you take part in go-kart races as one of the heroes from the well-known Super Mario series. You can race on tracks known from the main series as well as on the new ones inspired by the real cities. Available locations change every two weeks.

The game retains the arcade driving system. The tracks are filled with all sorts of obstacles, jumps and ramps. In addition, we can find power-ups - their skillful use increases our chances of winning.

What are Rubies for?

Rubies are one of the currencies (besides coins) available in Mario Kart Tour. You get them by making progress in the game - you always receive Rubies every time you reach a new level. In addition, you can get them in a gift package that you get for receiving a corresponding number of stars in races and by finishing competitions in one of the top three positions. You can also buy them for real money. 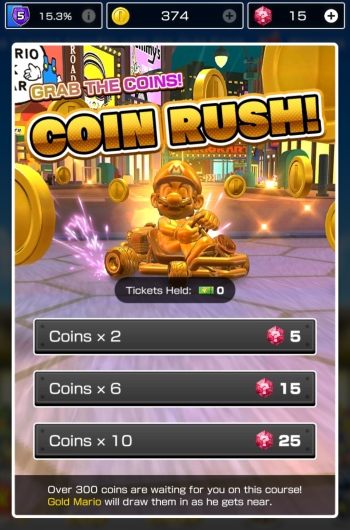 For Rubies, you can buy Coin Rush, an improvement that allows you to increase the number of coins collected during the next race. Depending on the number of Rubies invested, you can get an x2, x6 or x10 multiplier. You can also use this currency to draw prizes.

Currently, multiplayer isn't available. This option is displayed in the menu but it isn't active. Multiplayer will be added in future updates.

Yes. The game contains additional payment options that will allow you to get extra Rubies, as well as early access to some of the characters.

What is a Gold Pass subscription?

Gold Pass is a monthly subscription. It gives you additional items such as extra rewards upon receiving a gift, exclusive items and 200cc. 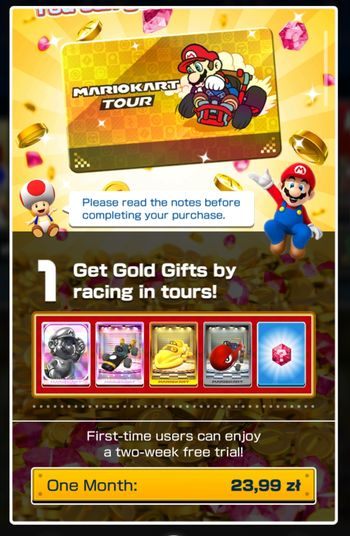 Its monthly cost is $4,99. There is, however, a two-week free trial period. 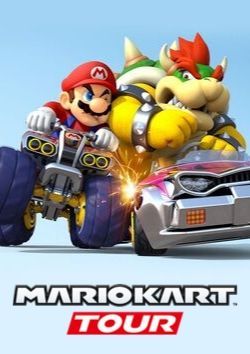 Mobile spin-off of the Mario Kart racing series. In Mario Kart Tour we play as the characters known from the Super Mario series and race both on the well-known and liked tracks, as well as on completely new routes inspired by real cities.

Mario Kart Tour is a spin-off of the Mario Kart series, designed for mobile devices. This racing game was developed and released by Nintendo and is distributed in a free-to-play model.

In the Mario Kart Tour we take part in crazy go-kart races, playing the heroes known from Super Mario games. Among the characters there are famous brothers Mario, as well as princess Peach, Yoshi, Bowser or even Toad. We fight for victory both on the well-known and popular tracks from the remaining parts of the series, as well as on new tracks inspired by real cities. The range of available locations varies every two weeks, some of which are accompanied by special skins for characters.

The driving system is arcade and the go-kart is manoeuvrable with one finger. The trails were paved with various obstacles, jumps and special ramps allowing to ascend to the sky. In addition, you can find power-ups on them, whose skillful use increases our chances of winning. As the latter can also be used by our opponents to defend themselves against them, we can activate the Frenzy mode, in which for a short while we become untouchable, receiving an unlimited number of selected "firecrackers" at our disposal.

As we progress we get stars that can be exchanged for new vehicles and characters. In addition to the standard races in which we try to cross the finish line in the highest possible position, there are also special challenges to check out.

Although Mario Kart Tour only allows you to play alone, online rankings are a substitute for multiplayer mode, where you can show off your achievements..

Mario Kart Tour has colorful, three-dimensional graphics in an eye-catching style characteristic of the series.