This page of the Mafia Definitive Edition guide contains all the most important information about confrontations with police and how to avoid being caught by law enforcement. You'll find out, e.g. how to get the attention of police officers, how to act when you get stopped and how to effectively lose a police pursuit.

How to avoid trouble with the law? 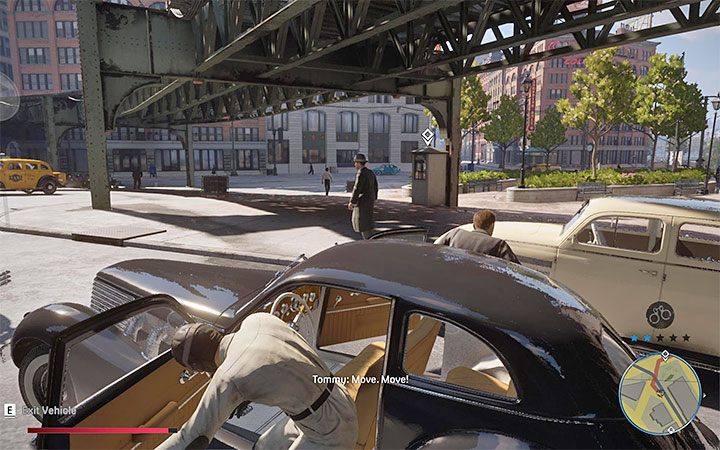 The police in Mafia Definitive Edition is able to respond to both serious crimes as well as minor offenses related to violations of Lost Heaven's traffic laws. Below is a summary of the most important actions that can get the attention of the police: 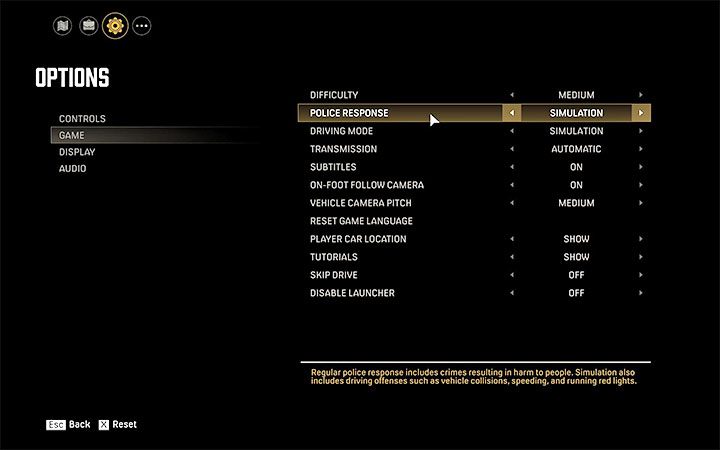 Mafia Definitive Edition allows players to change the "sensitivity" of the police response to the main character's actions. On Regular settings, law enforcement is mostly limited to responding to shooting a weapon, thefts and hitting pedestrians.

On Simulation settings, you must remember that the police officers will react to various types of collisions, exceeding the speed limit and crossing red lights.

You can change this setting at any time in the Game tab  it is completely independent of the overall game difficulty level.

Starting a chase and star system 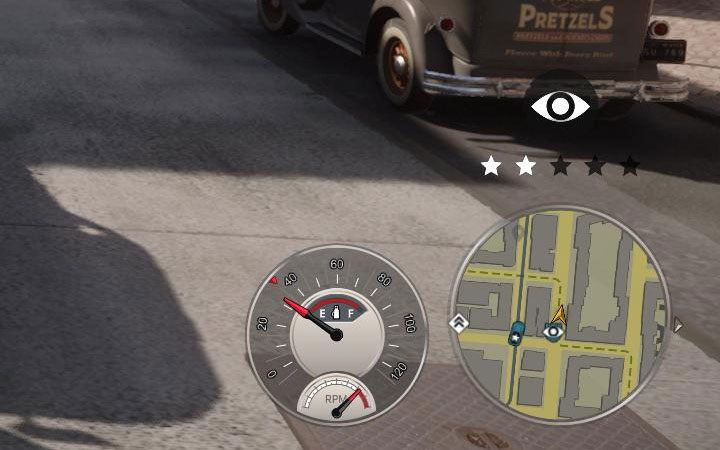 There are two main ways to start a police chase: 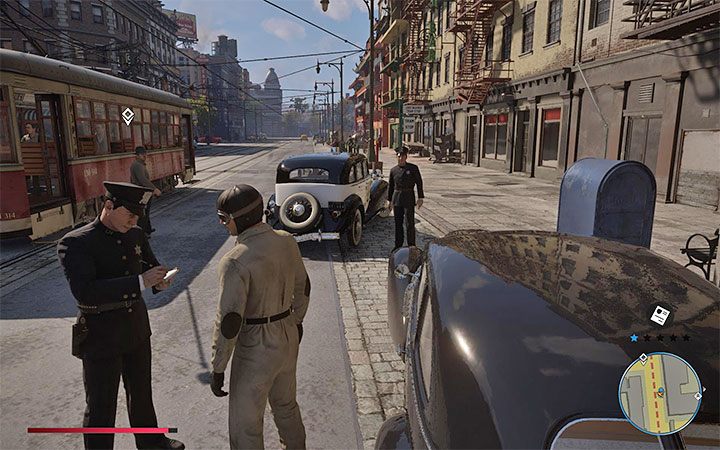 Mafia 1 Remake uses a similar system to the GTA series, using stars to denote the wanted level and the police's "interest" in capturing Tommy. Stars appear above the mini-map along with an icon informing of the planned police response.

1 star doesn't mean serious trouble yet  officers will want to issue a ticket after Tommy is pulled over. Unless you're in a hurry to pass your current mission goal, it's worth stopping, getting out of your car and getting a ticket. It doesn't have any other negative consequences, and it will allow you to avoid a bigger chase. It is worth noting that there is no indicator in the game that tells you how much money Tommy has on him. He will always be able to pay a ticket. 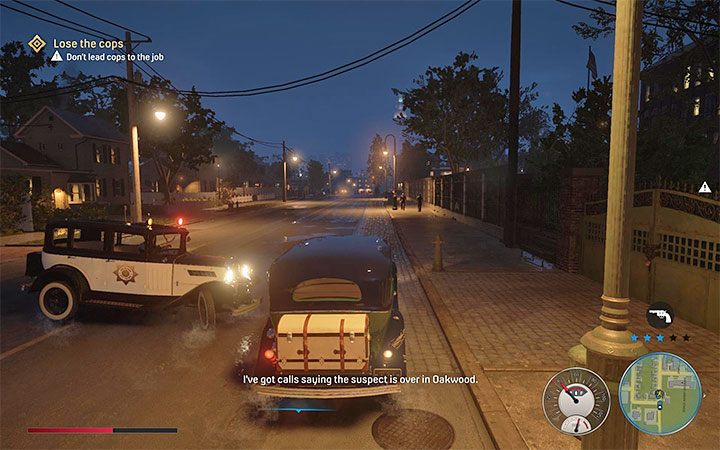 2-5 stars means serious problems, as law enforcement will seek to arrest or shoot Tommy. Regardless of the icon displayed, don't stop at officers' orders, just try to lose a police chase. After you manage to escape the officers, the stars will be reset.

It's worth noting that the more stars you have, the more aggressive the cops will be in trying to get Tommy. At higher levels of pursuit, expect them to use better vehicles, appear more frequently on the map and set up roadblocks.

How to lose a police chase? 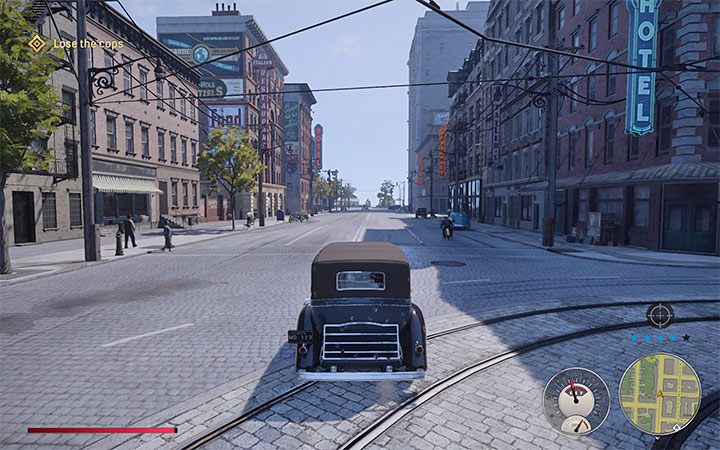 The universal advice for losing a chase quicker is to drive fast and without hitting anything. If the game doesn't force you to use a slow vehicle for a particular mission, try always to pick faster machines from Tommy's garage. It'll make it easier for you to lose law enforcement. Riding a motorcycle isn't a good idea. They are fast, but any collision carries the risk of falling off the bike, which in the worst case could end in death.

When running away, try to choose long and wide roads. This will allow you to gain more speed and maneuver more easily between trams and civilian cars. 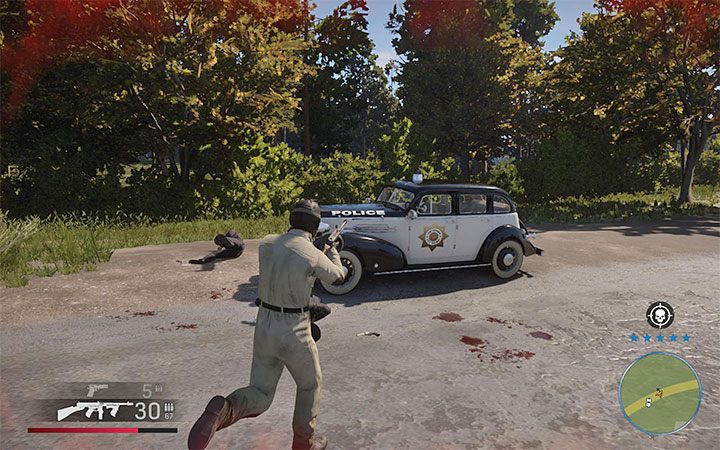 The important information is that you should never choose to escape on foot. If you're not driving the car when the chase begins, try to quickly throw the driver out of one of the cars on the street. If you killed a patrolling officer, you can immediately steal their car, which is sturdy and quite fast. 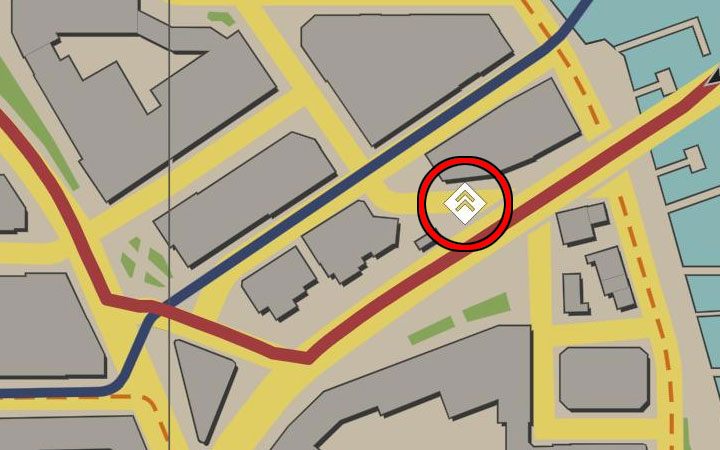 The places marked with arrows on the map can help you lose the chase. These are, for example, roadworks  you can test this mechanic in the first main mission when the characters are escaping in a taxi from hostile gangsters. Police chases work in a very similar way. Drive through such a place should stop at least one police car involved in the pursuit. 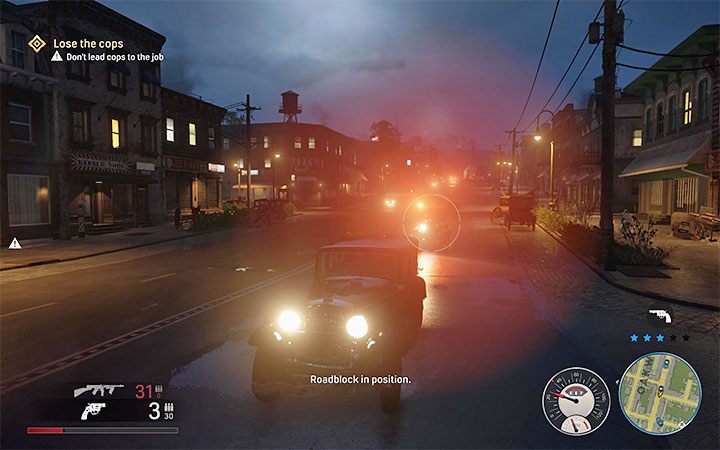 When you are running away from the police, there is a chance of having a direct confrontation with them. Remember to:

1) Shoot while driving  You can only shoot with handguns, but it is still a very helpful option. Several shots at a police car are enough to destroy it. 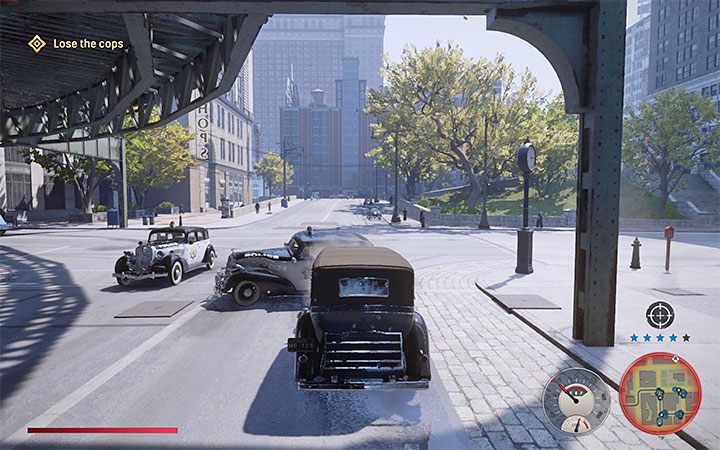 2) Ram other vehicles  This is most useful for police roadblocks that start appearing on higher levels of pursuit. Remember to press the right key to ram a police car. This is not done automatically. 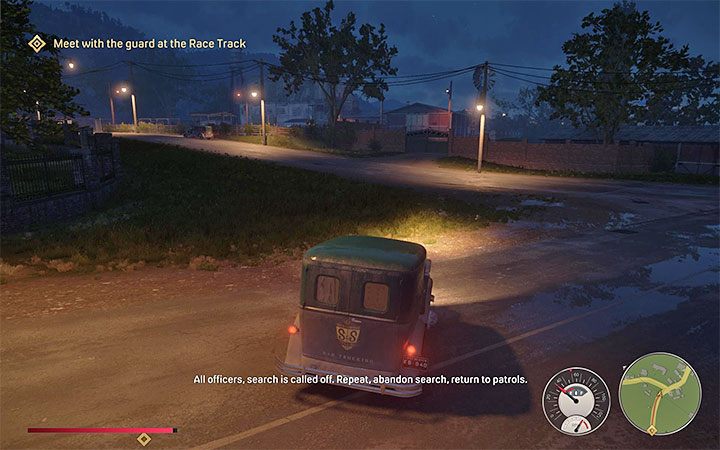 The disappearance of Tommy's pursuers from sight does not immediately end the chase. You are still wanted in the part of town where you were last seen. In the final phase of the chase, focus on observing the markings on the mini-map to avoid police cars and police officers patrolling the area on foot. If you spot an icon of a police car or a police officer, quickly turn into another street or even turn around. It'll keep you from resuming the pursuit.

You must avoid detection as long as the wanted level stars stop flashing and disappear. This will allow you to escape the police force for good. If you commit a crime again later, the next pursuit will not automatically start at the same wanted level at which the previous one ended. It will be treated as an entirely new pursuit.