This page of the guide to Mafia Definitive Edition contains a walkthrough for the main mission 4  Ordinary Routine. You will learn how to break into vehicles, how to reach Clark's motel, how to infiltrate the motel and rescue Sam, and how to stop the bandit escaping in a car.

After the mission begins, enter the bar to meet Salieri and the rest of the crew. You get the task of picking up the protection money from several locations.

Go to a meeting with Vincenzo  he will give you a revolver. You'll get a quick tutorial on how to use firearms  point the gun at the target, press the shoot button, get the ammunition out of the crate, reload the weapon and hide it in the holster (remember to do this every time you don't need the gun at a given time).

Break into the vehicle

Go to the garage to meet Ralph. You will get a lockpick from the mechanic and learn how to pick locks of parked vehicles - you have to hold the key displayed on the screen. This is a better method than breaking windows in cars, as Tommy will not draw attention to himself and there will be no risk of alerting the police. Get in the open car and wait for Sam and Paulie to join you.

The bakery is the first of three locations from where you have to extort money. On the way to it, remember to avoid unnecessary trouble with the law.

Park your car outside the bakery and enter the building. After listening to a conversation with the bakery owner, head to the back. Take the envelope with cash lying on the table next to the woman. Get out of the bakery and get in the car.

The China Store in Chinatown is the second location where you have to collect the cash. You do not need to do any additional activities here. Park your car outside the store and wait for Paulie to pick up the money. This won't happen without complications, but Paulie will take care of everything himself.

Clark's Motel is the last place you have to visit. It is located in a rural area which means you will have a long journey across the northern part of the map. Stay on paved roads and follow the directions of the map. Park at the fuel distributors located in front of the motel's entrance. Watch a longer cut-scene.

Find a way to get inside the motel 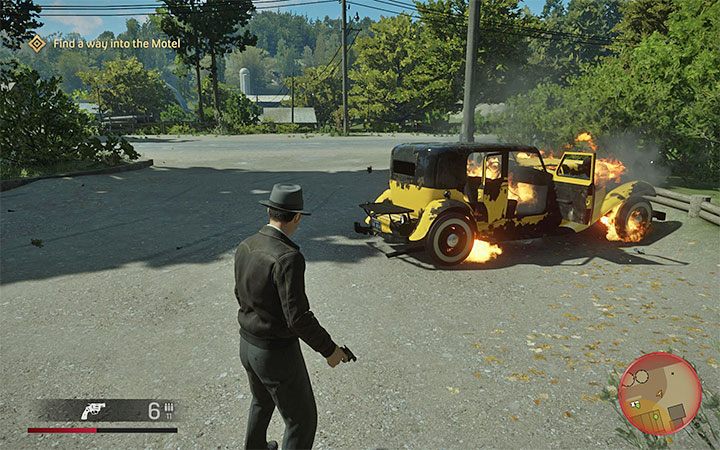 Once you've regained control over Tommy, you will be able to act in two ways. If you don't want to go to the back of the motel right away (it's worth noting that you don't have to rush to save Sam).

There's also a way to make the mission's finale easier. You can then use a baseball bat and a firearm to destroy the yellow vehicle parked there. It will be used by one of the opponents in the final part of the task. Keep damaging the yellow vehicle until it explodes (don't stand next to it). Also, expect that these attacks will bring one of the enemies here. You must defeat him in melee combat or you can shoot him.

No matter how you dealt with the yellow car, go to the left of the motel's entrance. It's worth sneaking here, although this is not mandatory (the sneaking option may not be available if you've shot the yellow vehicle).

Once you are at the back of the motel, you can start climbing the crates shown in the picture. You will reach the upper balconies and the rear entrance to the motel. You can either shoot the guard or eliminate him stealthily.

Once inside the motel, you can still sneak around (if you haven't been detected by now) or start direct fights. If you decide to explore the rooms on the first floor of the motel, then in one of them you can find a useful shotgun.

Find the stairs leading to the ground floor. On the way, you will pass the first aid kit shown in the picture. Do not use it if your health is full or you are only slightly injured. Heal if Tommy has received a lot of damage or come back here later in the mission if necessary.

Start eliminating opponents in the motel lobby. It is best to hide behind one of the walls and lean out from the cover for a brief moment to shoot one of the enemies. But don't let the enemies surprise you by attacking from the flank  watch the mini-map to track the gangsters.

After winning the battle, head to the door between two antlers hanging from the walls. Sam is in a small room  the man is wounded. Finding him will trigger another cut-scene.

Catch the bandit and get the money back

This mission may end in two different ways  this depends on how you behave when you first arrive at the motel. The first option happens when you don't destroy the yellow vehicle parked in front of the motel. The bandit fleeing with the cash gets into the yellow car and starts escaping. Don't shoot the fleeing bandit, just get in the car you drove here earlier. Start chasing the gangster in the yellow car.

You obviously have to avoid hitting objects during the pursuit, but it's important to keep firing while driving. First, always attack the black cars of the other gangsters  they will join the chase in a few places. Try to always wait a while for Tommy to point the gun at the car to make every shot successful. If you manage to get close to any black car, you can also press the ramming button.

Shoot the yellow car with the cash when it is the only car in front of you. Try to be accurate with your shots, although it is worth noting that you have unlimited ammunition during this sequence.

Watch out for obstacles on the road. If you have a feeling that getting past an obstacle will be difficult, you can reduce the speed.

The yellow car will eventually crash. Stop by it, get out of the car and approach the wreckage from the side of the driver's door. Press the interaction key to get the money back. This will end the mission. 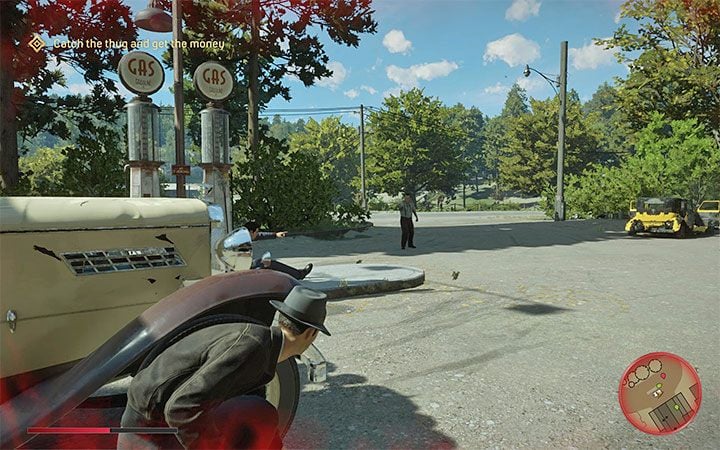 The second ending for this mission happens when you destroy the yellow vehicle. Here, you will have to fight the bandit after he leaves the motel. Try to hide behind a cover as soon as possible  the opponent with cash is armed with a firearm. 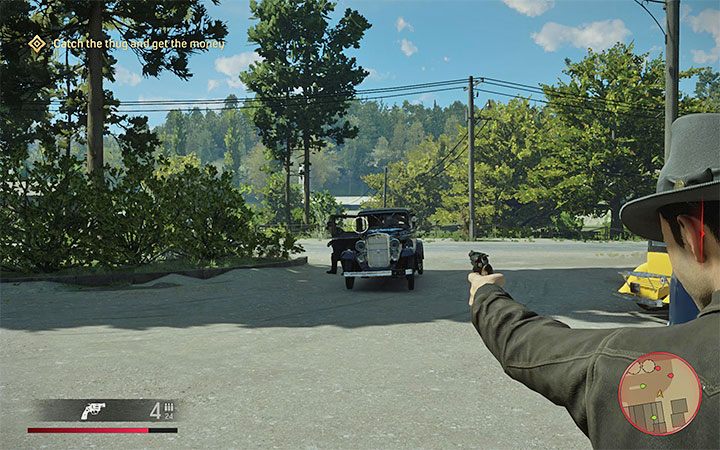 More gangsters arrive at this place in a vehicle shortly after the fighting begins. Try shooting at them before the car stops and they get out of it. Don't forget to keep firing from behind the cover and react to enemies trying to flank you. 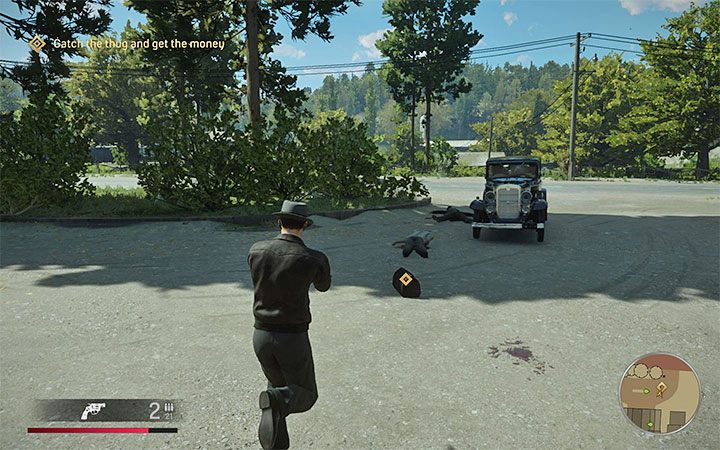 After the fight is over, find the bag with cash lying on the ground. Pick it up to complete the mission.