This game guide is a comprehensive walkthrough to the Lust for Darkness. This solution will help you to finish all chapters of the game and unravel all of its secrets and puzzles. The guide contains detailed descriptions of the most difficult parts of the game. Our guide contains a detailed walkthrough of the whole game and a list of all the puzzles, including a few basic tips and a chapter on the controls and system requirements.

A few basic tips will help you understand the main mechanics of the game and minimize the probability of failure. Our tips are designed to introduce you to the game and get a grasp of the rules governing the gameworld. Thanks to this, you'll lose less time reloading the game and respawning at checkpoints.

Our detailed walkthrough will help you complete the dark history of Jonathan and Amanda. You will learn how to solve puzzles or how to avoid enemies. Thanks to this guide you will easily move through the game-world. You will learn how to deal with the dangers present at the Yelvertons' mansion and how to safely navigate the strange dimension crawling with mutants.

The appendix is devoted to the technical aspects of the game, there, you will find some important information about the game. This includes the system requirements, so that you can check whether the game will run smoothly on your setup, and the controls page will help you get the basic moveset in no time.

About Lust for Darkness

Lust for Darkness is a psychological horror created by independent indie studio Movie Games. The main character of the game is Jonathan Moon, who receives a mysterious letter from his wife and sets out to search for her. Following her instructions, he is taken to the gloomy Yelverton estate, where he discovers an occult organization geared to bodily pleasures. The game is based on the journey through the dark place of worship and the dimension inhabited by mutant beings.

About Lust for Darkness Game Guide 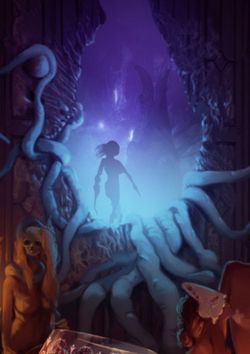 Lust for Darkness is an adventure game with a psychological horror setting. The game has been developed by the independent Movie Games studio and is now available on PC. In order to fund the production of the game, developers completed a Kickstarter campaign.

The story starts when the main protagonist  Jonathan Moon  receives a letter from his wife, who  under unknown circumstances  has gone missing over a year before. After following the information he received during the phone call, he gets to the grim Victorian mansion belonging to the Yelvertones, where a secret occult ceremony is taking place.

As it turns out, the main protagonist gets mixed up in a much deeper plot, in which dark forces out of this world are involved  the mansion is connected with an alternate dimension called Lusst'ghaa inhabited by degenerated beings  hundreds of years ago, these creatures have modified their bodies so that they could experience an everlasting ecstasy.

In the PC release of Lust for Darkness, a player observes the action from the first-person perspective (FPP). The gameplay revolves around the aspect of exploration  during the game, one traverses dark rooms within the mansion as well as the locations in the Lusst'ghaa dimension, which can be entered through the encountered portals. As the main protagonist is unable to fight and the aforementioned dimension is inhabited by the mutated beings, in case of a confrontation, a player is left with no other choice than to run for his life. It is much more reasonable to hide from the danger and sneak past the adversaries.

Also important in the game is the aspect of solving the puzzles by finding particular items  this way, a player can progress through the story as well as learn some useful information about the in-game world.