This page of the guide covers the features and skills of the Warrior, specifically the Berserker Advanced Class. This page lists Berserker's skills and engravings using terminology and builds relevant in 2022. We have also described two builds: Mayhem and Technique Berserker.

Specialization: fill up his Fury Meter during combat to activate Burst Mode to make him much more mobile and make his attacks hit harder. You have to wait 30 seconds for a cooldown. In Burst Mode, he can use a special attack - Bloody Rush. 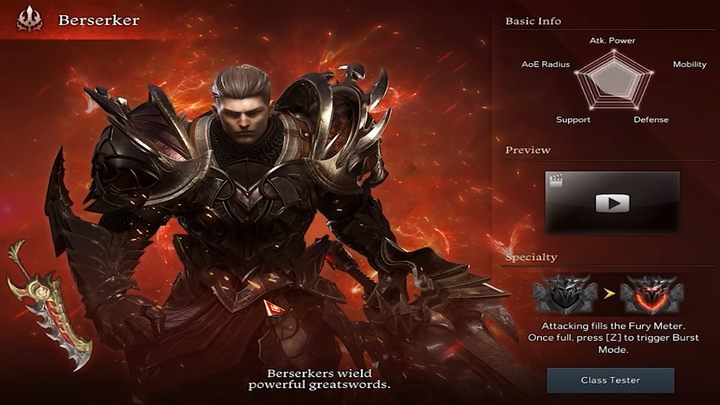 The Berserker is a balanced fighter with great offense and solid defense. This, however, comes at the expense of his dexterity and speed. He's quite slow, with many of his attacks having long recharge times. Berserker's attacks are short-range and often have no additional effects. Still, he's one of the most damaging classes in the game and can also serve as a tank. It's a pretty easy class for beginners.

It's often chosen by those who intend to play solo. All-in-all, a well-balanced fighter.

This character often acts as a DPS with the right build but doesn't have any buffs for team play. The right build increases his speed and strength, making him suitable for PvE and PVP.

Mayhem/Madness is one of the most popular builds for Berserker in Lost Ark. It is "extreme", focused on increasing damage and speed at the expense of health. The engraving used for this build with the same name is characterized by:

The Berserker in this form has very little health - so it's important to avoid being cornered, monitor health, and dodge the hits. To do this, you can use Shoulder Charge, which is an additional dodge option. It's worth noting that the only potions you need now are the ones restoring 30% health - which, for Berserker Mayhem, replenish heath to his maximum level.

Technique Berserker is a simpler build compared to Mayhem. It still focuses on getting the best out of Burst Mode while keeping its standard form. Thanks to this:

Depending on your approach, you can increase the critical damage chance with stats or focus on Specialization to improve the stats and duration of Burst Mode.

During boss fights, Technique Berserker should be placed in the back of the enemy to perform Back Attacks. The proper use of skills that have Stagger will block attacks aimed at you or your allies. Also, keep a close eye on your surroundings - when Burst Mode ends, the build loses its strengths. Don't let it happen when you are in a tight spot.