3  The goal is simple - you must fix an engine. Use character with fire beam (e.g. Iron Man mark 42) to destroy all objects blocking the rotors. After that switch into Thor and recharge a bettery to uncover a gold brick.

4  Stand at the beach, destroying all bushes growing there. Switch your character into Sandman and go through the sand to reach a greenhouse with gold brick hidden inside.

5  Destroy all obstacles blocking the way to the crate with gold brick. Shoot at the silver statue on the left, using Iron Man's rocket attack. Now use Magneto magnetic abilities to take off a metalic bolt from the switch. Turn it on to obtain a gold brick.

6  Destroy Wolverine's silver statue with rocket attack (Iron Man should be a good choice for this quest).

7  Use a computer located on the billboard to make a connection between two power points (click on the arrows twice).

8  Rescue four people from the building, extinguishing all fires. You will find them on every floor (at the roof too).

9  Your goal is to restore a power supply in the building. Use Thor's electrical powers to recharge three batteries: one is on the roof, second is hidden on the right side of the building (between bushes) and the third one can be found near the water.

10  For this quest you should choose a big character - like Hulk or Kingpin. Now just use two basketballs to destroy both goals, throwing at them.

11  Approach to the crate with gold brick and turn right, climbing on the fence. Stand on the switch using a big character and quickly change your hero into a flying character. Now just return to the box and grab a gold brick.

12  Gold brick is closed in the sewer pipe. Stand on it and turn your character back, so you can approach to the hole digged in the ground. Use Wolverine to dig into the sand, then switch into Sandman and go through the dirt and pick up a gold brick.

13  Destroy seven red cars in the designated time - the easies way to accomplish that is to use a Hulk.

14  Use an entrance to the underground to enter the building standing on the right (that's the one with car park). Go to the top floor and toss Captain America's shield at the switch. Now descent to the lowest floor and pick up a gold brick (you must kill all enemies and destroy a yellow container first).

15  Use fire beam to cut your way through the golden gate, then switch your character into Wolverine. Use claw switch to unlock a gold brick - it will show up on the top floor of the building.

16  Go to the top floor of the building and use invisibility skill (e.g. Black Widow's). Pass through the cameras and switch nearby computer on. The gate leading to the gold brick will become open.

17  Descent to the underground, using an entrance on the north-east. Change yourself into Mr. Fantastic and pass through the manhole, located on the left. Now use a computer to open the passage to the gold brick.

18  Enter the building, using a narrow passage hidden near to the train station. Destroy two silver ventilators to clean your way to the gold brick.

19  Destroy all four bushes surrounding the fountain, trying to fit into the designated time.

20  Use Wolverine smell sense to uncover a digging spot, so you can dig it. Now just follow the trace, using your claws on every sand mound.

21  Destroy a mailbox, standing on the east side of the building and switch to Mr. Fantastic. Pass through the manhole to enter the shop - gold brick is hiden there.

22  Fly to the top of the building and use a computer. Choose any flying character and stand on the switches located below in the order showed by first computer.

23  Use a character with invisibility skill (e.g. Black Widow) to pull a lever on the wall. Now make your way through the platforms and poles to finally reach the top floor, where a gold brick is hidden.

24  Stand on the platform above the road and shoot all targets. The easiest way to do that is to use a character with a beam attack.

25  Fly to the roof of the building as Thor and throw your hammer at two fragile elements of the wall. Now recharge the battery and pick up a gold brick.

26  Melt all ice blocks floating on the pool using a fire beam. Turn to Mr. Fantastic to pass through the manhole and recover a gold brick.

27  Choose Wolverine and destroy a plant. Excavate a digging spot and use a smell sense to track a trail - now follow it, digging up several sand mounds. Finally destroy a contener standing at the end of the trail and get a gold brick.

28  Use a character with telekinesis skills (like Jean Grey) to clean the windows - you need to use a sponge.

29  Destroy all boxes using rocket attack (like Iron Man's) then use Spider-Man's spider sense to uncover a crate with gold brick.

30  To receive a gold brick, just destroy four monuments surrounding an obelisk. Two of them are made from silver (so rocket attack will be accurate) and two other are made from gold (use fire beam).

31  Use Ant-Man shrink ability and pass through a maze. Stand on every switch to unlock a box with a gold brick.

32  Descent to the underground, using any fitting entrance (they are on both sides of the building). Switch into a big character and pry open a door, using green handles. Now go downstairs and defeat 20 octobots in the designated time.

33  Use Ant-Man shrink ability to pass through the maze - remember to stand on both rear switches!

34  Use a switch to take control over the car with a huge hammer attached. Destroy all other vehicles to receive a gold brick.

35  Your goal is to rescue all four citizens stucked on the bridge. On the right you will find a car, who needs Spider-Man's attention (use spider-web). Solve this problem and switch into a big character (like Hulk) to move a car located on the left side. Now use Storm wind ability to extinguish the fire covering third vehicle. The last injured can be found above, stucked on the span - put out the fire to finish the task.

36  Extinguish 10 fires to receive a gold brick. Notice that new flames will show up during your work.

37  Race through all checkpoints in the designated time to receive a gold brick. The easiest way to do that is to use a flying character (like Iron Man).

38  Charge battery with Thor, so you can enter the building. Then use Magneto magnetic powers to take off a blockade from the machine.

39  Climb on the roof of the building and switch into a character with invisibility power (e.g. Black Widow). Now pass through cameras and use a switch.

40  To receive this gold brick, you must destroy all 10 superhero statues standing arround the building. Three of them are accesible only for Mr. Fantastic - you must pass through the wentilation shift, which can be found on the wall.

42  Charge both batteries with electricity and enter the building.

44  Use any big character to break two walls standing at the end of the building. After that, stand on every button, trying to fit into the designated time.

45  Warning! This gold brick will pop up on the map after completing the event [41] from the Events Map!

Stand on the top of the building and use a computer with any intelligent character (e.g. Mr. Fantastic). Now cut the energy off, clicking on the arrows.

46  Go to the point [47] and use an invisibility power. Jump through the platforms and poles, heading to the point [46]. Being on that place, just pick up a gold brick.

48  Fly to the tower as Iron Man and use three computers to solve three simple riddles (cut off the electricity, connect machine to the power source and memo game).

49  Fly to the roof and choose a character with telekinetic abilities (like Jean Grey). Move violet bricks to the buttons located at the end of the maze.

50  Stand vis-a-vis to the gold brick and then turn around, going to the opposite part of the roof. Melt gold wall with a fire beam and switch to Venom. Move through the pool and pick up a gold brick.

51  Descent to the underground, using stairs located near to the Daily Bugle. Go to the go-cart hall and use a switch to take control over the vehicle. Destroy all other toys to receive a gold brick.

52  Go to the highlighted area and defeat the droid:

53  Use a switch on the right and then choose a Ant-Man character. Use shrink ability to pass through all three mazes and receive a gold brick as a reward.

54  Fly to the top of the building as Iron Man (Mark 42) and destroy all four fans - both silver and gold. After that jump on the buttons hidden in the damaged ventilator holes.

55  Use a computer to take control over the boat and destroy all other ships. Remember to stay within the designated area, or you will automatically lose! 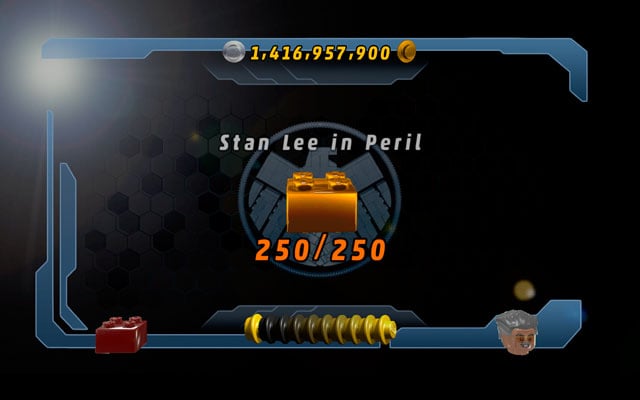 Gold Bricks is a kind of reward, granted for spectacular acts of heroism. You can obtain them through:

During whole gameplay you can collect 250 Gold Bricks, which are required to unlock some of the Deadpool Bonus Missions (see Deadpool Bonus Mission chapter for more information). Remember that you need to collect all of the Gold Bricks to complete the game in 100%. If you missed some of them, just look to the appropriate parts of this guide (we think that map showed above is especially helpful in this case).