This guide to LEGO Marvel Super Heroes contains complete walkthrough, describing every single mission in the main (and bonus) campaign, with specific solution to all important fights and riddles. Text is reader-friendly: players, who are not common with the LEGO genre should look to the Overall hints part, created especially for them. Nevertheless, more hard-core users can read chapters Finishing the game in 100% and Deadpool bonus missions, which are more advanced. Notice that separate chapters of the text focuses on the duels with the bosses and fighting tactics! Furthermore, guide contains description of all collectibles: minikits, comic books, gold bricks, character tokens and Deadpool red bricks. In this compendium you can also find useful information about every Stan Lee in Peril location - both in campaign missions and in the New York city area. Every playable character in the game was described in detail - which applies not only for superheroes, but for arch villains and common people too. Separate parts of the text focuses on the vehicles and different ways to seize them. In this guide you will also find a lot of interesting, useful and transparent maps, which are referring to every significant part of the game (eg. collectables, characters, locations). We hope you will enjoy them!

To sum up, this guide contains to LEGO Marvel Super Heroes : 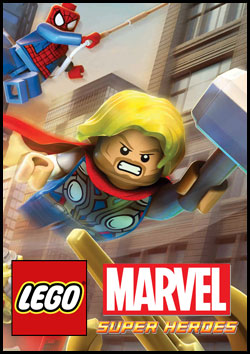 Marvel Super Heroes are assembling for an action-packed, brick-smashing good time! LEGO Marvel Super Heroes is the first instalment in the highly successful LEGO videogame franchise to feature famous Marvel characters.
Smash, swing and fly in the first LEGO videogame featuring more than 100 of your favorite Super Heroes and Super Villains from the Marvel Universe, including Iron Man, Wolverine, the Hulk, Spider-Man, Captain America, Black Widow, Loki and Deadpool.
Help save Earth as your favorite Marvel character with your super-cool strengths and abilities:
- Iron Man flies, hovers, shoots missiles and unleashes a powerful unibeam directly from his chest.
- Spider-Man shoots webs, uses his spider-senses to spot objects invisible to others, crawls up walls and, of course, web-slings.
- Captain America throws his mighty shield at objects and enemies, embeds it into a wall to create a platform, and protects himself from damage.
- Hulk smashes!