Destroy all crates lying near the wall and use Spider-Man's web at the attachment point. Go through ventilation shaft with Mr. Fantastic and take a token.

Defeat Maria Hill in a race - you will find her on the top of the metal tower.

Warning! This mission won't appear on the map until quest for Go-kart (point [2] from Vehicle Map) is accomplished.

Cut a X-shape on the golden wall using fire beam.

Go to cave hidden beneath X-Man school. Now recharge three batteries with Thor: one on the left wall, one on the ceiling and one in the right phillar (behind silver wall).

Warning! This mission won't appear on the map until quest for Black Bolt (Character Map [32]) is accomplished.

Firstly talk to the questgiver, then defeat all enemies.

Go to the beach and switch character to Wolverine. Now unearth token from the mound.

Climb upon the rooftop of the prison and switch into a big character, breaking the gate open.

Toss Captain America's shield at the shield switch to open a crate with a token.

Destroy a plate lying on the ground and kill 15 moles in the designated time.

Take a truck from Punisher and ram target vehicle destroying it.

After meeting with Rocket Rackoon go to the target location. Wanted knife is hidden in the one of containers in a barred lane (near yellow rubbish container). Now just return it to the questgiver and receive a token as a reward.

Take control over the guard with character with telepathic skills (e.g. Jean Grey) and use the computer standing nearby, unlocking token in that way.

Climb on the tower and destroy it with a large character. Descend to the surface and switch your character to Wolverine. Now just dig out a token from the mound.

Token is floating upon the lake.

Go to target location and turn to the right, entering building site. Switch into big character, destroying four blocks of concrete. In the last of them you can find the grate portal - across it with Mr. Fantastic.

Warning! This mission won't appear on the map until quest for Punisher's Truck (point [11] on Vehicles Map) is accomplished.

Destroy target vehicles in any way.

Descend to the basement of the building with a greenhouse. Among bushes you will find a battery for Thor to recharge. When it is done, climb upon the wall and pick up a token.

Token is hidden on the top of the fountain in Central Park.

Firstly descend beneath the bridge, and then fly upwards - token is hidden between two white and blue walls.

Go to park located nearby and switch into a big character, destroying a wall. Turn the computer on using Mr. Fantastic intelligence and take a token from the crate.

Destroy silver sculpture standing on the top of the building.

Warning! This mission won't appear on the map until quest for Iron Man (Heroic Era) (Characters Map [15]) is accomplished.

Defrost four characters for Heimdal: two of them are imprisoned at the surface of the streets and two others are located at the buildings standing nearby.

Fly to the top of Oscorp Tower and destroy silver wall using rocket attack. Switch into Venom and drop through black pool located nearby.

Destroy three spider webs hunged on the rooftop wall and take a token from inside.

Fly to the rooftop of pizza restaurant and unfreeze claw switch with Human Torch. Change hero into Wolverine and use the switch. Go one floor down and use Spider-Man's web at the attachment point, unlocking another device for Wolverine. Standing on the ground activate final switch.

Warning! This mission won't appear on the map until quest for Mr. Fantastic (F.F.) (point [36] on Characters Map) is accomplished.

Defeat Ghost Rider in a race to win his motorcycle.

Go to the top of the building and switch character to Magneto. Take off metal padlock and descend to the ground. Recharge two batteries with Thor or Storm to unlock a token.

Token is hidden above the crossroad - just jump a little to obtain it.

Stand on the roof and choose any character with invisibility power. Avoid all cameras and approach to the computer. Turn it on to open the crate.

Find Blade in the underground and defeat him in a race.

After meeting with Captain Britain you will receive a new quest - bringing back Britmobile. Precious vehicle is located in a place showed on the minimap. Bring it back to the questgiver and receive a token as a reward.

Warning! This mission won't appear until quest for Flower Car (point [15] on the Vehicles Map) is accomplished.

Firstly talk to Groot, and then kill all moles in the designated time.

Warning! This mission won't appear on the map until first quest given by Toad (point [13] on Events Map) is accomplished.

Jump through water lily leafs, trying to fit into designated time. The easiest way to do that is to use a Spider-Man's web abilities.

Warning! This mission won't appear on the map until two other quests are accomplished (Events Map [16] Characters Map [59]).

Talk to the man standing on the street and steal a taxi cab. Now give questgiver a lift to the target location and receive a token as a reward.

Warning! To unlock this vehicle you must collect all: Gold Bricks, Red Bricks, Minikits, characters, "Stan Lee in Peril", vehicles (except Deadpool's Helicopter) and True Believer Statuses. Besides, you must also finish all main and bonus missions concluded in the game.

Go to the target location and defeat Deadpool in a race. Before that, get really good vehicle- enemy is very fast and cheats a lot.
After the race you will unlock next mission - see Vehicles Map [40].

Warning! To unlock this vehicle you must collect all: Gold Bricks, Red Bricks, Minikits, characters, "Stan Lee in Peril", vehicles and True Believer Statuses. Besides, you must also finish all main and bonus missions concluded in the game. This quest appears on the map after winning the race for Deadpool's Scooter (see Vehicles Map [39]).

Talk to Deadpool and go to the location pointed on the minimap. Destroy pink container and pick up the machine gun hidden inside. Now return to the questgiver.

In this very moment you will unlock the last mission in the game - see Character Map [64]. 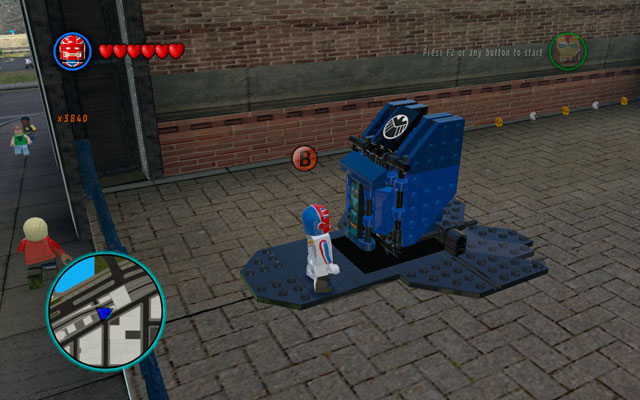 They are 61 vehicles in the game - majority of them can be unlocked during exploration of the New York City hub. They are quite easy to obtain: you must complete referred quest first and then go to the one of the blue vehicle stations (located in large numbers in a whole area) to finish transaction - as screen above shows. After all, remember that vehicles can be very costly! 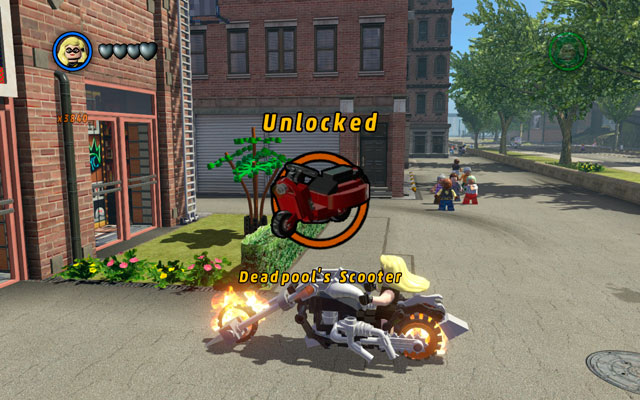 Unlocking and buying all vehicles are required to finish the game in 100%.