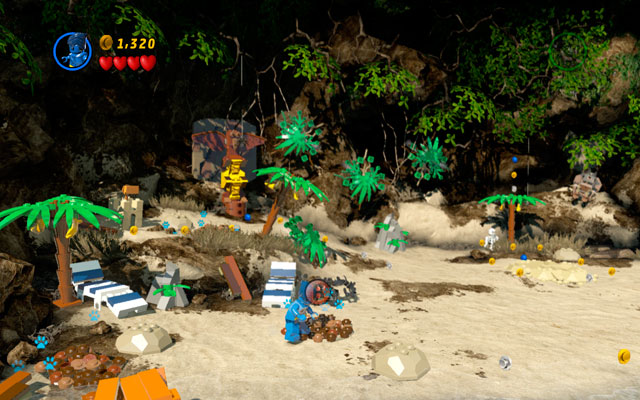 On the beginning of the stage turn left and choose a character with claws (like Wolverine or The Beast). Dig three sand piles arranged in the triangle shape and build a crab from the debris. 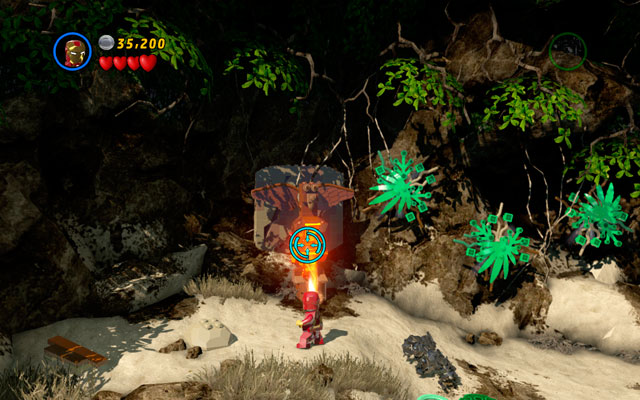 Turn right and head to the rock wall in the interior, approaching to the gold statuette. Melt it with a fire beam, so you can destroy a fragile slab standing behind it. Then build a sandbox from the debris. 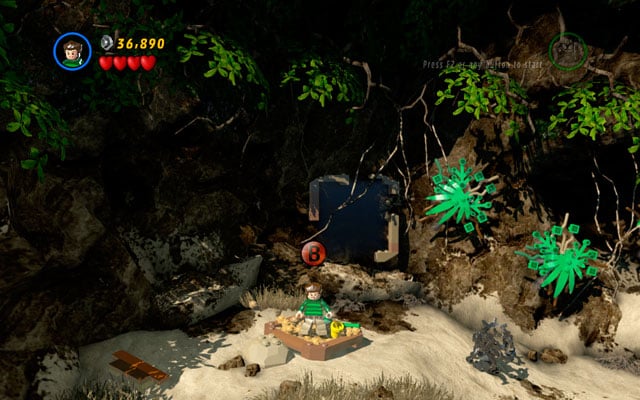 Choose Sandman to pass through the sand and obtain a minikit. 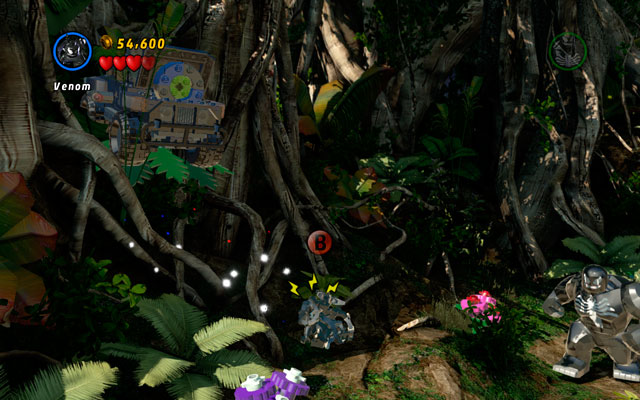 Go through the first electric gate and kill all enemies in the area. Then approach to the trees growing on the left side of the glade. Choose Spider-Man or Venom and use your spider sense to uncover an attachable point. Yank it with a web and pick up a minikit. 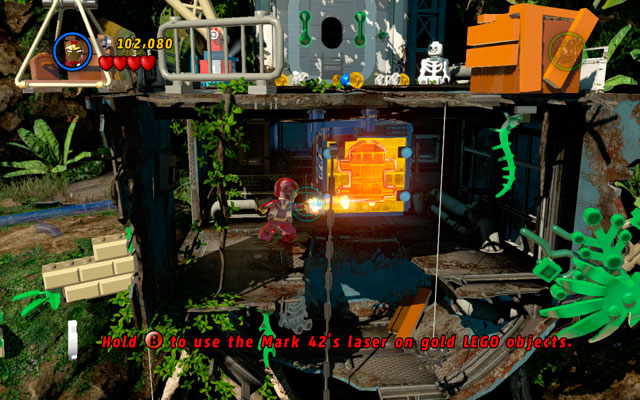 Turn right and go onward. Approach to the building with a crane and search it for a golden gate. Melt it with a fire beam to uncover next minikit. 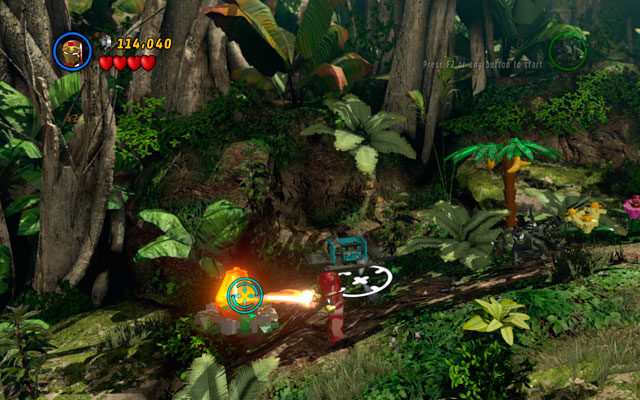 To get this minikit, you must melt five golden eggs. First of them is located at the starting point of the second location, on the left side of the jungle. 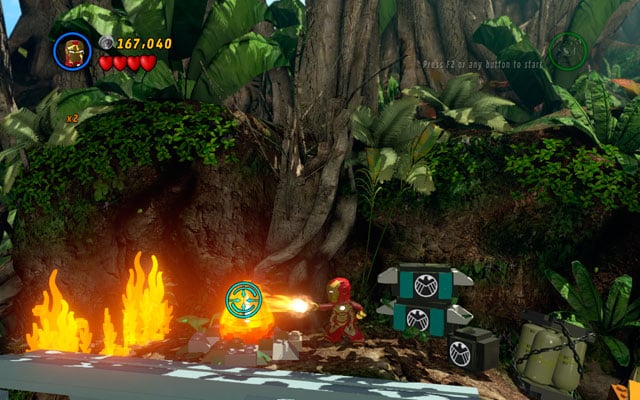 Second one is hidden on the right, near to the S.H.I.E.L.D. boxes and some flames. 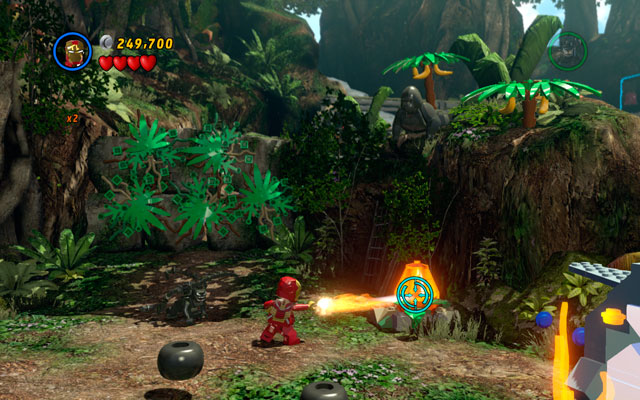 Third one can be found under the gorilla, near to the place with constructible engine. 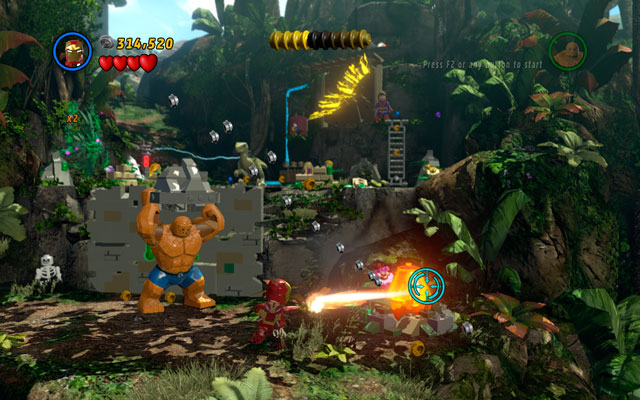 Fourth egg is located a little bit on the right, just under the wall. 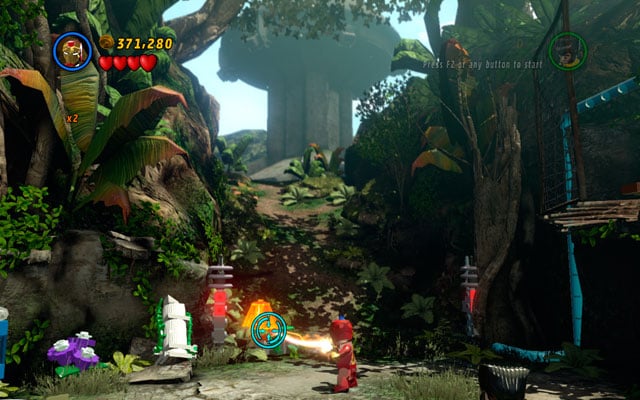 Final, fifth egg can be found near to the exit from this stage, vis-a-vis to the bunker. 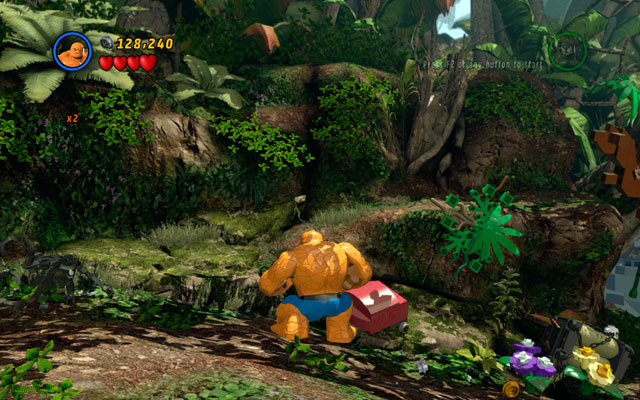 To obtain this minikit, you must destroy four red trunks. First of them is lying at the path at the beginning of the second stage. 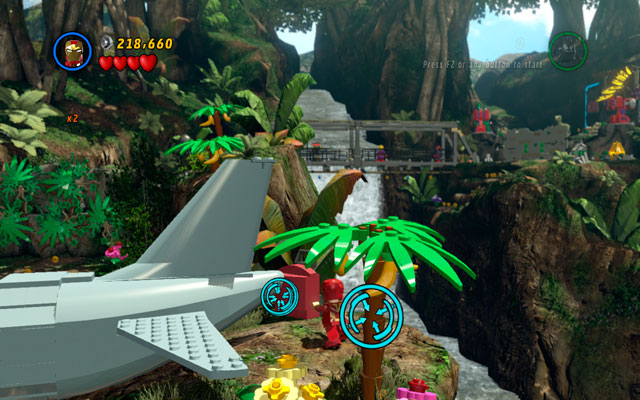 Second one is hidden behind the aeroplane's tail, at the slope. 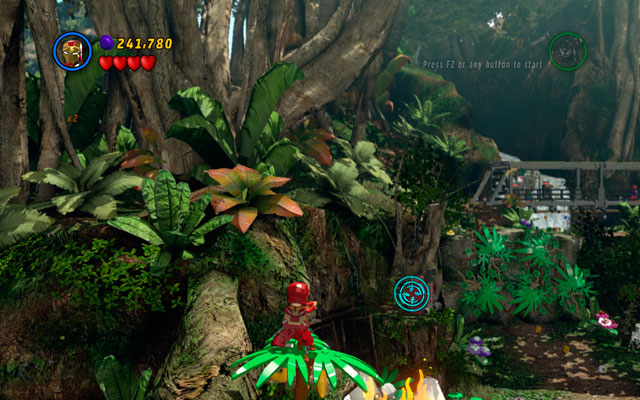 Third one is located at the rock platform, little above from the flames and eggs (you will find Stan Lee there). 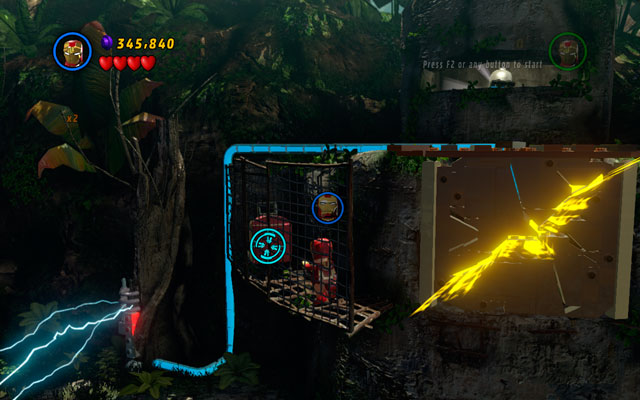 The last trunk is hidden in the bunker at the end of this stage, on the left. 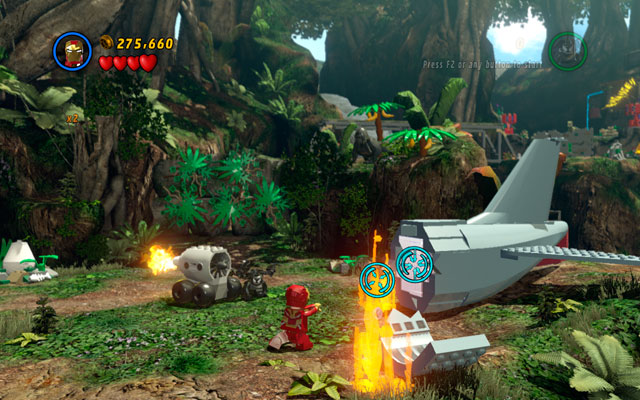 Go to the shattered aeroplane and use Iron Man's rockets to destroy silver plate on the tail - that's the only way to uncover this minikit. 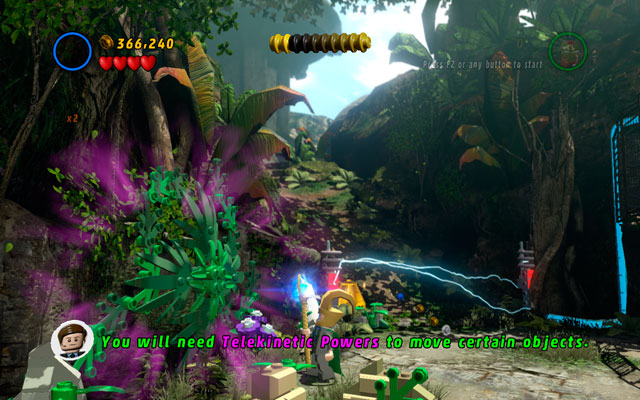 Vis-a-vis from the bunker you can find a huge shrub. Manipulate it using Loki's telekinetic skills to obtain some bricks. Then build iron bars from the debris and pass through the passage using Mr. Fantastic ability. 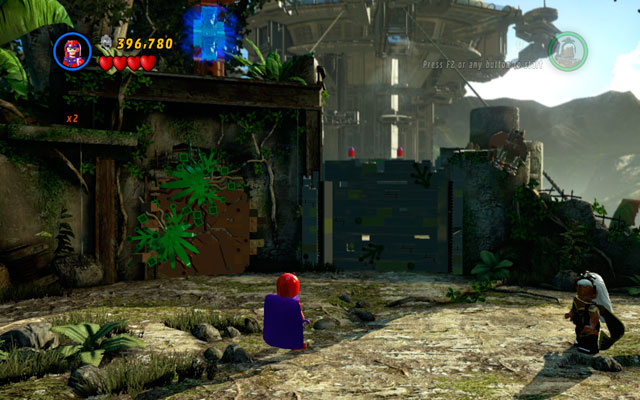 Reach to the final, third stage and choose Magneto. Approach to the metal sculpture located above and manipulate it to obtain next collectible. 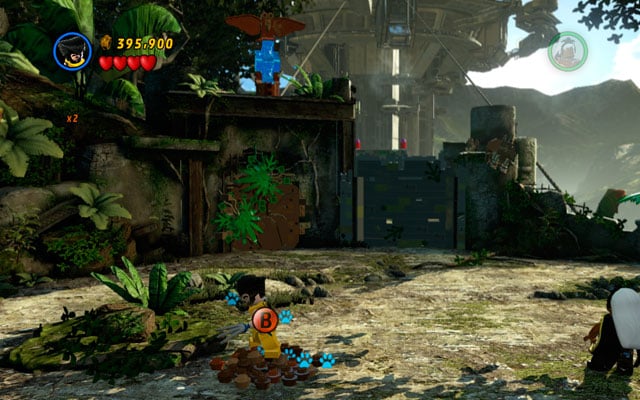 To obtain the last minikit, you need to unearth five pumpkins hidden in the sand piles. First of them can be found at the very beginning of the stage, on the left - use Wolverine's claws to dig priceless vegetable out. 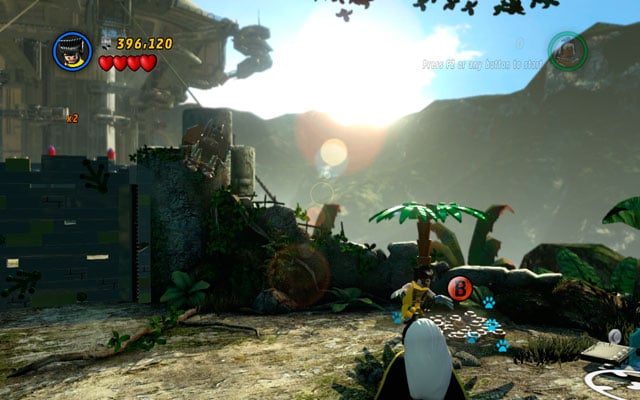 Second one is hidden very close, several steps to the right. 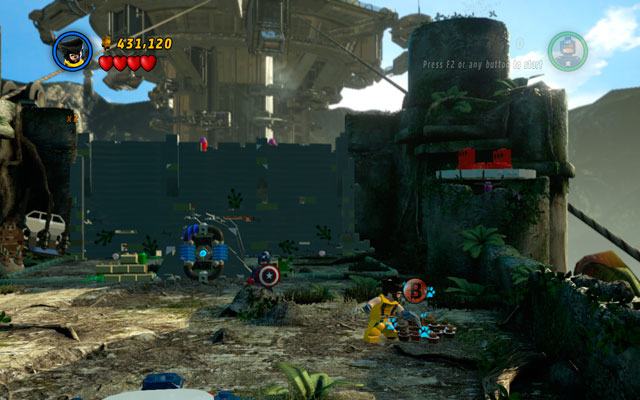 Third sand pile can be reached after destroying the first wall. It is located on the right side, under the cannon. 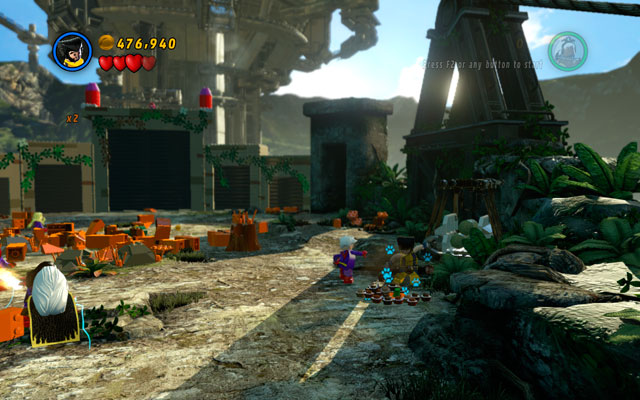 Fourth one can be found during the boss fight. Pumpkin is buried on the right side of the arena. 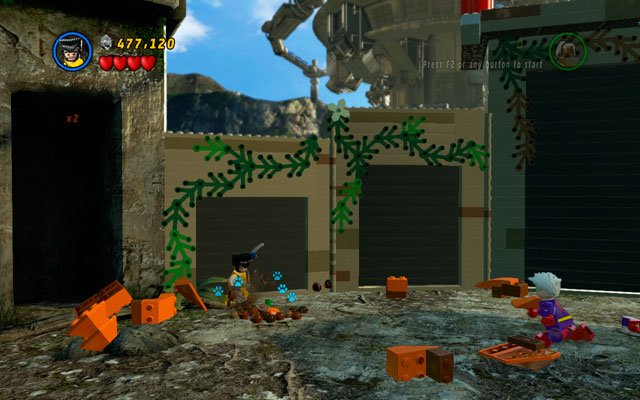 The last pumpkin can be found on the same stage, in the upper-left corner.