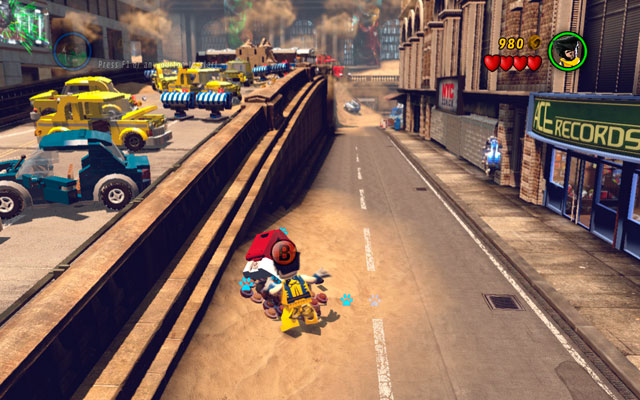 At the beginning of the stage jump down from the street and turn right, looking for the pizza motorcycle - dig it up with Wolverine. Now return to the ramp and destroy all obstacles using Iron Man's rockets (you must wet a sand wall using two hydrants). Go to the motorcycle once more and drive to the location showed by studs - restaurant. First minikit is hidden inside. 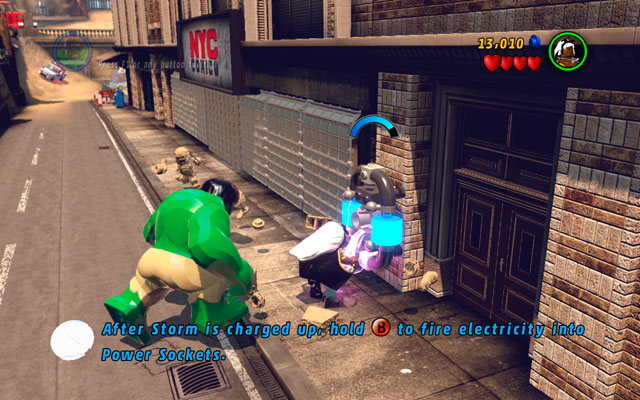 Approach to the battery on the right side of the location as Storm and charge it with electricity. Now switch into Spider-Man and yank the door using your spider-web. 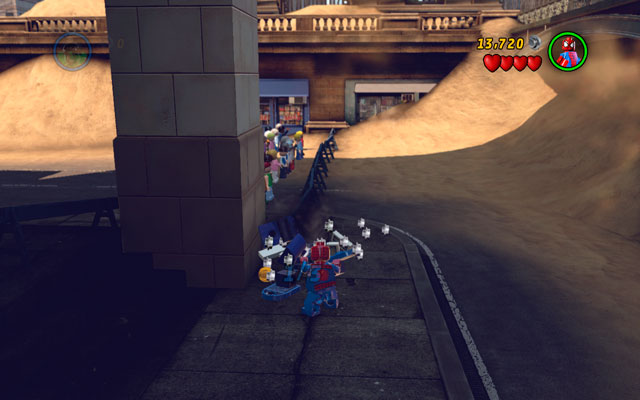 Demolish three mailboxes - two of them are located on the left, but the final one is hidden behind the restaurant on the right. 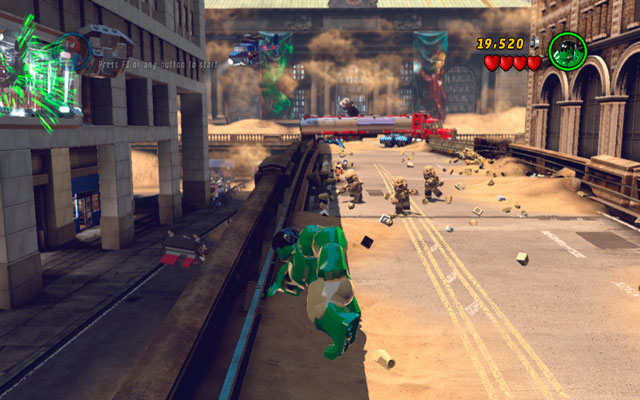 Use Hulk superstrength to pull out a stone from the ground (hold an interaction button to do that). Now throw it at the green wall on the left. When it's broken, choose a flying character and pick up a minikit hidden in the hole. 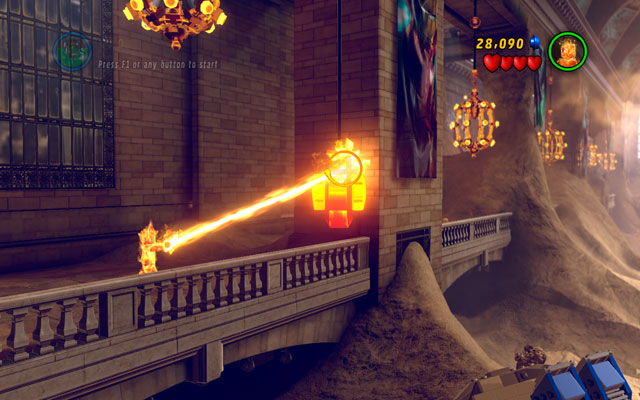 Enter to the station and then choose Human Torch - fly to the balcony on the left side of the building and melt the golden device attached to the pillar, using fire beam. 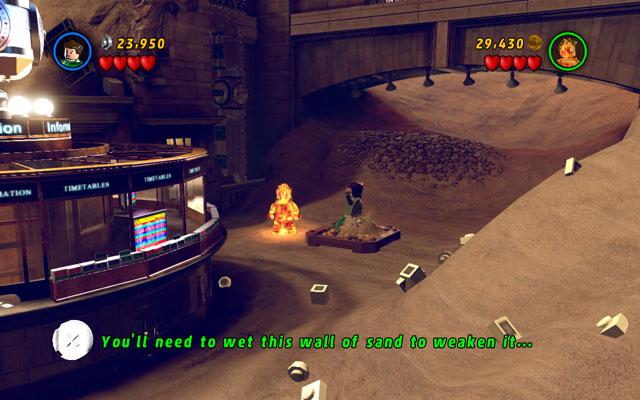 Standing next to the silver globe turn right and switch into Spider-Man. Use your spider senses to uncover an attachable point, then yank it with a web. Now melt golden valve with Human Torch. After that choose Sandman and pass through the sandbox. 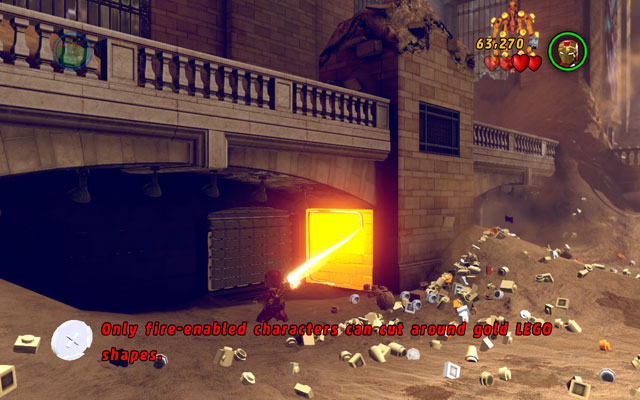 During the fight with two sand cannons turn left and approach to the golden wall. Melt it as a Human Torch to uncover a claw switch. Use Wolverine's claws to unlock it and then change your hero into Jean Grey. Take control over a man standing behind the window to get a minikit. 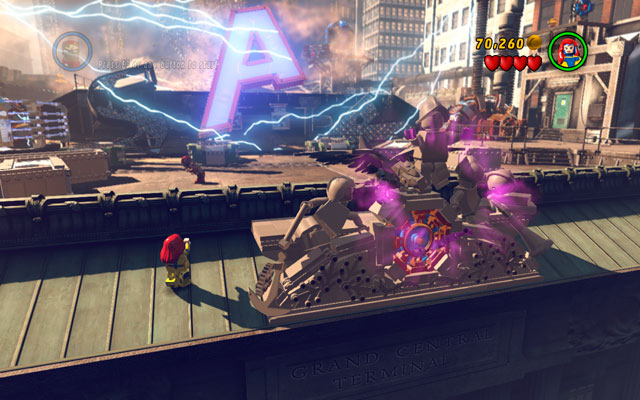 During the first stage of the boss fight turn your character back and approach to the big clock, located on the top of the building. Use Jean Grey's telekinetic abilities to move it, so you can get a minikit. 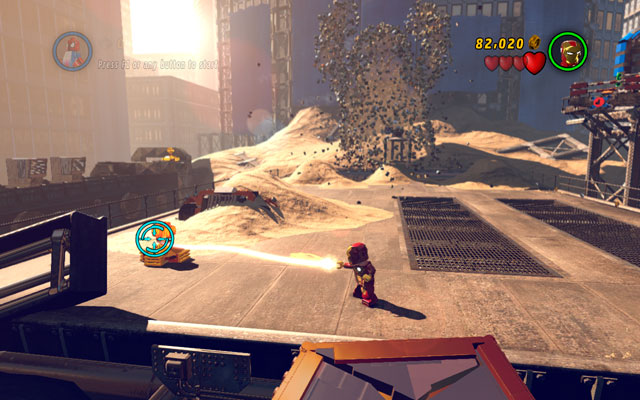 To collect this minikit you must melt five gold ventilators. You will find them at the corners and in the middle of the stage. To destroy them, use Human Torch or Iron Man (Mark 42) beam attack. 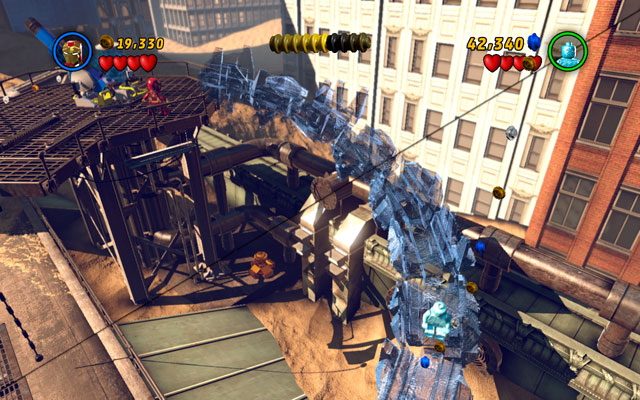 The final minikit can be obtained after destroying a silo and building a water pump. Approach to the pool and freeze it using Iceman ability. Now just slide down through the chute that you have just created.